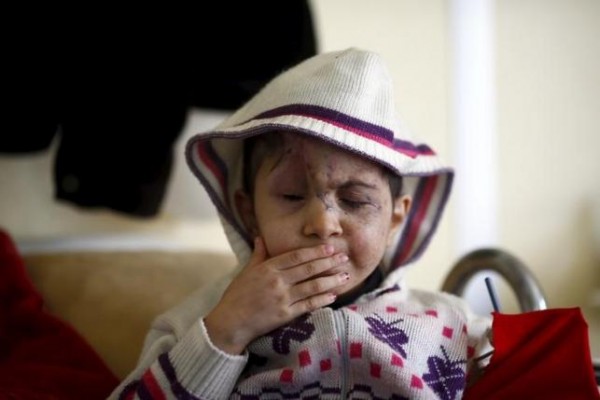 Five-year old Sheima, who lost both eyes when hit by a stray bullet in Syria, sits on her hospital bed in a small clinic near the Turkish-Syrian border in the southeastern city of Kilis, Turkey February 9, 2016. REUTERS/Osman Orsal
Share:

In a field hospital in the Turkish border town of Kilis, wounded Syrian opposition fighters say Russian air strikes have brought their campaign against President Bashar al-Assad’sforces and Islamic State militants to the brink of collapse.

A major offensive in the countryside around Aleppo by Syrian government forces, backed by Russian bombardment and Iranian and Lebanese Hezbollah fighters, has choked opposition supply lines and left the rebels at risk of losing their northern power base.

A last-ditch intervention by Sunni Muslim backers including Turkey, Saudi Arabia and Qatar could save their insurgency, they say, in a strategically critical part of Syria divided for years between government and rebel control.

“If it wasn’t for Russia, we would have chopped Assad into pieces by now. This war was almost over four or five months ago. Then Russia came in,” said Qasim, 23, a member of Failaq al-Sham, one of several rebel groups around Aleppo, who said he had been injured 10 days ago in clashes northwest of the city.

“If Turkey, Saudi and Qatar enter with their soldiers this war would be over in a month. Turkey has sent weapons and assistance but now it should help us more. We’re fighting everyone here: Assad, Islamic State, Hezbollah, the PKK (Kurdish militants),” he said from a hospital bed, his arm bandaged.

Saudi Arabia has said it is open to sending in special forces as part of a U.S.-led coalition against Islamic State, while the United Arab Emirates has said it too could supply ground troops to support any international coalition.

A senior Turkish government official said there were constant joint assessments with allies about what could be done in Syria but there were no preparations for any operation with Riyadh involving a ground incursion or large numbers of troops.

The Russian-backed Syrian government advance over recent days amounts to one of the biggest shifts in the balance of the war. It threatens to wipe the insurgents out of one of their strongholds in the northwest and bring Syrian and allied forces to around 25 km (16 miles) from the Turkish border.

Kurdish-led YPG fighters have capitalized on the shifting balance of power, seizing villages from the rebels in gains which have alarmed Turkey. Ankara views the YPG, which has enjoyed U.S. support against Islamic State in some parts of Syria, as a terrorist group with deep ties to Kurdish PKK militants who have waged an insurgency in Turkey’s own southeast for decades.

Qasim’s rebel faction last month merged with other groups to form a new entity called the Northern Brigade, part of an effort to forge a stronger front as pro-government forces intensified their assaults.

But the strategy appears to have been in vain.

Territory northwest of Aleppo is held by opposition forces and Kurdish groups, but areas to the northeast are controlled by Islamic State. In the Kilis clinic, where around half of the 47 beds are taken up by opposition fighters, talk is of how the radical jihadists are benefiting from the government advance.

A fighter from the Levant Front rebel group who gave his name as Mohammed Ali, 27, said Islamic State surrounded his village and his small band of around 20 fighters near Baraghedeh northeast of Aleppo around 10 days ago.

“I was the commander. They started shooting at us hard. I lost four of my men and was hit by a bullet on my elbow,” he said, showing an X-ray of the smashed bones in his arm.

“About 15 minutes into our battle with Islamic State, Russian warplanes came and started dropping bombs. It wasn’t a fight, it was a massacre. It’s all planned,” he said.

Like others in the post-surgery field ward – some who had lost arms or legs, others blinded by shrapnel – Ali had heard news reports that Saudi Arabia had offered ground troops.

“God willing that would be true. With Saudi troops behind us, we can kill them all, and get back our country,” he said.

Doctors and nurses take those who are well enough in wheelchairs into its small gardens in the February sun.

While some talk with determination of returning to the front lines, the overwhelming sense is of a battle rendered hopeless by international indifference, and particularly by what the rebels see as abandonment by the United States.

“America stopped giving weapons. They supported the Kurds and Russia started bombing us from the air,” said Muhammed, who said he fought for the Ahrar al-Sham rebel group for three years before being shot in both legs by a Kurdish sniper.

“We have the world against us. Assad, Iran, Russia. We are fighting them all. They all help each other and we are alone,” he said. He was done with fighting and would settle with his brother in the Turkish Mediterranean city of Alanya, he said.

“We won this war, but the West didn’t hand us our victory.”