Flight D3159:Somalia plane bomber was meant to board Turkish flight 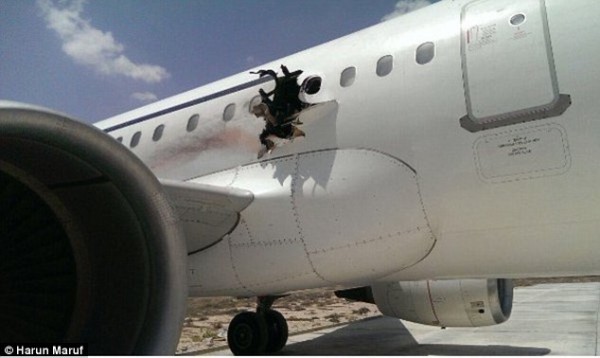 A suspected suicide bomber who blew a hole in the fuselage of a Daallo Airlines plane last week and forced it to make an emergency landing in Mogadishu was meant to be on a Turkish Airlines flight, Daallo’s chief executive said on Monday.

The bomber was sucked out of the plane through the 1-metre-wide (1-yard-wide) hole when the blast ripped open the pressurized cabin in flight, officials said. The pilot landed the plane in the Somali capital, from where it had taken off.

No group has so far taken responsibility for the attack but U.S. officials said on Monday the United States suspects Islamist militant group al Shabaab, which has links to al Qaeda, was responsible for the blast.

Daallo Airlines chief executive, Mohamed Yassin, said most of the passengers who were on the bombed flight were scheduled to fly with Turkish Airlines, but were flown to Djibouti by one of his planes after the Turkish carrier canceled its flight, citing bad weather.

“That particular passenger (who was behind the blast) boarded the aircraft on a Turkish Airlines boarding pass and was on the list for the Turkish Airlines manifest,” Yassin told Reuters by telephone from Dubai.

Yassin said Daallo picked up the 70 stranded Turkish Airlines passengers to fly them to Djibouti, including the suicide bomber. In total, the flight had 74 passengers.

Turkish Airlines spokesman Yahya Ustun confirmed the carrier had canceled a flight to Mogadishu last week due to bad weather and said the company will not make any further comment.

Somalia, mired in conflict since civil war broke out in 1991, has few air links outside East Africa. In 2012, Turkish Airlines became the first major international commercial airline to fly out of Somalia in more than two decades.

Mogadishu’s heavily guarded airport, which is often compared to the Green Zone in Baghdad, has several safety perimeter fences and checkpoints. It houses a large U.N. compound along with several other Western embassies.

Somali officials said an investigation had been launched and arrests made, including airport workers.

U.S. officials said investigators believe the bomb was hidden in a laptop computer, and that the bomber had some type of connection to airline or airport personnel.

CCTV footage released by the Somali National Intelligence Agency (NISA) appears to show two airport workers inside the terminal handing the suicide bomber a laptop, according to the government spokesman.

“Some of the people that we have arrested are cooperating,” spokesman Abdisalam Aato told Reuters. He said security at the airport has been stepped up and that the government was seeking new technologies to improve screenings.

Al Shabaab, which wants to topple the government and impose a harsh version of Islamic law, has targeted the airport in the past. It has also attacked the Turkish embassy in Mogadishu.

Yassin said Daallo has been reassured by Somali officials that security was being improved, and will keep flying to Somalia. We have been there for 25 years,” he said. “Our efforts to keep Somalia linked to the rest of the world will continue.”