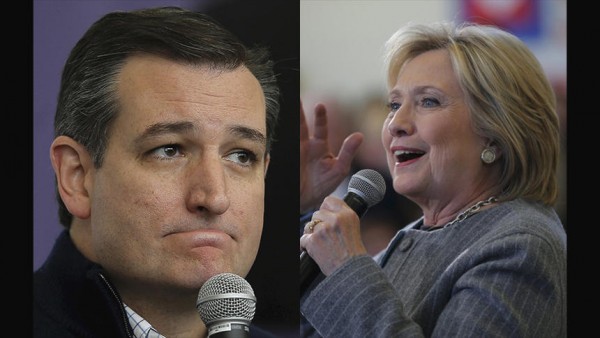 DES MOINES, Iowa — Republican Ted Cruz had a slight advantage over Donald Trump while Democrat Hillary Clinton held a small lead over rival Bernie Sanders on Monday in Iowa’s presidential nominating contest, the first in the 2016 race for the White House.

Cruz, a conservative U.S. senator from Texas, led the billionaire businessman 29 percent to 25.6 percent with 44 percent of the precincts reporting results in the Midwestern U.S. state.

Clinton, a former secretary of state, held a lead of 50.8 percent compared to 48.6 percent for Sanders, a self-styled democratic socialist U.S. senator from Vermont, with 64 percent of the precincts reporting.

“They say the record crowds are good for us so we’ll see what happens,” Trump said, acknowledging he was “a little bit” nervous.

A Cruz win would upset momentum for Trump, who is leading in national polls for the Republican nomination.

“We can and we will get back to the founding principles that made America great,” Cruz said on Twitter.

A win for Trump could validate a campaign that has alarmed the Republican establishment, dwarfed the efforts of many seasoned politicians and been marked by controversies such as his calls for a temporary ban on Muslims entering the United States and for a wall along the Mexican border.

Iowa has held the first nominating contests, called caucuses, since the early 1970s, giving it extra weight in the U.S. electoral process that can translate into momentum for winning candidates. The caucuses are voter gatherings that take place in 1,100 schools, churches and other public locations across the Midwestern state.

The 2016 election is shaping up to be the year of angry voters as disgruntled Americans worry about issues such as immigration, terrorism, income inequality and healthcare, fueling the campaigns of Trump, Sanders and Cruz.

On the Republican side, opinion polls show foreign policy hawk Marco Rubio, a U.S. senator from Florida, might win third place in Iowa and stake a claim as the best hope for the party’s mainstream. He was in third with 20.7 percent.

For the Democrats, Clinton needs a win in Iowa to prevent a potential two-state opening losing streak that would raise fresh questions about a candidate who was considered the clear front-runner just two months ago. Sanders is leading in polls in New Hampshire, the next state to hold a nominating contest.

Clinton began her day at her campaign’s south Des Moines field office, where she served roughly 60 volunteers donuts and coffee. An extensive ground operation, much like Obama’s as a candidate, has been cited as one of her advantages.

A former U.S. senator and first lady, Clinton often touts her years of experience in politics, and says she will defend much of Obama’s legacy. Sanders has attacked from the left and promised to do more than Clinton to help American workers.

Clinton, who lost Iowa in 2008 and went on to lose a protracted primary battle to Obama, told ABC’s “Good Morning America” program that it would be different this time, adding, “I think I’m a better candidate.”

Sanders said he was pleased with his performance.

“We’re very proud of the campaign we ran,” he told CNN.

Live Iowa caucus results, as they come in https://t.co/RkSlWX5ZHh pic.twitter.com/CBGgIQrG9F

Martin O’Malley will suspend his campaign for the Democratic presidential nomination https://t.co/ELxXZaFVBl