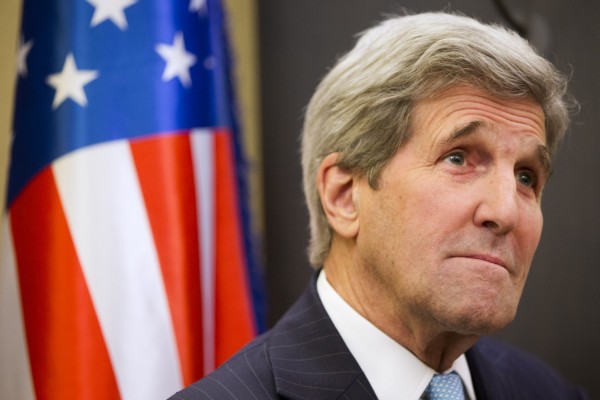 US Secretary of State John F. Kerry acknowledged Thursday that some of the money Iran receives from sanctions relief may be used to fund terrorist activities, but he said the Obama administration does not believe it will increase the threat to U.S. allies in the Middle East.

Speaking to reporters at the World Economic Forum, Kerry said Iran has too many pressing domestic needs to devote much money to the hard-line Revolutionary Guard Corps and its support of groups that the United States and Iran’s regional rivals consider terrorists. Under the nuclear deal implemented last weekend, Iran has access to as much as $55 billion of its estimated $100 billion in unfrozen assets.

“The calculation is that the demands of Iran and of the Rouhani administration and of the supreme leader for development in their country are such that there’s no way they can succeed in doing what they want to do if they’re very busy funding a lot of terrorism,” Kerry said. He was referring to Iran’s president, Hassan Rouhani, and the country’s supreme religious and political authority, Ayatollah Ali Khamenei.

Earlier in the day, the top U.S. diplomat offered a blunt assessment during an interview with CNBC.

“I think that some of it will end up in the hands of the IRGC [Revolutionary Guard] or of other entities, some of which are labeled terrorists to some degree,” Kerry said. “I’m not going to sit here and tell you that every component of that can be prevented. But I can tell you this: Right now, we are not seeing the early delivery of funds going to that kind of endeavor at this point in time. I’m sure at some point some of it will.”

He expanded on the remarks when questioned by reporters later, saying Washington will help Iran’s neighbors counter any such activity.

“We are plus-ing up their capacity, where there are holes or where they think there are things that are needed,” said Kerry, who will attend a weekend meeting of the Gulf Cooperation Council in Saudi Arabia, an arch foe of Iran. “We are confident this will not result in an increase somehow in the threat to any partner, any friend in the region.”

Kerry also said that he expects peace talks between the Syrian government and its opponents to start in Geneva next week as scheduled. But the initial encounters will probably be “proximity talks,” he said, involving different groupings in separate rooms while U.N. special envoy Staffan de Mistura shuttles among them.

“You’re not going to have a situation where people sit at a table staring at each other or shouting at each other,” Kerry said. “You’ve got to build some process here. That’s what will begin.”

Uncertainty has surrounded the talks, in part because of disagreements over which Syrian groups are considered legitimate opposition and which should be designated terrorist entities, meaning they will not be allowed to participate and will not be protected under a cease-fire.

Mohammed Alloush, who was named by a Saudi-backed Syrian opposition council to be chief negotiator on Wednesday, said the talks cannot begin unless blockades and attacks on civilians are halted.

Kerry characterized the concerns as “logistical” and said they will not prevent the talks from commencing.

“People are already there,” he said. “Some have arrived, have hotel reservations.”

He also said tensions between Sunni Saudi Arabia and Shiite Iran over Riyadh’s execution of a Shiite cleric will not prevent either country from supporting the Syria talks.

“They have both stated very clearly that this will not interfere with their willingness or ability to contribute constructively to this process,” he said.

Kerry has been coming to the World Economic Forum, a gathering of elites in government and business, since the 1980s. He said the casual setting is conducive to face-to-face diplomacy.

Abadi told reporters before a meeting with Kerry that he doubts Iran was involved in the disappearance of three U.S. contractors in Iraq this weekend and said he did not know whether they had been kidnapped. Kerry said that they had discussed the contractors and that, during a separate meeting with Zarif, he asked whether Iran could help locate the men.

Kerry said he and Netanyahu discussed Israel’s announcement that it will appropriate a large tract of land south of Jericho, near the Jordanian border, a locale where Israel has built settlements on land the Palestinians want for a future state.

“He tells me it is not a building that takes place. It is a, quote, ‘planning exercise,’ ” Kerry said. “I pointed out that the history of those has always turned into a building. And that we thought this was a concern, as it has been.”

Kerry said they also talked about ways to improve the lives of Palestinians and ensure Israeli security.