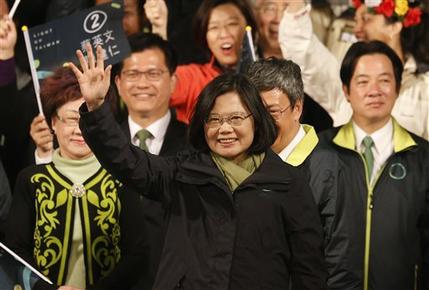 Taiwan’s Democratic Progressive Party, DPP, presidential candidate, Tsai Ing-wen, raises her hands as she declares victory in the presidential election Saturday, Jan. 16, 2016, in Taipei, Taiwan. (AP Photo/Wally Santana)
Share:
Taiwan should abandon its “hallucinations” about pushing for independence, as any moves towards it would be a “poison”, Chinese state-run media said after a landslide victory for the island’s independence-leaning opposition.

Tsai Ing-wen and her Democratic Progressive Party (DPP) won a convincing victory in both presidential and parliamentary elections on Saturday, in what could usher in a new round of instability with China, which claims self-ruled Taiwan as its own.

Tsai pledged to maintain peace with its giant neighbour China, while China’s Taiwan Affairs Office warned it would oppose any move towards independence and that Beijing was determined to defend the country’s sovereignty.

Reacting to Tsai’s victory, China’s government-controlled media used noticeably less shrill language than that levelled at Chen Shui-bian, the DPP’s last president, and noted her pledges for peace and to maintain the “status quo” with China.

But the official Xinhua news agency also warned any moves towards independence were like a “poison” that would cause Taiwan to perish.

“If there is no peace and stability in the Taiwan Strait, Taiwan’s new authority will find the sufferings of the people it wishes to resolve on the economy, livelihood and its youth will be as useless as looking for fish in a tree,” it said.

China called Chen, who led Taiwan from 2000-2008, a troublemaker and a saboteur of cross-strait ties, even as he tried to maintain stable relations with Beijing.

Warns of ‘crossing the red line’

The Global Times, an influential tabloid published by the ruling Communist Party’s official People’s Daily newspaper, said in an editorial that if Tsai’s administration sought to “cross the red line” like Chen, Taiwan would “meet a dead end”.

“We hope Tsai can lead the DPP out of the hallucinations of Taiwan independence, and contribute to the peaceful and common development between Taiwan and the mainland,” it added.

In Taiwan, the China-friendly China Times called on Tsai to be a “dove for cross strait peace”.

“Peace across the Taiwan Strait is the most important external factor for Taiwan’s stable development,” it said in an editorial.

Tsai won 56 percent of the vote to sweep aside rival Eric Chu of the China-friendly Nationalist Party that had ruled Taiwan under incumbent president Ma Ying-jeou since 2008.

Tsai’s DPP also made huge gains in the parliamentary polls to gain an absolute majority with 68 seats in the 113-seat legislature, giving her administration a far stronger policy-making lever over the next four years, and potentially more leverage over Beijing on cross-strait deals and affairs.

China’s Foreign Ministry, in its reaction to her victory, said Taiwan was an internal matter for China, there is only one China in the world and the island’s election neither changes this reality nor international acceptance of it.

“There is only one China in the world, the mainland and Taiwan both belong to one China and China’s sovereignty and territorial integrity will not brook being broken up,” the ministry added.

“The results of the Taiwan region election does not change this basic fact and the consensus of the international community.”

Tsai has been thrust into one of Asia’s toughest and most dangerous jobs, with China pointing hundreds of missiles at the island it claims, decades after the losing Nationalists fled from Mao Zedong’s Communists to Taiwan in the Chinese civil war in 1949.

The White House said on Saturday it congratulated Tsai and said the United States maintained a “profound interest” in peace between Taiwan and China.