Is Venezuela on the road to a failed state ? 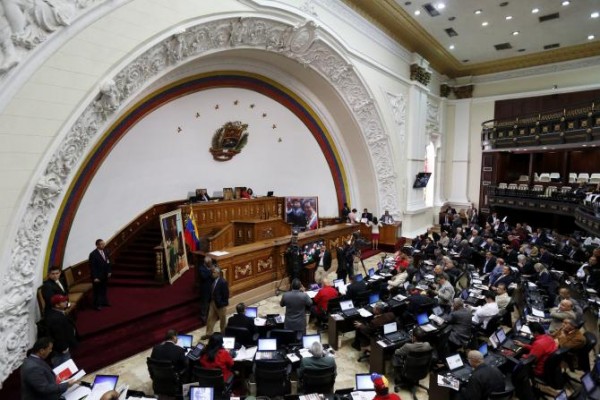 Venezuelan deputies during a National Assembly session in Caracas on January 6, 2016.
Share:
Venezuela’s Supreme Court ruled on Monday that the new National Assembly’s decisions are void unless three banned opposition lawmakers are removed from office, deepening a power struggle over the opposition’s new legislative majority.

Already beset by a deep economic crisis, Venezuela now seems to be sliding into a protracted period of political turmoil as both a newly-emboldened opposition and President Nicolas Maduro’s socialist government play hardball with each other.

The Supreme Court in December blocked four lawmakers – three opposition and one allied with the government – from taking office after the Socialist Party made allegations of irregularities during last month’s legislative election.

The opposition dubbed the ruling a bid to strip it of its super majority, and defiantly swore in the three barred opposition lawmakers anyway, one of a number of tussles between the newly convened congress and the court.

“Decisions taken or to be taken by the National Assembly while these citizens are incorporated will be absolutely null,” the court, which almost always rules in favor of the ruling Socialists, said in a statement on Monday.

The Socialists said congress was now effectively powerless unless the lawmakers, who hail from the southern jungle state of Amazonas, were removed.

“The logical, sane and democratic step is for the National Assembly’s leadership to revoke the swearing-in of these lawmakers,” said Socialist Party No. 2 and former National Assembly President Diosdado Cabello.

“If the National Assembly is in contempt, nobody is going to recognize it,” he said. The Supreme Court’s constitutional chamber had stepped in during similar situations in the past, he said.

The opposition said the measure was an authoritarian grab.

“The big loser is going to be Maduro because he’s going to create a constitutional crisis. He wants to immobilize the National Assembly, like Fujimori,” said Ramon Escovar, a lawyer advising the opposition bloc, referring to Peruvian President Alberto Fujimori’s dissolution of congress in 1992.

The opposition plan to introduce an amnesty law on Tuesday for jailed politicians and activists, while government lawmakers intend to push for a declaration of “national emergency” over the economic crisis.

The opposition also wants to sack Supreme Court justices sworn in by the then Socialist-led congress last month, which the opposition said would then allow for the ban on the three lawmakers to be lifted.

Many Venezuelans are fed up with the political bickering and want leaders on both sides to focus instead on fixing the recession, world’s highest inflation and shortages of basic products.