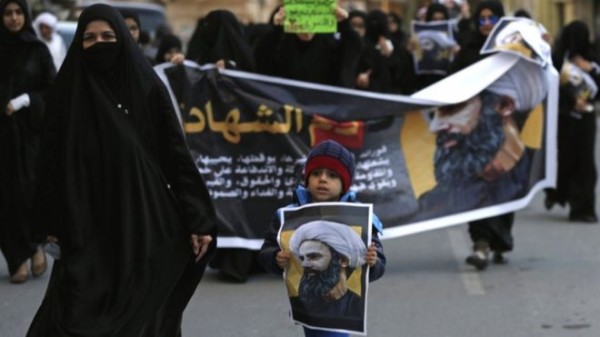 Bahrain on Sunday saw protests against the execution of Sheikh Nimr
Share:

Bahrain announced Monday that it was severing diplomatic ties with Iran, a day after its ally Saudi Arabia cut ties with the Islamic republic amid escalating tensions over the execution of a Shiite cleric.

“Bahrain decided to break off diplomatic relations with the Islamic Republic of Iran and calls upon all members of the mission to leave the kingdom within 48 hours,” Bahrain News Agency said.

Protests spread to Bahrain, a Sunni kingdom which has a Shiite majority population.

Nimr, a prominent opponent of the ruling Al Saud dynasty, was executed on Saturday along with three other Shiites and 43 members of al Qaeda.

Saudi authorities said they had asked their Iranian officials to ensure security at the embassy, but Tehran failed to protect it. In response, Riyadh cut ties with Iran, ordering diplomats, as well as consular and embassy staff representing Tehran, to leave the country within 48 hours.

Later Sunday, a Saudi Arabian man was killed in the home town of the executed Shiite cleric when gunmen opened fire on police, according to Saudi state media.

Tehran hit back on Monday, accusing Saudi Arabia of exploiting the embassy attack to fuel tensions in the region, adding that it was committed to protecting foreign diplomatic missions.

“Iran… is committed to provide diplomatic security based on international conventions. But Saudi Arabia, which thrives on tensions, has used this incident as an excuse to fuel the tensions,” Ministry Spokesman Hossein Jaberi Ansari said in televised remarks.

The 56-year-old cleric’s execution has fuelled long-simmering tensions between the Middle East rivals.

Relations between Sunni-ruled Saudi Arabia and Shiite-ruled Iran have been strained for decades, with Riyadh frequently accusing Tehran of interfering in Arab affairs.

The two countries have also been divided over the nearly five-year war in Syria, where Iran is backing the regime, and the conflict in Yemen where a Saudi-led coalition is battling Shiite rebels.

Nimr was a central figure in Arab Spring-inspired protests by Saudi Arabia’s Shiite minority until his arrest in 2012. He was convicted of terrorism charges but denied advocating violence.

“The unjustly spilt blood of this martyr will have quick consequences,” he said, adding, “It will haunt the politicians of this regime.”

Meanwhile, Iran’s President Hassan Rouhani condemned the execution as “inhuman”, but also urged the prosecution of “extremist individuals” for attacking the embassy and the Saudi consulate, state media reported.

In addition to Bahrain other nations joined the Saudis in diplomatic action against Iran
Sudan has expelled Iran’s ambassador and the UAE has downgraded its diplomatic team.

“In response to the barbaric attacks on the Saudi Arabian Embassy in Tehran and its consulate in Mashhad … the government of Sudan announces the immediate severing of ties with the Islamic Republic of Iran,” a Foreign Ministry statement said.

The United Arab Emirates said it will cut the number of Iranian diplomats in the country.