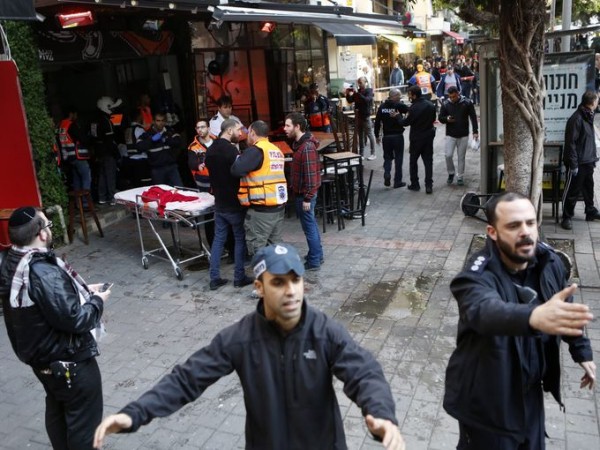 Tel-Aviv Cafe shooting on Jan 1, 2016
Share:
Two people were killed and at least seven wounded Friday when a gunman opened fire on a pub and nearby cafe in central Tel Aviv, but the motive was not immediately clear.

The shooting came amid a recent wave of Palestinian attacks on Israelis and days after the leader of the Islamic State (IS) group threatened the Jewish state with violence.

However, police stressed they were investigating in “all directions”.

Media reports identified the shooter as an Arab in his late twenties from northern Israel who had recently been jailed for trying to snatch a soldier’s weapon, but police refused to confirm.

Ayman Odeh, who heads the Joint List that groups the main Arab parties in parliament, said that “while not all the details of the incident are clear yet”, he “sharply and clearly” condemned any attack on innocent people.

CCTV footage from a nearby grocery store showed a bespectacled young man with a backpack calmly pretending to shop before going to the exit, placing the backpack on a trolley, removing what looks like a submachine gun and opening fire in the street.

A police spokeswoman refused to confirm or deny reports that a copy of the Koran was found in the assailant’s backpack.

Medics said they took nine people to hospitals in Tel Aviv, with police saying two of them had died.

One of those killed was identified by his father as Alon Bakal, a law and business student who was a manager at Simta, the pub targeted, with police naming the second as Shimon Ruimi from southern Israel.

An AFP reporter said patrons at the pub and a nearby cafe had been shot at, and that the sidewalk was strewn with chairs and broken glass as forensic officers examined the scene.

Witnesses said people had braved the chilly weather to sit outside on terraces at both venues, located on Dizengoff Street, a central thoroughfare of bars, cafes and shops.

Hundreds of police were scouring the area, entering buildings in the vicinity as police helicopters buzzed overhead.

‘I would have been dead’

Haim Pinto was closing his jewellery store near the pub when the shooting began.

“People started running in my direction, yelling ‘terrorist, terrorist’. I saw the commotion and went right back into my store, another girl came in and we hid in the bathroom till the shooting ended,” he told AFP.

Pinto said the pub had opened “just a few months ago”.

Osnat David, who owns a hair salon near the pub, said she was outside smoking a cigarette just two minutes before the attack began.

“If I were there when it happened I would have been dead,” she told AFP, recounting how she hid in her salon’s storage room with a few customers, clutching a pair of scissors and waiting for the shooting to end.

French tourist Alexandre Lambez was at a cafe across the street from the one targeted.

“I heard gunshots and turned around; I saw people rushing to the back of the cafe. I heard screaming and saw a man shooting. He was brown haired, wearing a grey sweater and fled the scene,” he told AFP.

“I immediately thought of the attacks in Paris,” he said, referring to jihadist attacks in November that killed 130 people at bars, a concert hall and the Stade de France stadium.

In a recording released Saturday, IS leader Abu Bakr al-Baghdadi is apparently heard pledging to attack Israel, saying his group has “not forgotten Palestine for a single moment”.

Rockets fired by Palestinians in the Gaza Strip, meanwhile, hit southern Israel Friday without causing any casualties or damage, the army said.

Sunni militants claiming links to IS have said they were behind similar rocket fire in recent months, but Israel holds the Palestinian Islamist group Hamas responsible for all such incidents.

Twenty Israelis, an American and an Eritrean have been killed in a wave of Palestinian attacks since October 1 including stabbings, car-rammings and gunfire targeting security forces and civilians.

According to an AFP count, 138 Palestinians have been killed by Israeli forces since the start of the latest violence, most while carrying out attacks on Israelis.

Earlier on Friday, Israel handed over to their families the bodies of 23 Palestinians killed during recent attacks on Israelis, in an apparent bid to ease tensions.