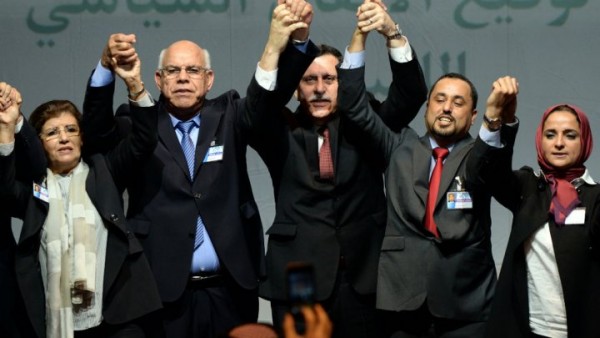 Members of Libya’s General National Congress (GNC) and the Tobruk-based House of Representatives celebrate after signing a unity government deal on December 17, 2015, in the Moroccan city of Skhirat.
Share:
The UN Security Council on Wednesday endorsed a UN-brokered agreement among Libya’s warring factions to form a national unity government, a deal Western powers hope will bring stability and help combat a growing Islamic State (IS) group presence.

The unanimously adopted resolution, drafted by the UK, made clear that Libya’s future unity government should be the sole representative for the North African country, where competing governments have long vied for power.

The 15-nation body gave its support to the deal signed last week in the Moroccan town of Skhirat between representatives of strife-torn Libya’s two competing regimes.

Britain’s ambassador to the United Nations, Matthew Rycroft, presented the motion and dubbed it “a strong collective sign of our commitment to Libya’s sovereignty, territorial integrity and national unity”.

But he warned, “it is only the start of a process.”

Four years after Muammar Gaddafi’s fall, Libya is deeply fractured with two rival governments—a self-declared one in Tripoli and an internationally recognised one in the east—each backed by coalitions of former rebels and militias.

On December 17, under UN guidance, envoys from both sides and a number of independent political figures signed a deal to unify the government.

Around 80 of 188 lawmakers from Libya’s internationally recognised parliament and 50 of 136 members of the rival Tripoli-based General National Congress signed the deal.

It calls for a 17-member government, headed by businessman Fayez el-Sarraj as premier, based in the Libyan capital.

A presidential council would also serve for a transitional period of two years until legislative elections.

The United Nations envoy to Libya, Martin Kobler, is now working on arrangements to allow the unity government to safely set up shop in Tripoli, which is under the control of militia fighters.

“It is now very important that the government moves into Tripoli as soon as possible,” he told reporters at the UN after the vote.

Western officials believe war fatigue, promises of foreign aid, the strain on Libya’s oil economy and the common threat of the IS group will help build momentum to implement the agreement in the fractured nation awash with armed militia groups.

Since the 2011 revolution ousted Gaddafi, Libya has struggled with almost constant instability as heavily armed brigades of former rebels and their political allies squabbled for control.

Battered by protests and attacks, oil production that accounts for most government revenue is now less than half of the 1.6 million barrels per day level prior to 2011.

But last year, fighting intensified when one armed faction took over Tripoli, set up its own government and reinstated the old parliament, the General National Congress. Since then, the recognised government and elected House of Representatives have been operating out of the east of the country.

In the chaos, IS militants have steadily expanded their presence, taking over the city of Sirte, attacking a hotel and a prison in Tripoli, ransacking oilfields to the south of Sirte and executing a group of Egyptian Christians.

Libyan UN ambassador Ibrahim Dabbashi said on Wednesday Libya will hold off asking nations like the US and the UK to intervene with air strikes against the IS.

Dabbashi told AP he would rather see a UN arms embargo loosened so Libya can defend itself against IS instead.

UN envoy Kobler said that the one thing Libya’s various parties, and its neighbours, have been able to agree on is the need to counter the IS. He said the national unity government will have to organise that fight, and “later on, the question arises of whether they’re going to do it alone”.

Kobler said Libya’s future army will need weapons, but the new government must be in place to ask the Security Council for exemptions to the arms embargo.

Some countries appear eager to help tackle the IS. Italy has offered to lead an international peacekeeping mission in Libya, if the new national unity government requests it.

Dabbashi said any such request will be left to the new government.

“No one can predict that we will ask for that at any time,” the ambassador said. “This is kind of a transitional period.”