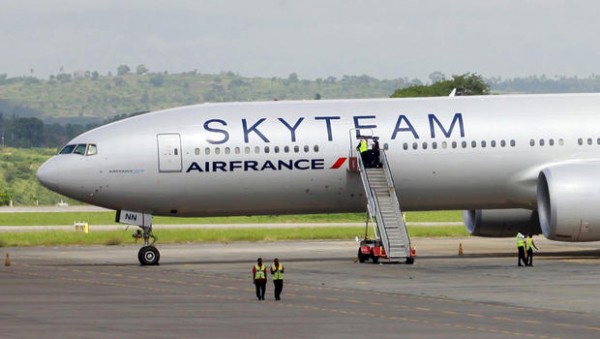 Airport workers are seen near the Air France Boeing 777 aircraft that made an emergency landing is pictured at Moi International Airport in Kenya’s coastal city of Mombasa, December 20, 2015. REUTERS/JOSEPH OKANGA
Share:
Kenyan authorities are questioning several suspects who were on an Air France flight from Mauritius to Paris that was forced to land early Sunday in the Kenyan coastal city of Mombasa after a device suspected to be a bomb was found in a lavatory.

The CEO of Air France said hours after the plane had been grounded that the device discovered in the bathroom was a fake bomb.

The Boeing 777 was heading to Charles de Gaulle airport in Paris from Mauritius when its pilots requested an emergency landing at early Sunday in the Kenyan city of Mombasa.

Frederic Gagey, the head of the airline, said the device was made of cardboard, paper and a household timer, and had been found in a little cupboard that is behind a mirror.

In a news conference in Paris, Gagey congratulated the crew for their cool-headed reaction to divert the plane.

He insisted “this object did not contain explosives.”

Gagey said a safety check was carried out in the bathroom before the flight, which means the device was likely placed there once the plane was in the air. He said passengers are checked, and sometimes double-checked on flights, and denied any security failure in the flight Sunday. Regardless more security will be implemented in the Mauritius islands — a popular tourist destination for French citizens — from now on.

A few passengers are being questioned, said Kenya’s Interior Minister Joseph Nkaissery, speaking at a press conference at the Mombasa airport.

A Kenyan police official said six passengers are being questioned. The police official, who insisted on anonymity because he is not authorized to speak to the media, said during the flight a passenger noticed something in a lavatory that looked like “a stopwatch mounted on a box.”

The passenger reported the device to the cabin crew, who informed the pilots, leading to an emergency landing at the airport in the Kenyan city of Mombasa. The official said one of those being interrogated is the man who reported the package.

The Boeing 777 Air France flight 463 was heading to Charles de Gaulle airport in Paris when the pilots requested an emergency landing at the Moi International Airport at 12:37 a.m., police spokesman Charles Owino said.

“It requested an emergency landing when a device suspected to be an explosive was discovered in the lavatory,” Owino said.

The plane was carrying 459 passengers and 14 crew members on board and had left Mauritius at 9 p.m., Owino said

All passengers were safely evacuated and the device was taken out, said Owino.

Scheduled flights to Mombasa were disrupted during the interval but normal operations have resumed.

A passenger who spoke to journalists after leaving the plane in Mombasa described the emergency landing.

“The personnel of Air France was just great, they were just wonderful. So they keep everybody calm. We did not know what was happening,” said Lucchini. “So we secured the seat belt to land in Mombasa because we thought it was a technical problem but actually it was not a technical problem. It was something in the toilet. Something wrong in the toilet, it could be a bomb.”

France has been under a state of emergency since the Nov. 13 attacks in Paris that left 130 people dead. The Islamic State group has claimed responsibility for that and the Oct. 31 crash of a Russian passenger in the Sinai desert that killed all 224 people aboard. Moscow has said that the crash was caused by a bomb on the plane.

Two Air France flights from the U.S. to Paris were diverted on Nov. 18 after bomb threats were received. No bombs were found on the planes from Los Angeles and Washington, D.C.

Kenya itself has also dealt with a host of terrorist attacks and threats, mostly from al Shabaab, the extremist group based in neighboring Somalia.