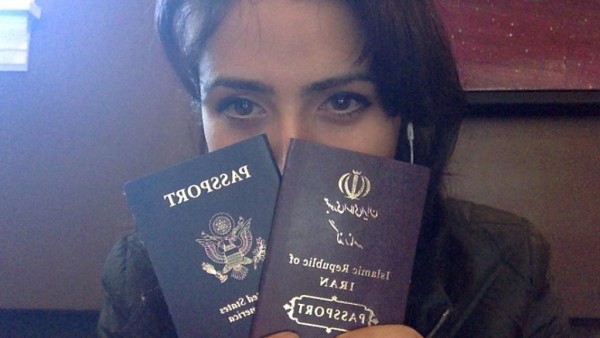 A dual Iranian and American citizen poses with her two passports
Share:
Iranian citizens who have ties to the United States are anxious about a new bill that would no longer allow them to be part of the visa waiver programme. If the bill passes, they would have to ask for visas – which may be hard to obtain – to travel to the United States.

As of today, citizens of 38 countries are allowed to visit the United States for up to 90 days without a visa. But last week, Congress voted to exclude anyone who holds a passport from Iran, Syria, Iraq, and Sudan, as well as any foreign nationals who have visited any of these countries in the past five years. This means, for example, that a French citizen who visited Iran a few years ago would have to apply for a visa to visit the United States.

Congress passed the bill just days after the San Bernardino terrorist attacks, and a few weeks after the Paris attacks. The initial bill focused on just Syria and Iraq, designated as “terrorist hotspots”, but Iran and Sudan were added later. The bill must still be passed by the Senate.

Iranian-Americans have vocally opposed the bill, pointing out that not a single terrorist attack in the United States has been perpetrated by an Iranian national, and that Iranian forces are currently fighting against the Islamic State organisation in Iraq and Syria.

Many Iranian-Americans have protested on social media, by posting photos of themselves holding their two passports or by sharing photos showing what they do when they visit Iran (hint: it has nothing to do with training to become terrorists.)

They’ve also massively signed several petitions, including one by the National Iranian American Council and another that has been submitted to the White House website.

Europeans are none too happy either – 29 ambassadors from European countries to the United States have criticised it in a statement, saying it would negatively affect European businessmen, journalists, humanitarian workers and medical staff who travel both to Iran and the United States, “while doing little to detect those who travel by more clandestine means overland”.

France 24 talked to several people who would be affected by the bill. Here’s what they had to say…

“It’s not that different from what Donald Trump has suggested”

Ali Abdi is an Iranian human rights activist. He lives in the United States, where he attends Yale University.

In the aftermath of shootings in California and earlier ones in Paris, many governments in the West have taken measures to close borders and to halt immigration in order to make their countries, as they claim, more secure and safe. But I do not think those measures, and specifically this particular bill, meet the stated goals. I find it appalling to target ordinary and innocent people. I think it is nothing short of racism to put millions of people in the Middle East and Africa – specifically from these four countries – into the category of “terrorists” and look at us as potential threats just because of where we are born or where our fathers were born.

A few days ago, the leading Republican candidate in the US, Donald Trump, called for a total shutdown of Muslims from entering the country. And I think what the House of Representatives passed – specifically this bill, HR158 – is not that different from what Mr. Trump has suggested. I think this is un-American and unconstitutional to produce second-class citizens or to produce laws which have such discriminatory consequences.

If many of the states that are members of the US visa waiver program reciprocate, then people like me would not be able to leave the US, for example to go to Europe or to Japan or to Australia, without acquiring a visa, unlike American citizens. This is indeed upsetting.

“I’m French, but because I also have an Iranian passport, I would have to apply for a visa to the US”

Nilufar Khalessi is a dual Iranian and French citizen. She was born in France and lives in Paris, where she works as a fashion journalist.

Imagine you’re Iranian and you’re French, like me, and imagine you haven’t been to Iran for ten or 15 or 20 years, or you’ve never been to Iran at all! Well, if you want to go to the United States, because you have an Iranian passport, you can only go if you get a visa, which is really unfair, because I can’t just go like any other French person. Everyone knows how hard it is to get a visa to get into the United States. And when someone hasn’t been to Iran in decades or has never even been at all, I don’t even get the point of them saying you’re maybe dangerous!

Now imagine you just have French nationality, but you have an Iranian name. If they ask you your origin at the airport on arrival in the United States, will you get blocked?

They’re comparing Iran to Sudan, Iraq, and Syria, which I really don’t get the point of. I don’t see the same danger between these four countries. Iran just recently signed an agreement with the United States last summer… I don’t understand how the US wants to do business, and at the same time, they’re blocking Iranian business people!

It’s discrimination, because they’re not judging you by what you did in Iran, or even if you’ve ever been in Iran – they’ll just say you’re Iranian, so you can’t come.

Iranian authorities did not take the news very well. Its deputy foreign minister said Iran was reviewing the legislation, and that it would “take action” if it was deemed to break the terms of the recently-signed nuclear deal, which stipulated that there would be no new sanctions against Iran.