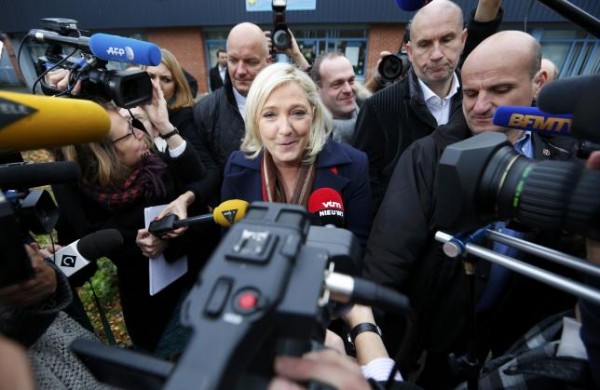 Marine Le Pen, French National Front political party leader and candidate for the National Front in the Nord-Pas-de-Calais-Picardie region, speaks to journalists as she leaves the polling station after casting her ballot in the second-round regional elections in Henin-Beaumont, France, December 13, 2015. REUTERS/Yves Herman
Share:

Marine Le Pen’s far-right National Front did not win any region in French elections on Sunday, in a setback to her hopes of being a serious presidential contender in 2017.

The regional election run-off, in which the conservatives won seven constituencies and the Socialists five, was no real victory for either of these two mainstream parties, shaken by the far-right’s growing appeal to disillusioned voters.

Boosted by fears about security and immigration after the Islamist militant attacks in Paris a month ago that killed 130 people, the National Front (FN) had won more votes than any other party nationally in last week’s first round.

Although it won no region on Sunday after the Socialists pulled out of its key target regions and urged their supporters to back the conservatives of former President Nicolas Sarkozy, the FN still recorded its best showing in its history.

“Tonight, there is no place for relief or triumphalism,” Socialist Prime Minister Manuel Valls said. “The danger posed by the far right has not gone away; far from it.”

Sarkozy struck a similar theme, calling the strong FN showing a “warning sent to all politicians, ourselves included, in the first round”.

“We now have to take the time for in-depth debates about what worries the French, who expect strong and precise answers,” he said, citing Europe, unemployment, security and national identity issues.

Le Pen, who had hoped to use regional power as a springboard to boost her chances in 2017 presidential elections, lost by a huge margin in northern France on Sunday, where she led her party’s ticket, attracting 42.8 percent of the votes in the run-off vs 57.2 percent for the conservatives.

Long content with attracting protest votes, the FN has changed strategy since Le Pen took the party over from her father Jean-Marie in 2011, seeking to build a base of locally elected officials to target the top levels of power.

But while it has been winning more and more votes in each election since then, its isolation in France’s politics means it cannot strike the alliances it would need to win major constituencies. So it failed once more on Sunday to turn growing popularity into power.

In the southeast, another FN target where Le Pen’s niece Marion Marechal-Le Pen was the FN’s lead candidate, the conservatives scored 53.7 percent and the FN 46.2 percent, official results based on 84 percent of the votes said.

“There are victories that shame the winners,” Marechal-Le Pen said, slamming the Socialists’ decision to pull out of the race for the run-off.

Aside from immigration concerns, which have been boosting nationalistic parties in other European countries too, the FN’s rise has been built on deep disaffection with mainstream politics among French voters and a frustration with President Francois Hollande’s inability to reduce unemployment.

With five regional wins out of 13, the Socialists did less badly than they had feared but it was still a huge defeat. Regional boundaries were redrawn after the 2010 election, in which the Socialists had won 21 out of 22 regions.

Sarkozy, weakened by his party’s poor showing in the first round, said the National Front’s high score should be a warning to all mainstream politicians.

Among those in his party elected thanks to left-wing voters and a much higher turnout in the run-offs, there was no triumphalism.

“I thank the voters for protecting our beautiful region,” said Xavier Bertrand, the Republicans’ main candidate in Nord-Pas de Calais-Picardie. “I also want to thank the voters of the Left who clearly voted to create a rampart” against the FN.

The regional election, the last one before the 2017 presidential and parliamentary ballots, was seen as a test for its main contenders, Hollande, Sarkozy and Le Pen.

“But if no answers are made to the French people’s concerns, the National Front will continue its rise until the presidential election,” it said in a front-page headlined: “Defeat for all.”
Reuters