World climate accord hailed as turning point from fossil fuels 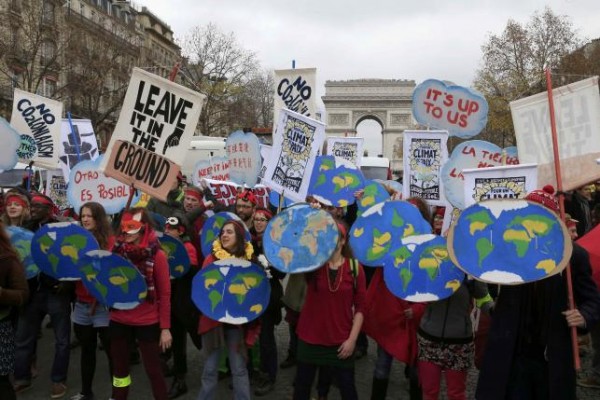 French Foreign Minister Laurent Fabius presented a landmark global climate accord on Saturday, a “historic” measure for transforming the world’s fossil fuel-driven economy within decades and turning the tide on global warming.

At the tail end of the hottest year on record and after four years of fraught U.N. talks often pitting the interests of rich nations against poor, imperiled island states against rising economic powerhouses, Fabius urged officials from nearly 200 nations to support what he hopes will be a final draft.

Setting a broad goal of eliminating the net increase in man-made greenhouse gas emission this century, the agreement does not mandate specific measures or targets. Instead, it creates a system for ensuring countries make good on voluntary domestic efforts to curb emissions, and provides billions more dollars to help poor nations cope with the transition to a greener economy.

“Our responsibility to history is immense,” Fabius told thousands of officials, including President Francois Hollande and U.S. Secretary of State John Kerry, in the main hall of the conference venue on the outskirts of Paris.

“If we were to fail, how could we rebuild this hope?” he asked. “Our children would not understand or forgive us.”

Barring any last-minute objections as negotiators pore over the final text, they will reconvene at around 1545 local time (9.45 a.m. EST) to approve the agreement, a major breakthrough in global efforts to avert the potentially disastrous consequences of an overheated planet.

Calling it an “ambitious and balanced” agreement, Fabius said it would mark a “historic turning point” for the world.

Prior to the session, China’s top negotiator Gao Feng said there “there is hope today” for a final pact, while Marshall Islands Foreign Minister Tony De Brum told Reuters: “I think we’re done here.” Leaving the midday session, Secretary Kerry said an agreement seemed to be “teed up”.

A deal, if finalised, would be a powerful symbol to world citizens and a potent signal to investors – for the first time in over two decades, both rich and poor nations will agree to a common vision for curbing greenhouse gas emissions, and a roadmap for ending two centuries of fossil fuel dominance.

From the outset, critics have said the emerging deal had serious weaknesses, most prominently the fact that envisaged emissions cuts will not be enough to keep warming to less than 2 degrees Celsius (3.6 Fahrenheit) over pre-industrial times, the level scientists say is needed to avert the worst effects of warming including severe droughts and rising sea levels.

Unlike the Kyoto Protocol, the last major climate deal agreed in 1997, the Paris pact will also not be a fully legally binding treaty, something that would almost certainly fail to pass the U.S. Congress. Instead, it will be largely up to each nation to pursue greener growth in its own way, making good on detailed pledges submitted ahead of the two-week summit.

And in the United States, many Republicans will see the pact as a dangerous endeavor that threatens to trade economic prosperity for an uncertain if greener future.

Still, by charting a common course, officials hope executives and investors will be more willing to spend trillions of dollars to replace coal-fired power with solar panels and windmills.

“It will be up to business, consumers, citizens and particularly investors to finish the job,” said Hans Joachim Schellnhuber, director of the Potsdam Institute for Climate Impact Research.

A deal in Paris would mark a legacy-defining achievement for U.S. President Barack Obama, who has warned not to “condemn our children to a planet beyond their capacity to repair”.

After talks that extended into early morning, the draft text showed how officials had resolved the stickiest points. Hollande cautioned that the pact would not be “perfect for everyone”, urging delegates to see the common need while reviewing key compromises that are certain to leave some nations unsatisfied.

“Faced with climate change our destinies are bound together,” he said.

In a win for a broad coalition of “ambitious” nations, the agreement would set a tougher goal for limiting the rise in global temperatures to “well below” 2 degrees Celsius.

Nations would have to reach a peak in greenhouse emissions “as soon as possible” and achieve a balance between output of manmade greenhouse gases and absorption – by forests or the oceans – “by the second half of this century”.

“If agreed and implemented, this means bringing down greenhouse-gas emissions to net zero within a few decades. It is in line with the scientific evidence we presented,” said John Schellnhuber, Director of the Potsdam Institute for Climate Impact Research.

It also requires rich nations to maintain a $100 billion a year funding pledge beyond 2020, and use that figure as a “floor” for further support agreed by 2025, providing greater financial security to developing nations as they wean themselves away from coal-fired power.

And most countries would review their domestic pledges for tackling greenhouse gas emissions every five years, though it makes an exception for those who have already committed to measures out to 2030, resolving a disagreement with China.

NOT ENOUGH, OR TOO MUCH?

While some climate change activists and U.S. Republicans will likely find fault with the accord – either for failing to take sufficiently drastic action, or for overreacting to an uncertain threat – many of the estimated 40,000 officials and environmentalists who set up camp on the outskirts of Paris say they see it as a long overdue turning point.

Six years after the previous climate summit in Copenhagen ended in failure and acrimony, the Paris pact appears to have rebuilt much of the trust required for a concerted global effort to combat climate change, delegates say.

Leaders of vulnerable low-lying countries – who brought together more than 100 nations in a “high ambition coalition” at the talks, striving for the strongest possible language – have portrayed the Paris talks as the last chance to avoid the catastrophic consequences of rising temperatures.

Without joining together for immediate action, they had warned, greenhouse gas emissions would be certain to push the planet’s ecosystem beyond the 2C tipping point. They appeared to have carried the day, as Fabius said the text would seek to keep the rise to “well below” 2 degrees Celsius and if possible to limit global warming to 1.5 degrees.

While scientists say national pledges thus far are still too little to prevent that happening, the agreement should set out a roadmap for steadily increasing or “ratcheting up” those measures in order to head off calamity.

President Xi Jinping has promised that carbon dioxide emissions from China’s rapidly developing economy will start falling from around 2030, and does not want to revisit the target.
Reuters