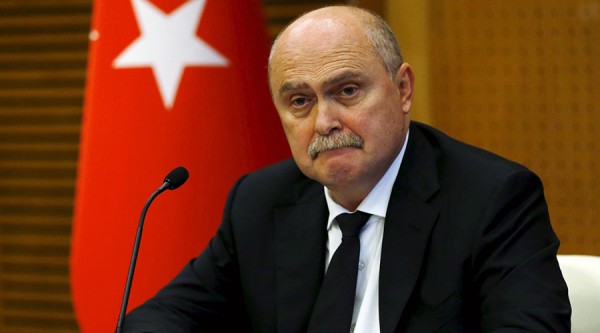 Former Turkish Foreign Minister Feridun Sinirlioglu
Share:
Two top Turkish officials traveled to Baghdad Thursday in a bid to defuse a diplomatic standoff with the Iraqi government over the deployment of Turkish troops in northern Iraq. Ankara has called for dialogue with Baghdad, but insists on the need for the military deployment.

Turkey’s top diplomat, Feridun Sinirlioglu, and the head of Turkish intelligence, Hakan Fidan, were dispatched to Baghdad as bilateral tensions continue to rise.

The Iraqi government is demanding the immediate withdrawal of Turkish forces deployed last week. But Turkish Prime Minister Ahmet Davutoglu reaffirmed on Thursday that there will be no withdrawal, saying the troops are needed to protect Turkish soldiers training Iraqis to fight the Islamic State.

Aydin Selcen, Turkey’s former consul general in the Iraqi Kurdistan city of Irbil, said the military deployment is more about sending a political message to allies and rivals.

“Now it turns into a permanent base, so it has a political message. A political message for Baghdad, for Tehran, for Moscow, for Washington. We have the capacity to move along our own interests alone,” Selcen said.

But Ankara is facing growing international pressure. The Arab League has criticized the move, while Washington has said any military deployment to Iraq has to have Baghdad’s consent.

On Wednesday, Ankara issued a travel advisory not to travel to Iraq. Cengiz Aktar, a political scientist at Istanbul’s Suleyman Sah University, said Ankara could end up paying a very heavy price for the deployment.

“The Baghdad authorities, who had lukewarm relations with Ankara, rejected this fait accompli, because they consider this as an act of aggression. Turkey also received a warning from Iran; Iran rejected the Turkish move. The big question today is how Ankara will manage to cope with all these accumulated crises,” Aktar said.

The row with Baghdad comes as Ankara is embroiled in a diplomatic crisis with Moscow over its downing of a Russian fighter on the Syrian-Turkish border. The two disputes could merge if Baghdad carries out its threat to take the issue to the United Nation’s Security Council. Retired Turkish diplomat Selcen said Ankara needs to recalibrate its foreign policy.

“Ankara is taking more and more bold moves, unconventional steps. Within this combustible environment, these are highly risky moves. There are too many… different moving parts for Ankara to juggle,” Selcen said.

Observers say there is little indication that Turkey is changing its policy, with Ankara insisting it needs to play an active role to protect its interests in a region that remains in turmoil.