Russia’s Putin is dangerous, has no interest in stabilizing the Middle East, says Kasparov 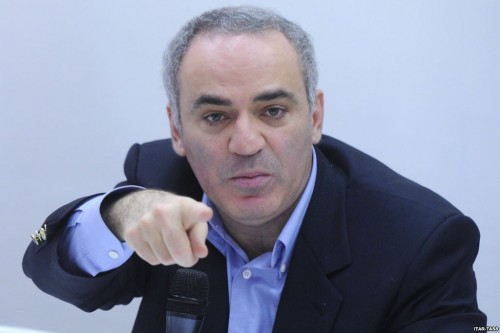 When Turkey blasted a Russian fighter jet out of the sky on Nov. 24, it was the first time a NATO country had shot down a Russian aircraft since the Korean War, more than 60 years ago.

Close encounters between Russia and NATO are not uncommon. They’ve been escalating, according to figures from the European Leadership Network, a U.K.-based think tank. The group compiled a list of what it calls “close military encounters” between Russia and the West, from January 2014 to March 2015. Over that time, the group recorded 67 incidents, including airspace violations, close encounters at sea and other dangerous actions all over the world.

The pilot of the Russian jet died when the aircraft was shot down, and another Russian service member was killed trying to rescue the navigator, who survived. Russia responded quickly by moving its most advanced missile defence system into northern Syria, imposing economic sanctions, and cutting off all military communication with Turkey.

The incident with Turkey was the culmination of a number of similar airspace violations by Russia recently. Evidence that Vladimir Putin is becoming more aggressive has been mounting for some time.

Former chess grand master Garry Kasparov quit the game in 2005 to become a political activist, in response to Putin’s move to roll back democratic reform – and increasing hostility to political dissent of any kind. Kasparov’s plan to run for president ended in 2007 under government pressure.

“Putin never participated in a single debate in his life,” Kasparov said in an interview with 16×9. “The only debates in Russia are between protesters and riot police.”

Kasparov fled to New York in 2013, when it became clear he was being watched very closely by the Russian government.

Putin invaded Georgia in 2008. His illegal annexation of Ukraine’s Crimean peninsula in 2014 was the first action of its kind since former Iraqi president Saddam Hussein invaded Kuwait in 1991. Ukraine’s conflict with Russian separatists has since expanded with Moscow’s support.

And Russia’s bombing campaign in Syria is viewed with suspicion. Putin says his forces are there to bomb the so-called Islamic State group, but critics believe his main interest is causing chaos and maintaining Russian influence in the region.

“Those who expect Putin as an ally in the fight against terror, they’re wrong because Putin has no interest in stabilizing the Middle East,” says Kasparov. “He will provoke conflicts and wars wherever he can.”

“What I think he wants … is destabilized states close to him that he can draw into his orbit and make part of a new sort of Russian empire.”

The West has imposed sanctions on Russia over its military conquests, but it has continued attempts to engage Putin in negotiations. Kasparov says it’s clear that policy has failed, and draws on his experience as a master chess player for guidance:

“We have to make sure we play chess, not poker. Chess is a 100 per cent transparent game. You know exactly your resources and the resources of the opposition. Poker is a game of psychology. You can win with a very weak hand if you know how to bluff, and he is a KGB guy, he knows how to bluff.”

With tensions continuing to rise, no less an authority than former Soviet leader Mikhail Gorbachev has warned the world is “on the brink” of a new Cold War.

NATO now appears to be taking the Russian threat seriously. Member countries have tripled the number of troops available for NATO missions to 40,000 soldiers, including a 5,000-soldier contingent that can be deployed within 48 hours.

NATO has also opened new headquarters in six Eastern European countries. Those include Estonia, Latvia and Lithuania where Russia has been building up its military forces just over the border.

Kasparov believes the west has to be ready for war.

“Putin may one day cross NATO borders in Estonia or Latvia,” he says. “This winter, this geopolitical political winter, could be very long and be very costly.”