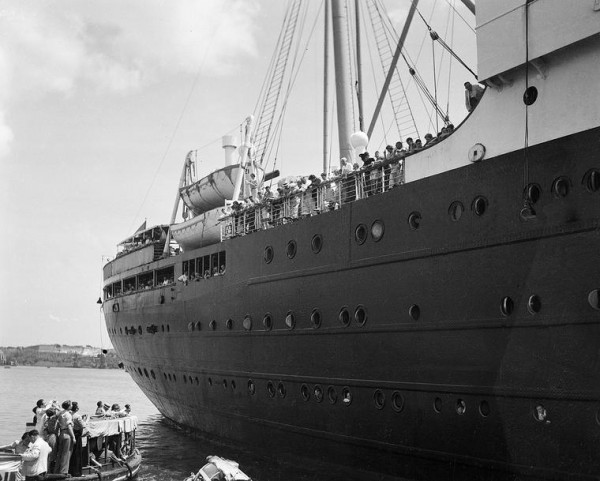 FILE – In this file photo of June 1, 1939, the German liner St. Louis is denied entrance to the Havana, Cuba harbor. The ship, carrying 917 German Jewish refugees, was later denied entrance to the United States and returned to Hamburg, Germany. A new book disputes widely held assumptions that President Franklin D. Roosevelt was insensitive to the plight of European Jews under the Nazis, and instead concludes that he tried to arrange resettlement for thousands of refugees in the late 1930s, only to be thwarted by his own State Department. (AP Photo, file)
Share:

The resistance to allowing Syrian refugees into the United States in light of the terrorist attacks in Paris echoes the concerns expressed by many Americans about accepting Jewish refugees before and during World War II.

Polls taken in 1938 and 1939 found that the majority of citizens did not want the government to allow refugees from Europe to settle in the United States. Multiple polls from the time period were tweeted Monday by an account called Historical Opinion, which shares historical polls and surveys.

One of the polls, published in Fortune magazine in July 1938, asked participants, “What is your attitude toward allowing German, Austrian and other political refugees to come to the U.S.?”

More than half of those polled, 67.4%, chose the response, “With the conditions as they are, we should try to keep them out.” About 23% said the country should accept refugees, but many of those said they would only agree if it would not raise the immigration quota.

US Jul ’38: What’s your attitude towards allowing German, Austrian & other political refugees to come into the US? pic.twitter.com/7hMfLbXWFE

Conducted by the American Institute of Public Opinion (which later became Gallup), the survey was conducted after Kristallnacht, or the “Night of Broken Glass,” a violent attack on Jews in Germany.

Polling methodology at the time was less exact than it is today, but anti-Semitism was prevalent during the run-up to World War II, historians say, and contributed to the hesitation about accepting Jewish refugees.

Also in 1939, the SS St Louis, a ship carrying over 900 Jewish refugees, arrived on the coast of Florida after being rejected by Cuban officials. The United States also refused to let it dock, and the captain was forced to take the ship back to Europe, where Belgium, France, Holland and the United Kingdom took in the refugees.
During the war, many Americans expressed concern that refugees could be secretly associated with the Nazis.

“Once the United States entered World War II, the State Department practiced stricter immigration policies out of fear that refugees could be blackmailed into working as agents for Germany,” the United State Holocaust Memorial Museum website says.

A column in the Saturday Evening Post in March 1941 expressed that view as well, warning that “disguised as refugees, Nazi agents have penetrated all over the world, as spies, fifth columnists, propagandists or secret commercial agents.”

Such fears have been echoed by a number of elected officials since the terrorist attacks in Paris on Friday. Many Republicans and some Democrats have said the U.S. should not accept Syrian refugees for fear that ISIS affiliates could enter the country hidden among the migrants.

A Reuters/Ipsos poll released Monday found 52% of Americans believe countries where Syrian refugees are accepted are less safe. Forty percent said those countries should continue to accept refugees, while 41% said they should stop accepting them. The poll did not ask specifically about the United States.

The State Department has said it will move forward with the plan to accept 10,000 Syrian refugees in the next year.

Before the Paris attacks, a Pew Research Poll found that 51% of Americans approved of the government’s decision to increase the number of refugees accepted into the country.

Many of those who support continuing the refugee program argue that those leaving Syria are fleeing terrorism themselves.

But, history shows, it may be a while before the public fully supports an influx of refugees. During World War II, the United States only took concrete steps to help Jewish refugees after Americans became fully aware of the genocide taking place in Europe. Near the end of the war, in 1944, President Franklin D. Roosevelt set up the War Refugee Board to help Jews escape to the United States.
MSNBC