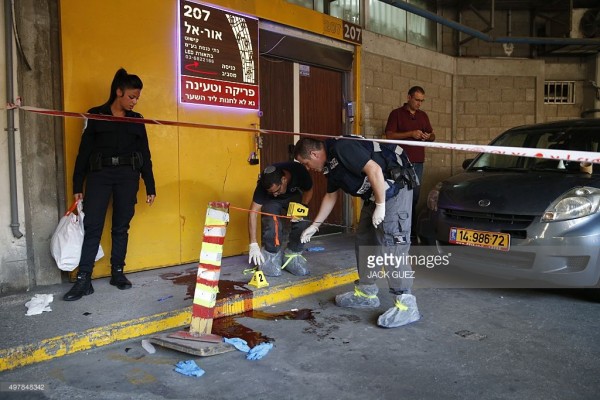 A knife-wielding Palestinian fatally stabbed two Israeli men and wounded a third Israeli in a Tel Aviv office building on Thursday before being apprehended, police and witnesses said.

The attack was the latest in a two month outburst of assaults that Israel has struggled to contain. Much of the Israeli-Palestinian violence has been focused on the flashpoint West Bank city of Hebron, but Thursday’s attack in the economic hub of Tel Aviv returned the unrest to the Israeli heartland.

According to police, the attack took place in southern Tel Aviv, in a shop on the second floor of an office building where a group of Israelis had gathered to hold afternoon prayers.

Police spokeswoman Luba Samri said one of the dead was in his 20s. Details about the second fatality’s identity were not immediately known, but he died of his wounds in hospital, she said.

Samri said the attacker was apprehended by civilians. She said he was a 24-year-old Palestinian from the West Bank village of Dura. It was not immediately clear what he was doing in Tel Aviv.

Shimon Vaknin, a witness, told Israeli Channel 2 TV, that a bloodied man stumbled into the room where he prayed with companions in Tel Aviv. He described a dramatic standoff with the worshippers standing against the closed shop door as the assailant tried to force his way in.

“We were in the middle of prayers … a man fell upon us covered in blood, all cut up,” Vaknin said.

Tel Aviv and its surrounding suburbs have seen a number of attacks during the latest wave of violence.

But much of the recent violence has been focused around Hebron. Near the city last week, two Israelis, a father and son, were killed on their way to a dinner.

Thursday’s attack brings the number of Israelis killed in the wave of violence to 16. At least 82 Palestinians have been killed by Israeli fire, 52 of them said by Israel to be attackers, the remainder killed in clashes with Israeli troops.

The violence erupted in mid-September over tensions surrounding a Jerusalem holy site and quickly spread deeper into Israel, the West Bank and the Gaza Strip.