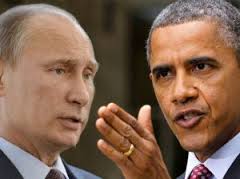 U.S. President Barack Obama vowed on Sunday to step up efforts to eliminate Islamic State and prevent more attacks like those in Paris, while urging Russia’s Vladimir Putin to focus on combating the jihadist group in Syria.

A White House official said Obama and Putin agreed during a 35-minute meeting on the sidelines of a G20 summit in Turkey on the need for a political transition in Syria, saying events in Paris had made it all the more urgent.

Obama described Friday’s killing of more than 120 people in Paris, claimed by the radical Sunni militant group, as an attack on the civilized world and said the United States would work with France to hunt down those responsible.

“The skies have been darkened by the horrific attacks that took place in Paris just a day and a half ago,” Obama said.

“We will redouble our efforts, working with other members of the coalition, to bring about a peaceful transition in Syria and to eliminate Daesh as a force that can create so much pain and suffering for people in Paris, in Ankara, and in other parts of the globe,” he said, using the Arabic acronym for Islamic State.

U.S.-led efforts to combat Islamic State were complicated when Russia joined the conflict a month and a half ago, targeting what the West says are mainly areas where foreign-backed fighters are battling Assad, Moscow’s ally, rather than Islamic State.

The United States, Turkey and their allies want Assad out.

Obama huddled with Putin during a working lunch and the two agreed on the need for a Syrian-led transition including U.N.-mediated talks, the White House official said.

“Strategic objectives relating to the fight against the Islamic State are, in principle, very similar, but there are differences on the tactics side,” he said.

Their meeting builds on progress in Vienna, where foreign ministers on Saturday outlined a plan for a political process in Syria leading to elections within two years, although differences over Assad’s role remain.

The Paris attacks again demonstrated how Islamic State poses a threat far beyond its strongholds in Syria and Iraq.

Washington already expects France to retaliate by taking on a larger role in the U.S.-led coalition’s bombing campaign against Islamic State (ISIL).

U.N. Secretary-General Ban Ki-moon said he welcomed the renewed sense of urgency to find a solution to the war in Syria after the Paris attacks, adding the world had a “rare moment” of diplomatic opportunity to end the violence.

Obama wants to coax other European and Middle Eastern countries into more tangible steps to show their military commitment. He met Saudi Arabia’s King Salman, discussing the need to support the moderate Syrian opposition and the Iraqi government in the fight against Islamic State.

Obama said he also discussed in a meeting with Turkish President Tayyip Erdogan coordinating efforts to fortify the border with Syria, which Islamic State has used to smuggle supplies and foreign fighters.

The coordinated attacks by gunmen and suicide bombers in Paris on Friday put Obama and other leaders of the world’s major economies under increased pressure to find common cause.

It remains to be seen, however, whether Washington itself has an appetite for much deeper involvement after already stepping up air strikes and committing small numbers of special operations troops to northern Syria to advise opposition forces in the fight against Islamic State.

The Paris carnage, in which 129 people were killed in attacks on a concert hall, restaurants, bars and a sports stadium, also poses a major challenge for Europe, with populist leaders rushing to demand an end to an influx of refugees and migrants from the Middle East and Africa.

In a diplomatic coup for Europe and for Turkey, the G20 leaders will agree that migration is a global problem that must be addressed in a coordinated way, according to a draft communique seen by Reuters, although it has yet to be accepted by all and is due to be published on Monday.

Europe and Turkey, the most heavily hit by the crisis, had been pushing for the G20 to recognize the issue as a global problem and help to deal with it financially, despite opposition from China, India and Russia. A million migrants from the Middle East and Africa are expected to come to Europe this year alone.

According to a separate draft statement, they also agreed to step up border controls and aviation security in the wake of the Paris attacks, which they condemned as “heinous”.