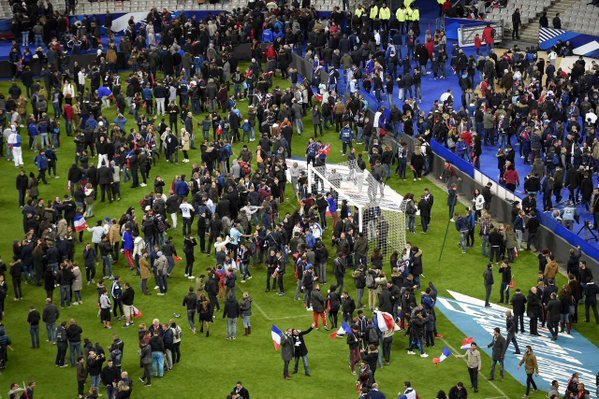 Paris has been rocked by a string of deadly attacks, leaving at least 140 people dead and many more wounded. President François Hollande has declared a state of emergency. Follow FRANCE 24’s live blog for all the latest developments.

At least 140 people are reported to have died in a string of attacks that began Friday evening just after 10 p.m. local time in at least seven locations in and around Paris.

Police have reported three of the hostage takers killed as elite units brought their operation at the Bataclan concert hall to an end.

Police have set up a special emergency number to call if you need help: 197.

French television and news services quoted the police as saying around 140 people had been killed at a concert venue where hostages had been taken in a two-hour standoff with the police, and perhaps many more killed in apparently coordinated attacks outside the country’s main sports stadium and at least five other popular locations in the city. But estimates on the total number of dead varied widely in the confusion.

Witnesses on French television said the scene at the concert hall, which can seat as many as 1,500 people, was a massacre. Ambulances were seen racing back and forth in the area into the early hours of Saturday morning.

The casualties eclipsed the deaths and mayhem that roiled Paris in the Charlie Hebdo massacre and related assaults around the French capital by Islamic militant extremists less than a year ago.

An explosion near the sports stadium, which French news services said may have been a suicide bombing, came as Germany and France were playing a soccer match, forcing a hasty evacuation of Mr. Hollande. As the scope of the assaults quickly became clear, he convened an emergency cabinet meeting and announced that France was placing severe restrictions on its border crossings.

“As I speak, terrorist attacks of an unprecedented scale are taking place in the Paris region,” he said in a nationally televised address. “There are several dozen dead, lots more wounded, it’s horrific.”

Mr. Hollande said that on his orders the government had “mobilized all the forces we can muster to neutralize the threats and secure all of the areas.” 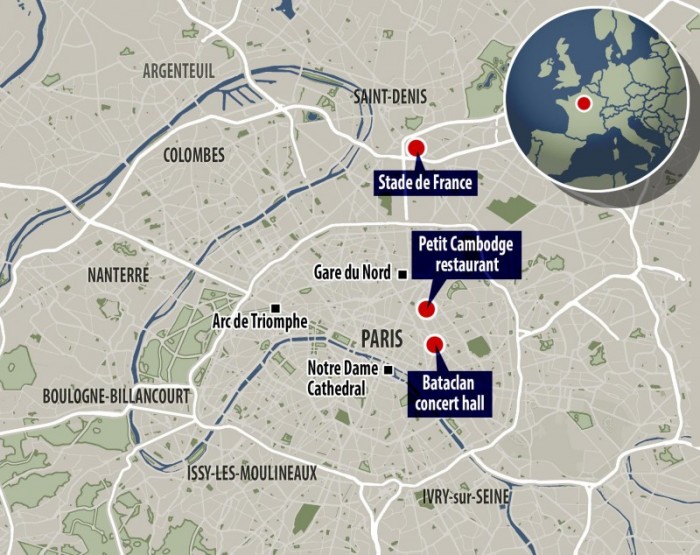 There was no immediate claim of responsibility, but Twitter erupted with celebratory messages by members and sympathizers of the Islamic State, the extremist group based in Syria and Iraq that is under assault by major powers including the United States, France and Russia.

The main shooting appeared to have broken out at a popular music venue, The Bataclan, where the American band Eagles of Death Metal was among those playing, and French news services said as many as 100 hostages may have been taken there — many of whom apparently were killed later. Some accounts said grenades had been lobbed inside the music hall.

A witness quoted by BFM television said he heard rounds of automatic rifle fire and someone shouting “Allahu akbar!” at The Bataclan.

Another witness who escaped the concert hall told BFM: “When they started shooting we just saw flashes. People got down on the ground right away.”

The police ordered bystanders in the that area to get off the streets as officers mobilized, French television reported.

Other French news media reported that Kalashnikov rifles had been involved in the shootings — a favored weapon of militants who have attacked targets in France — and that many rounds had been fired.

Julien Pearce, a journalist from Europe 1 radio, was inside the concert hall when the shooting began. In an eyewitness report posted on the station’s website, Pearce said several very young individuals, who were not wearing masks, entered the hall while the concert was under way armed with Kalashnikov assault rifles and started “blindly shooting at the crowd”.

“There were bodies everywhere,” he said.

Toon, a 22 year-old messenger, who lives near the Bataclan was going into the concert hall with two friends at around 10.30 p.m.(4.30 p.m. ET) when he saw three young men dressed in black and armed with machine guns. He stayed outside.

One of the gunmen began firing into the crowd. “People were falling like dominos,” he told Reuters. He said he saw people shot in the leg, shoulder, back and several people lying on the floor apparently dead.

There was no immediate verifiable claim of responsibility but supporters of the Islamic State militant group which controls swathes of Iraq and Syria said in Twitter messages that the group carried them out.

“The State of the caliphate hit the house of the cross,” one tweet said.

The assailants are believed to have blew themselves up with suicide belts as police closed in on them during a raid of the Bataclan concert hall,  reported the Associated Press.

The Paris police prefect said the attackers fired outside at nearby restaurants before going inside the music venue. Paris officials believe there were different sets of attackers involved. CNN reported that four attackers were killed at the music venue.

One member of the Los Angeles band Eagles of Death Metal was killed at the Bataclan concert hall in Paris, reported MSNBC.

Death toll has risen to 158

This is to remind all our readers to respect the community . Comments that contain personal attacks or inappropriate language will be removed.
For those who are new to this site please note that Ya Libnan is all about fixing Lebanon.We want our readers to come up with ideas that if implemented will make lebanon a better country.
Ya Libnan is a democratic venue that is open to anyone wishing to contribute any ideas to improve Lebanon. Our only wish is to maintain the civility of the discussions and that is why those who have not been able to abide by this rule have been banned from participating in this forum . We don’t want or expect anything from anyone …better lebanon is the only reward we seek. Help us get there!