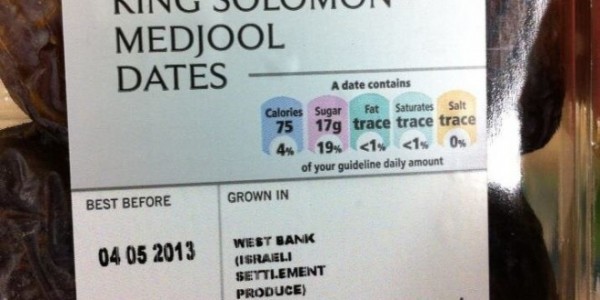 The European Union on Wednesday said it backed the labelling of products from Jewish settlements, in a move that Israel has warned will harm the peace process with the Palestinians.

At a meeting in Brussels, the European Commission, the EU’s executive, adopted ‘the Interpretative Notice on indication of origin of goods from the territories occupied by Israel since June 1967,” said an EU official.

Israeli officials were briefed ahead of the decision and some suggested it was anti-Semitic.

“This is a technical measure, not a political one,” one Commission source who declined to be named said on Tuesday. “The occupied territory is not part of the sovereign state of Israel, so goods cannot be sold as ‘Made in Israel’.”

The EU does not recognise Israel’s occupation of the West Bank, Gaza, East Jerusalem and the Golan Heights, lands it captured in the 1967 Middle East war. It says the labelling policy aims to distinguish between goods made inside the internationally accepted borders of Israel and those outside.

The EU does not recognise Israel’s occupation of the West Bank, Gaza, East Jerusalem and the Golan Heights, lands it captured in the 1967 Middle East war. It says the labelling policy aims to distinguish between goods made inside the internationally accepted borders of Israel and those outside.”

Britain, Belgium and Denmark already affix labels to Israeli goods, differentiating between those from Israel and those, particularly fruits and vegetables, that come from the Jordan Valley in the occupied West Bank. Now all 28 EU member states would have to apply labels.

While there is no EU official wording, goods must carry the word “settlement” on the label when sold in European shops. If an Israeli farmer refuses, a retail outlet can do so, as the European Commission has sufficient information about where goods come from.

Israel’s ambassador to the European Union, David Walzer, warned it could make difficult peace talks between Israel and the Palestinians harder and the EU might no longer be a welcome broker.

“We made it very clear that we welcome EU contributions to the peace process,” Walzer said before the decision was formalised. “This might force us to reconsider that.”

A second Commission source said the guidelines were requested by EU governments who sought clarity on existing EU labelling rules and that the five page document of some 12 paragraphs did not constitute new legislation.

Since 2004, Israeli settlement products have not benefited from trade preferences to the European Union, while for all countries the EU has agricultural legislation that requires labelling of the origin of fruit, vegetables and honey.

Industrial goods, including processed food, are not subject to mandatory labelling under EU law, but can be voluntary.

Israel’s Economy Ministry estimates the impact will be about $50 million a year, affecting fresh produce such as grapes and dates, wine, poultry, honey, olive oil and cosmetics.

That is around a fifth of the $200-$300 million worth of goods produced in settlements each year, but a drop in the ocean next to the $30 billion of goods and services Israel exports to the EU annually, a third of all its exports.