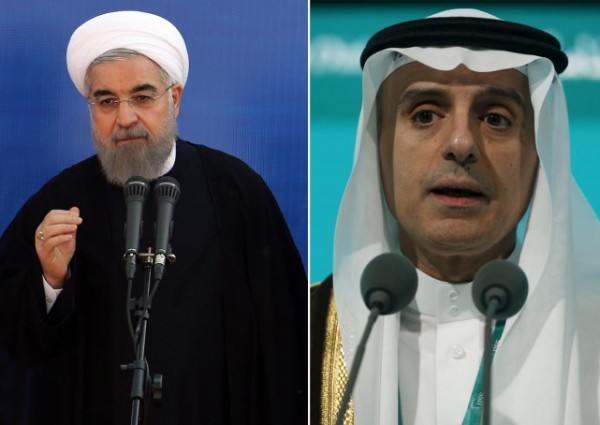 Iran said on Monday it would quit Syria peace talks if it found them unconstructive, citing the “negative role” of Saudi Arabia, in the latest twist in a spat between the regional rivals that bodes ill for efforts to ease turmoil across the Middle East.

Increasingly bad-tempered exchanges between the conservative Sunni-ruled kingdom and the revolutionary Shi’ite theocracy have dampened hopes of improved ties after the adversaries sat down for their first meeting to discuss the Syria war last week.

“In the first round of talks, some countries, especially Saudi Arabia, played a negative and unconstructive role … Iran will not participate if the talks are not fruitful,” ISNA cited deputy Foreign Minister Hossein Amir Abdollahian as saying.

Delivering unusually personal criticism, Iranian President Hassan Rouhani appeared to reprimand Saudi Foreign Minister Adel al-Jubeir, who, on Saturday, lashed out at Tehran for what he termed its interference in regional countries.

“An inexperienced young man in a regional country will not reach anywhere by rudeness in front of elders,” Rouhani was quoted as saying by state news agency IRNA on Monday. He did not name the ‘young man’ but Jubeir was assumed to be his target.

Jubeir, in his mid-50s, took up his job on the death this year of veteran predecessor Prince Saud al-Faisal at age 75.

World and regional powers including Iran and Saudi Arabia met in Vienna on Friday to discuss a political solution to Syria’s civil war but failed, as expected, to reach a consensus on the future of President Bashar al-Assad. Iran backs Assad in the war while Saudi Arabia supports rebels seeking to oust him.

It was the first time Tehran and Riyadh were at the same table to tackle a war that has evolved into a wider proxy struggle for regional dominance between Russia and Iran on Assad’s side and Turkey, U.S.-allied Gulf Arab states and Western powers who support rebels to various degrees.

Saudi Arabia wants Assad gone, and has provided support to Syria’s moderate opposition forces, while Iran has sent in fighters and material support to bolster Assad.

Less than 24 hours after the Vienna talks, Jubeir used a high-profile regional security conference in the Gulf Arab kingdom of Bahrain, which Iran’s government did not attend, to attack Iranian policies.

Jubeir accused Iran of attempting to smuggle weapons to Bahrain and Saudi Arabia, as well as meddling in Lebanon, Syria, Iraq and Yemen, something he said was “driving the negativity” in Iran-Saudi relationship.

“We have extended our hand in friendship to Iran,” said the soft-spoken Jubeir, adding that Riyadh had made the point “time and time again” that it sought good relations with Tehran.

Speaking to Iranian media, Abdollahian warned Jubeir “not to test our patience”. He did not elaborate.

In 2011, U.S. authorities said they had foiled a plot by two men linked to Iran’s security services to assassinate Jubeir, then the Saudi ambassador in Washington. Iran denied any role.

Riyadh had long refused to accept any Iranian presence at Syria peace talks. Dynamics changed after Iran sealed a deal on its disputed nuclear program with world powers that began to ease its international isolation.

The start of Russian air strikes in Syria in support of Assad helped to persuade Western powers that as one of Assad’s top supporters, Tehran had to be at the negotiating table too.