Syrian MP: US decision to send troops into Syria is an act of aggression 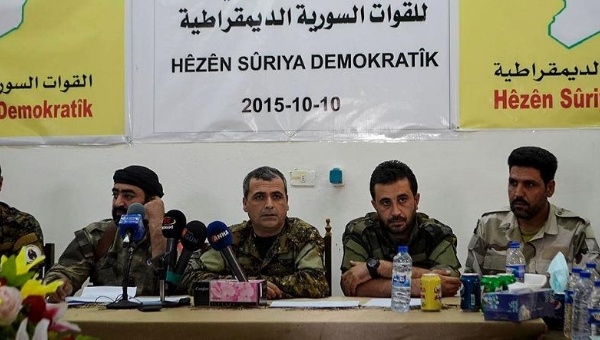 Democratic Forces of Syria leaders . The US backed rebel alliance on Saturday launched an offensive against Islamic State in the northeast province of Hasaka
Share:
By ALBERT AJI and BASSEM MROUE
Beirut, Lebanon – The United States’ decision to send troops into Syria is an act of aggression because it does not have the government’s agreement, a Syrian member of parliament said Saturday.

Sharif Shehadeh told The Associated Press that the troops will have no effect on the ground, but that Washington wants to say it is present in Syria.

“What has happened to make America realize, after five years, that it should send between 30 and 50 military advisers?” asked Shehadeh, referring to the start of the country’s crisis in March 2011 that has since killed more than 250,000 people.

American officials say up to 50 special operations troops will be sent to assist Kurdish and Arab forces in northern Syria.

A U.S.-led coalition has been targeting the Islamic State group with airstrikes since September 2014, killing 12,000 extremists without weakening the group.

The decision to send U.S. troops to Syria comes a month after Russia began launching airstrikes against insurgents in the country. Russia’s airstrikes were agreed upon with the Syrian government.

The U.S. has conducted special operations raids in Syria before and is expected to continue to carry out more unilateral raids.

The U.S. decision came as activists said some rebel groups, as well as the main U.S.-backed Kurdish militia known as the YPG, are preparing for an offensive against IS in its de facto capital of Raqqa. Earlier this month, U.S. cargo planes dropped small arms and ammunition to Arab groups fighting IS in northern Syria in what appeared to be preparation for the attack.

On Saturday, the Democratic Forces of Syria, a coalition of Arab, Christian and Kurdish factions in northern Syria, declared that they have started an operation to “liberate” areas south of the northeastern city of Hassekeh.

IS has several strongholds in the predominantly Kurdish province of Hassakeh that borders Iraq.

The announcement was carried by the Britain-based Syrian Observatory for Human Rights and social media pages of rebel groups.

The Rebels Army group carried the statement from the coalition’s spokesman who goes by the name of Abu Ali as vowing to “cleanse Syria’s soil from the filth of terrorist groups.”

In the northern province of Aleppo, airstrikes believed to have been carried out by Russian warplanes have killed at least 64 people since Friday, the Observatory said. Another activist group, the Local Coordination Committees said airstrikes have killed about 75 people.

The surge in violence came after more than a dozen countries, including the U.S. and Russia, agreed during talks in Vienna on Friday to pursue a new peace effort involving Syria’s government and opposition groups.

Also Saturday, international medical aid organization Doctors Without Borders said an airstrike and shelling in a market in the rebel-held Damascus suburb of Douma the previous day killed at least 70 people and wounded 550.

The group, also known by its French acronym MSF, said its facility nearest to the market had been bombed a day earlier and medical workers struggled to cope with the influx of wounded people. Many needed amputations and blood infusions, and the makeshift hospital could not handle the flood of critically wounded patients with its limited resources, the group said.

MSF has sent emergency supplies of IV fluids and bags of blood to the Douma hospital, where 15 people died and 100 were hurt on Thursday when the entrance was bombed.

“This massive bombing on a crowded market and the repeated destruction of the few available medical facilities breaches everything that the rules of war stand for,” says Brice de le Vingne, Director of Syria Operations for MSF.