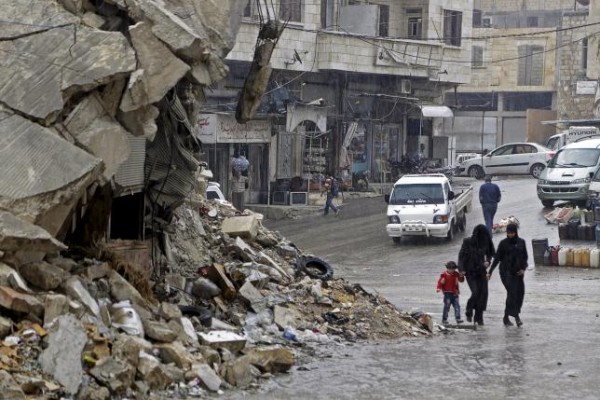 Civilians walk in the rain past a damaged building in the rebel-controlled area of Maaret al-Numan town in Idlib province, Syria October 28, 2015. REUTERS/Khalil Ashawi
Share:

The United States is intensifying its diplomacy to end the “hell” of Syria’s civil war even as it increases support for moderate rebels fighting Islamic State militants, U.S. Secretary of State John Kerry said on Wednesday

The chief U.S. diplomat leaves for Vienna later in the day for talks among more than a dozen foreign ministers on ending the four-and-a-half year conflict. Iran is for the first time taking part in such talks, which will also include Russia, Saudi Arabia and Turkey.

In a speech, Kerry made a case for wider U.S. engagement in the Middle East despite growing American energy independence, saying that the conflicts in Syria, Iraq and between Israel and the Palestinians can all threaten U.S. interests and inflame anti-U.S. sentiment at home and abroad.

He also suggested that the United States currently faces the best opportunity in years to end the Syrian civil war, in which more than 200,000 people have died and millions have been displaced inside the country and forced to flee abroad as refugees.

“The challenge that we face in Syria today is nothing less than to chart a course out of hell,” Kerry said in a speech at the Carnegie Endowment for International Peace think tank.

Kerry said the United States was providing more military supplies to moderate rebels in northern Syria to help them hold territory they have seized and to pressure the Syrian city of Raqqa, a stronghold of the Islamic State militant group.

The group, which is also known as Daesh and by the acronyms ISIL and ISIS, has seized swathes of territory in both Syria and Iraq over the last year and a half. A U.S. military effort to train and arm thousands of rebels abroad has failed, leading to a bigger push to support rebel fighters inside the country.

“At the end of the day, nothing would do more to bolster the fight against Daesh than a political transition that sidelines Assad so that we can unite more of the country against extremism,” Kerry said.