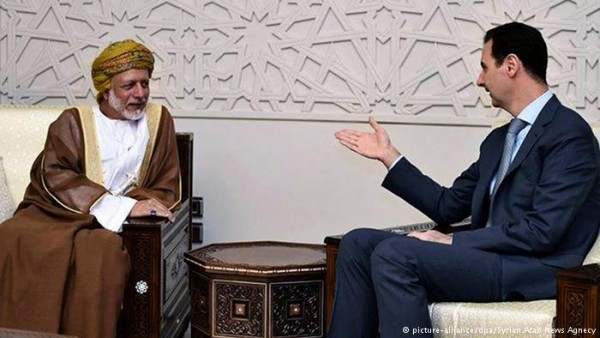 Oman’s foreign minister and Syrian President Bashar al-Assad met in Damascus on Monday and discussed ideas that have been put forward to address the Syrian crisis, the Syrian state news agency SANA said.

The meeting took place after Assad’s main ally Russia said Syria needed to prepare for parliamentary and presidential elections, Moscow’s most specific call for political renewal since the war began. There has been no official response from the Syrian government on Russia’s comments.

Oman, a U.S-allied Gulf Arab state, sees itself as a conciliator in a volatile region and has a history of constructive relations with Syria’s other close ally, Iran.

Diplomats have said it could play the role of mediator between Syria and Assad’s adversaries, which include Washington and other Gulf states.

Alawi stressed the importance of the unity and stability of Syria and said his country “is continuing to make all efforts possible to help find a solution to the crisis in Syria”, the agency said.

Assad reiterated that eliminating terrorism would help the success of any political track in Syria, SANA said.

Assad also welcomed Oman’s efforts to help Syrians “realize their aspirations in a way that puts an end to the suffering caused by terrorism and preserves the country’s sovereignty and territorial integrity”, SANA added.

Oman has received parties from both sides of the war in recent weeks. Syria’s foreign minister traveled to Oman to meet Alawi in August and the head of the main Western-backed Syrian political opposition met with Alawi in Muscat earlier this month.

Although there has been a series of meetings between major powers involved in Syria since Russia intervened militarily, divisions remain over the fate of Assad in any solution to a crisis that has killed a quarter of a million people.

Moscow says Assad must be part of any transition and that the Syrian people will decide who rules them. Washington has said it could tolerate Assad during a short transition period, but that he would then have to exit the political stage.

Germany, which has received tens of thousands of refugees fleeing conflicts including Syria, said on Monday it could not imagine a scenario where Assad plays a role in a transitional government with full executive powers.

“As far as I can see, there are many players and powers in the region, including Turkey, Saudi Arabia, other Gulf states, for which it is unthinkable, and we can’t imagine this either, that Assad could be part of a transitional government with full powers,” a German Foreign Ministry spokesman said.