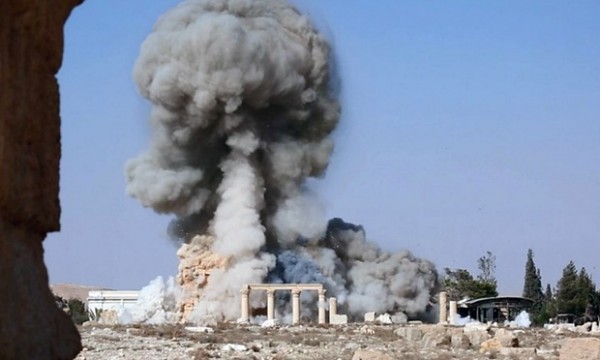 A photograph released on 25 August 2015 on a social media site used by Isis militants showing smoke from the destruction of the 2,000-year-old Temple of Baalshamin in Palmyra. Photograph: Uncredited/AP
Share:

The Islamic State executed three detainees in the ancient Syrian city of Palmyra by strapping them to pillars and then blowing them up along with the antiquities, the Syrian Observatory for Human Rightsreported.

“This execution is the first of its kind by the Islamic State, the organization (that) in recent months has invented new ways of execution,” the observatory said in a statement late Monday. The London-based group said it obtained its information from local sources.

The report came just days after the observatory released footage Saturday that appeared to show Islamic State militants executing a teenage Syrian soldier by running him over with a tank. Before being executed, the soldier is shown “confessing” to having used a tank himself to run over bodies of Islamic State soldiers, the observatory said.

The Islamic State has consistently used the Internet and social media to publicize its brutality. Last year, the terror group released a series of videos showing the beheadings of western aide workers. In January, it released a video showing a young boy executing prisoners the Islamic State called “spies.”

The Islamic State also has been unabashed in its destruction of antiquities at Palmyra, claiming the archaeological sites and statues promote idolatry.

The first-known settlement at Palmyra dates to the second millennium B.C. The Islamic State took the city from Syrian military forces in May during an offensive that resulted in domination of a wide swath of the country. Islamic State militants beheaded the city’s antiquities expert and have been destroying archaeological artifacts ever since, sometimes releasing photos as proof.

In August, the Islamic State announced the destruction of the Baalshamin temple, which had an altar dating to 115 AD, and released photos of the effort. Irina Bokova, the director-general of UNESCO, described the temple’s destruction as war crime and “immense loss for the Syrian people.”

Earlier this month, the militants reportedly blew up Palmyra’s iconic Arch of Triumph, resulting in Maamun Abdulkarim, Syria’s head of antiquities, pleading with the international community to “find a way to save Palmyra.”