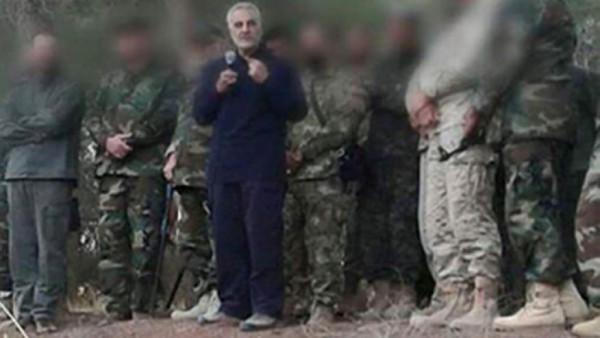 Maj. Gen. Qassem Soleimani, seen in blue suit, is commander of Iran’s Islamic Revolutionary Guards Corps or Qods Force. Soleimani’s presence in Syria is an indicator of how serious Iran’s involvement in the civil war is.
Share:

Iran’s shadowy top military commander has been spotted in Syria addressing Iranian military officers and members of the Lebanese militant group Hezbollah, according to photos that emerged Thursday on social media.

On Thursday, Reuters confirmed Soleimani’s presence in the western province of Latakia in Syria. The news agency said Soleimani was seen addressing Iranian officers and Hezbollah fighters with a microphone while clad in dark-colored clothes.

Iran, Russia and Cuba have banded together to help Syrian dictator Bashar al-Assad in his bid to maintain power over ISIS — which controls large swaths of Iraq and Syria — and also Al Qaeda affiliate Al Nusra.

Syria’s bloody civil war is in its fourth year and has so far cost an estimated 250,000 people their lives and sparked a humanitarian crisis as displaced refugees flee the embattled nation. The U.S., meanwhile, has called for the ouster of al-Assad, and is supporting a rebel group known as the Free Syrian Army.

The 58-year-old Soleimani, who is forbidden under international sanctions from leaving Iran, has served since 1998 as commander of its Quds Force — a special military division that oversees clandestine operations. Soleimani has previously been spotted in Syria and Iraq prior to major battles against the Islamic State. Soleimani is listed as a terrorist by the U.S., and the Quds Force has a long history of aiding Hezbollah in Lebanon and Hamas in the Palestinian territories.

Syrian troops and their allies launched an offensive Thursday in the central province of Homs and Russia’s government said its warplanes carried out a rare airstrike near Damascus targeting an ISIS group position southeast of the capital. The offensive came as a senior Iranian official told reporters in Damascus that Tehran would consider sending troops to Syria only upon a request from the Syrian government.

Alaeddin Boroujerdi, the head of an influential parliamentary committee on national security and foreign policy, reiterated his country’s full support for the Syrian government, stressing that a political solution is the only way for Syria to emerge from the current crisis.

Boroujerdi’s comments came despite reports that hundreds of Iranian troops have already been deployed in northern and central Syria, dramatically escalating Tehran’s involvement in the civil war as they join allied Hezbollah fighters in an ambitious offensive to wrest key areas from rebels. A regional official who has knowledge of operational details in Syria told The Associated Press on Wednesday about 1,500 Iranian revolutionary guards have arrived in Syria in the past two weeks, taking advantage of Russian air cover. Other Syrian activists also reported the fresh arrival of Iranian troops.

Asked whether Iran has forces on the ground, Boroujerdi said: “According to Iran’s anti-terrorism strategy, we submitted weapons and experts to those two countries (Iraq and Syria). Any other request will be considered and debated in Iran.”

Iranian and Syrian officials have long acknowledged Iran has advisers and military experts in Syria, but denied the presence of any ground troops. Wednesday’s statements by the regional official and activists were the first confirmation of Iranian fighters taking part in combat operations in Syria.