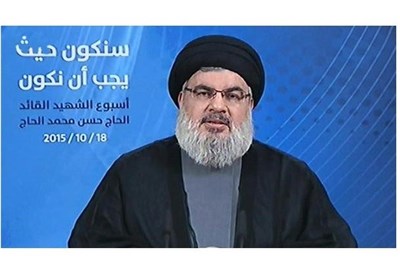 The leader of Lebanon’s Shiite Hezbollah group has called the violent unrest in Israel a “renewed intifada,” describing it as the hope for salvation for the Palestinians.

Hassan Nasrallah’s remarks were broadcast Sunday. He said the wave of attacks against Israelis was carried out by a “new generation” of Palestinians who believe in “resistance” and who must be supported by all in the region.

Palestinian assailants have been carrying out near-daily stabbing attacks against Israelis that have spread from Jerusalem to elsewhere in the country.

Nasrallah said: “It is everyone’s responsibility to stand by it and help it, each with their own capabilities, abilities and circumstances.”

Israel and Hezbollah fought a month-long war in 2006. They remain bitter enemies.

Addressing the domestic situation  Nasrallah said his party does not approve to topple the cabinet despite its slow performance, affirming that Hezbollah commits to dialogue despite warnings that some parties might withdraw from the sessions.

“We reaffirm our commitment for dialogue and convergence among the Lebanese. We have participated in this government for the security and political stability in Lebanon,” said Nasrallah .

“We refuse to be blackmailed. Those who wish to stay in the dialogue sessions and the government are welcome, and those who wish to leave, are free to do so,” added Nasrallah.

On Friday the Future Movement which is headed by  former PM Saad Hariri   warned that it might quit the government and the ongoing dialogue if the political deadlock continues in the country.

“Despite the government’s sluggish performance we voice calls on maintaining and not toppling it.Toppling the government means vacuum and collapse,” he added in his speech commemorating the death of  Hezbollah commander  Hassan Hussein al-Hajj who was recently killed in Syria while fighting alongside forces loyal to president Bashar al Assad . Al-Hajj was also known as  Abou Mohammed al-Iqlim

On the participation of Hezbollah  in the Syria war, Nasrallah said: “Our people feel safe because of Abou Mohammed al-Iqlim  and the Resistance together with the Lebanese army. I would like to assure all that the Resistance has had great leaders for many years.”

Al-Hajj died on October 10 fighting in Sahl al-Ghab, a strategic plain in northwest Syria where Hezbollah has dispatched fighters in support of the embattled regime of Bashar Assad, reports say.

Nasrallah added that his group was fighting a “critical and definitive battle” in Syria with a greater presence than ever before.

Addressing the fighters he said: “Maintain the strength that you have built and work on developing it because it is the road to preserve our country and people.”

Nasrallah said Hezbollah members fought “for 30 years on the border with Palestine and have now gone to Sahl al-Ghab, where Abu Mohammed died, to the borders with (Syrian provinces) Hama, Idlib, Latakia, and Aleppo.”

Hezbollah has sent thousands of fighters to support the Syrian army’s ground offensives in the country’s center, north, and northwest, recently bolstered by Russian air strikes.

But the group has been criticized for diverting resources from combating its traditional enemy to the south, Israel, which Hezbollah most recently clashed with in a month-long war in 2006.

Nasrallah tried to temper that criticism by saying Israel and extremist factions in Syria, like the Islamic State group, had the same goals.

“The two projects — the Zionist and the takfiri (extremist Sunni) — want to achieve the same result: destroying our peoples and our societies,” he said.

“We have been able to confront the takfiri for over four years now. If it was not for the perseverance on the ground in the face of the Islamic State, where would the region be today?” he asked.

He acknowledged that Hezbollah’s fight in Syria “may be long,” but said it would be necessary to “protect these countries and this region.”

YL with AP and AFP