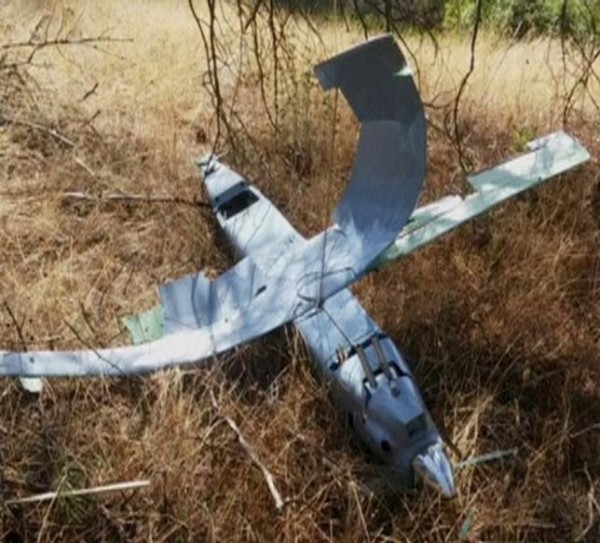 A still photograph used in a video shows a downed drone in Deliosman Village, Turkey October 16, 2015. The drone was Russian-made, but Moscow has told Ankara the unmanned aircraft did not belong to Russia .credit REUTERS/Halil Dogan via Reuters TV
Share:

Turkey shot down a drone on Friday in an incident highlighting the dangers of multiple air combat operations over Syria, where government troops and their allies backed by Russian jets have launched an offensive against rebels near Aleppo.

The army offensive south of the city, backed by Hezbollah and Iranian fighters, further expands its 10-day-old counter-attack in western Syria against insurgents battling to overthrow President Bashar al-Assad.

The army campaign has been coordinated with Russian jets, which began air strikes in support of Assad on Sept. 30, and Syria’s own air force.

A U.S.-led coalition of Western and Arab forces has been flying combat missions overSyria for more than a year, while Israeli jets have also struck targets in Syria during the four-year-old civil war.

That has left Syria’s airspace crowded with warplanes from rival, or even hostile powers, pursuing competing military strategies, heightening the risk of aerial confrontation.

A U.S. official said Washington believed it was of Russian origin, but the Russian defense ministry said all of its planes in Syria had safely returned to base and that all its drones were operating “as planned”. NATO said Turkey was investigating where the drone came from.

The Turkish military said the aircraft it shot down had continued on its course despite three warnings, in line with Turkey’s rules of engagement. Broadcaster NTV said it had come 3 km (2 miles) into Turkish air space.

Turkey has already complained of Russian warplanes violating its air apace along the border with Syria earlier this month.

The Russian Defense Ministry said later on Friday it had established direct contact with the Turkish military to avoid incidents with flights near the border, Interfax news agency reported.

Russia had set up a hotline between a base used by its air force in Syria and the Israeli air force command center to coordinate on Syria flights.

The ministry also said it had agreed the technical details for an agreement with the United States on flight safety over Syria and a final memorandum would be signed soon.

Russia’s air strikes in Syria appear to have struck mainly foreign-backed rebels rather than the Islamic State fighters which Moscow say are the target of its campaign.

On Friday, Russian warplanes hit areas in support of the army’s offensive south of Aleppo, which lies around 35 km (20 miles) from the Turkish border.

The assault means the army is now pressing insurgents on several fronts near Syria’s main cities in the west, control of which would secure Assad’s hold on power even if the east of the country is still held by Islamic State.

Control of Aleppo, still home to two million people, is divided between the government and rebels. Friday’s offensive appeared to be aimed at an area south of Aleppo, rather than the city itself.

“This is the promised battle,” a senior military source in Syria said of the offensive backed by hundreds of Hezbollah and Iranian forces, which he said had made some gains on the ground.

It was the first time Iranian fighters had taken part on such a scale in the Syrian conflict, he said, although their numbers were modest compared to the army force. “The main core is the Syrian army,” the source said.

Senior regional sources said this week that Iran had sent thousands of troops to Syria to bolster an offensive already underway in Hama province and ahead of the Aleppo attack.

Iran says it has sent weapons and military advisers to support its ally Assad, but has denied providing troops.

The Syrian army said in a statement its forces were fighting in areas including Joubar and Harasta town near the capital Damascus, Homs and Aleppo provinces.

“Military operations against the terrorist groups continue along with intensive air strikes carried out by Syrian air force and benefiting from the results of Russian strikes,” it said.

Rami Abdulrahman, director of UK-based monitoring group the Syrian Observatory for Human Rights, said there were heavy clashes near the Jebel Azzan region, about 12 km (8 miles) south of Aleppo city.

The area that the army and Russian jets were targeting was close to a main road heading south towards the capital Damascus, Abdulrahman said.

The army had recaptured the village of Abtin from rebel fighters, he said, as well as a tank battalion base close to Sabiqiya village. Both villages lie close to Jebel Azzan. Rebels had hit one army tank with a U.S.-made TOW anti-tank missile.

The military source said the rebel fighters were mainly from the Islamist group Ahrar al-Sham and al Qaeda’s Syrian wing, the Nusra Front, as well as the Suqour al-Sham and Failaq al-Sham insurgent groups.

The head of another rebel brigade, Fursan al Haq, which is backed by Assad’s foreign opponents and operates under the umbrella of the Free Syrian Army, said his fighters had sent more TOW missiles to the Aleppo area to try to stem the attack.

“The battle is ongoing, and the resistance is stronger than the attack,” Fares al Bayoush, told Reuters.

Since Russia launched air strikes in support of Assad, the army has waged offensives against several insurgent-held regions in western Syria, starting with areas of Hama, Idlib and Latakia provinces taken by the rebels over the summer.