Russia, US clash at UN over Syria air strikes 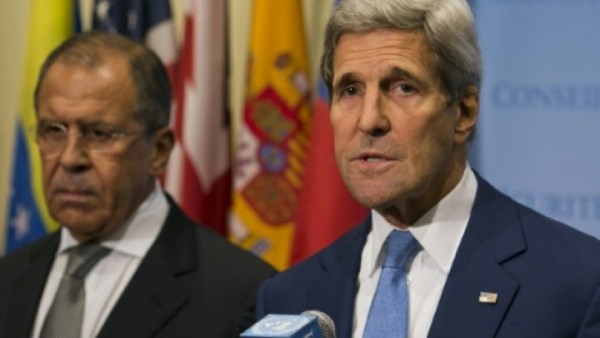 US Secretary of State John Kerry and Russia Foreign Minister Sergei Lavrov speak to the media after a meeting concerning Syria, at UN headquarters in New York on September 30, 2015 AFP
Share:
Russia and the United States faced off at the United Nations on Wednesday over parallel air campaigns in Syria, with both sides claiming legitimacy for their actions but differing over the role of Syrian President Bashar al-Assad.

Russia launched its first air strikes in Syria since the Middle Eastern country’s civil war began in 2011, giving only an hour’s notice to the United States, which has led a coalition of Western allies and regional states that has been flying missions there for a year.

But a joint media appearance by the two could not paper over their differences, with Moscow saying it was hitting Islamic State militants and Washington questioning this and suggesting Russia’s aim was to prop up Syrian President Bashar al-Assad.

The United States, France and other allies questioned whether the Russian planes had hit Islamic State positions, saying they were in fact aimed at Western-backed rebels who have fought bothIslamic State and Assad’s forces.

Kerry told the Security Council that the U.S.-led coalition would keep flying, saying it had done so on Wednesday. “These strikes will continue,” he said.

The Russian attacks occurred before Moscow and Washington had begun agreed talks on averting clashes between different militaries in the theater of battle. U.S. President Barack Obama and Russian President Vladimir Putin, meeting at the United Nations on Monday, had agreed that such consultations would take place.

Putin, speaking in Moscow, said the air strikes would be limited and said he hoped Assad was ready for political reform and a compromise for the sake of his country and people.

Reflecting growing tension between the big powers, Kerry phoned Lavrov early on Wednesday to tell him the United States regarded the strikes as dangerous, a U.S. official told Reuters, speaking on condition of anonymity.

The Homs area attacked by Russian planes is crucial to Assad’s control of western Syria.

Insurgent control of that area would bisect the Assad-held west, separating Damascus from coastal cities where Russia has military facilities.

“We must not and will not be confused in our fight against ISIL with support for Assad,” Kerry said, using an acronym for Islamic State. “ISIL itself cannot be defeated as long as Bashar al-Assad remains president of Syria.”

But he said if Russia was genuinely committed to fighting Islamic State, “we are prepared to welcome those efforts and to find a way to deconflict our operations and thereby multiply the military pressure on ISIL and affiliated groups.” The head of the Syria opposition, Khaled Khoja, said the Russian air strikes had hit four districts, killing 36 civilians, but no rebel fighters.

“Russia is intervening not to fight ISIL, but to prolong the life of Assad and support the continuous killing on a daily basis of civilians,” Khoja told Reuters in an interview, adding that the areas targeted were where opposition groups had defeated Islamic State a year ago.

Russia circulated a draft Security Council resolution that Putin has said would be “aimed at coordinating the actions of all forces that confront Islamic State.” Lavrov said it would be discussed over the next month.

The draft, seen by Reuters, welcomes efforts of countries fighting Islamic State, al Qaeda, Nusrah Front and other linked groups and calls upon them “to coordinate their activities with the consent of the States, in the territories of which such activities are conducted.”

The U.S.-led coalition informed Syria when it began air strikes a year ago but did not seek permission. Coalition members say they are acting in collective self-defense at the request of neighboring Iraq. Russia has justified its strikes by saying Syria requested its military assistance.

The Russian draft resolution also asked states combating extremist groups in the region to submit periodic reports to the council on their activities.

French Foreign Minister Laurent Fabius said Paris would only support the proposal if three conditions were met. He said Russia needed to state clearly who the enemy was, push Assad to stop indiscriminate barrel bombing of civilians, and make clear that Assad would not be in government after a political transition.