‘Syria is emptying’ as people flee the war 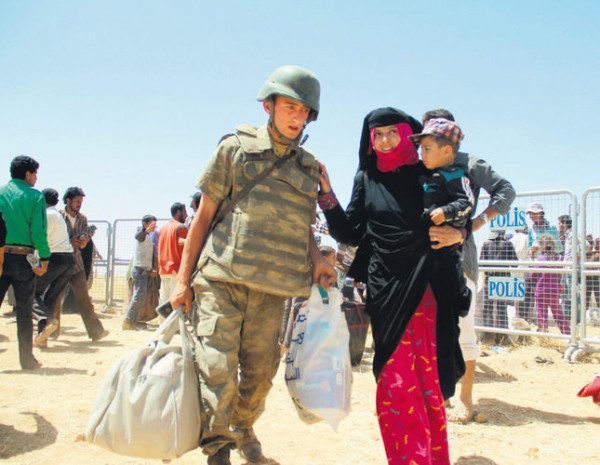 ‘Syria is emptying’. A Turkish soldier carrying a Syrian woman’s bags as she crosses into Turkey from Syria.
Share:
Beirut, Lebanon – A new exodus of Syrians is fueling the extraordinary flow of migrants and refugees to Europe, as Syria’s four-year-old war becomes the driving force behind the greatest migration of people to the continent since the Second World War.

Syrians account for half of the 381,000 refugees and migrants who have sought asylum in Europe so far this year, which is in turn almost a doubling of the number in 2014 — making Syrians the main component of the influx.

The continued surge through Europe prompted Hungary, Austria and Slovakia to tighten border controls Monday, a day after Germany projected that in excess of a million people could arrive by year’s end and began to impose restrictions on those entering the country.

How many more Syrians could be on the way is impossible to know, but as the flow continues, their number is rising. According to the U.N. High Commissioner for Refugees, 78 percent of those who washed up on inflatable dinghies on the beaches of Greece in July were Syrian, the latest month for which figures are available.

Some were already among the 4 million refugees who have sought sanctuary in neighboring countries, but many also are coming from inside Syria, constituting what Melissa Fleming of the UNHCR called a “new exodus” from the ravaged country. They are bypassing the refugee camps and heading straight for Europe, as the fallout from a war President Obama once called “someone else’s civil war” spills far beyond Syria’s borders.

More are on the way. Syrians are piled up on the streets of the Turkish port city of Izmir waiting for a place on one of the flimsy boats that will ferry them across the sea to Greece, and they say they have friends and family following behind.

“Everyone I know is leaving,” said Mohammed, 30, who climbed three mountains to make his way across the Turkish border from the city of Aleppo with his pregnant wife, under fire from Turkish border guards. “It is as though all of Syria is emptying.”

Analysts say it was inevitable it would come to this, that Syrians would eventually tire of waiting for a war of such exceptional brutality to end. At least 250,000 have been killed in four ferocious years of fighting, by chemical weapons, ballistic missiles and the barrel bombings by government warplanes that are the biggest single killer of civilians, according to human rights groups.

Men on both sides die in the endless battles between the government and rebels for towns, villages and military bases that produce no clear victory. The Islamic State kills people in the areas it controls with beheadings and other brutal punishments. The United States is leading a bombing campaign against the Islamic State but has shown scant interest in solving the wider Syrian war, which seems destined to only escalate further with the deepening involvement of Russian troops.

“It should surprise no one. Hopelessness abounds,” said Fred Hof, a former State Department official who is now with the Atlantic Council. “Why would any Syrian with an option to leave and the physical ability to do so elect to stay?”

There are other nationalities, too; refugees from conflict zones such as Iraq, Afghanistan and Somalia, alongside a small number of economic migrants from countries that include Bangladesh, Pakistan and Senegal.

But overwhelmingly this is a crisis of people fleeing war, and above all, the one in Syria, Fleming said.

“In the absence of the Syrians coming in the numbers they are coming, there wouldn’t be this huge surge in numbers,” she said. “This is why we are calling it a refugee crisis, not a migrant crisis.”

The exodus speaks in part to the deficiency of the underfunded aid effort, which has failed to provide anything more than basic subsistence to the refugees who have already fled the conflict into Jordan, Lebanon, Turkey and Iraq.

Since the flow of refugees first began in 2012, U.N. officials have repeatedly warned of the consequences of neglecting the refugee crisis, Fleming said.

“This was something Syrians felt they could tolerate for a certain amount of time because they hoped they could go home,” she said. “But with that hope becoming dimmer and dimmer and conditions becoming even harder, no one should question or be amazed at the large numbers of Syrians risking their lives to get to Europe.”

Interviews with the Syrians crowding into Izmir to make the sea crossing from Turkey to Greece suggest that just as many are arriving from inside Syria.

They come from every corner of Syria, but mainly the government and rebel-held areas that are more densely populated and more fiercely contested than the desert territories held by the Islamic State.

Their sad stories track the tides of a war that has been largely ignored by the outside world.

Ramadan Mohammed, 53, a widower who lost his leg in shelling in Aleppo in 2012, spends his days on a blanket on the street, waiting for another chance to board a boat after multiple failed attempts. It isn’t easy to climb into a flimsy dinghy with only one leg, he said, and if it sinks, as many do, he won’t be able to swim.

But he grew despondent living alone in a tent in a refugee camp in Lebanon, and he hopes he will be able to find a job in Europe.

Mohammed Hassan, 33, fled to a refugee camp in Lebanon from the town of Yabroud outside Damascus after Hezbollah fighters captured it from rebels in 2014. He said he could no longer bear watching his three children grow up without going to school, and he plans to bring them to Europe after he has settled there.

“My wife wants me to go so that the children can get an education,” he said.

Most making the journey are men, in part because families prefer to send their fathers and sons on the dangerous trek, to send later for their relatives after they have secured legal residency, Fleming said.

But many are young and single, escaping a war they might otherwise have to fight.

Saleh, 24, and his friend Abdul-Qader, 27, were soldiers in the Syrian army until rebels overran their checkpoint in the province of Idlib last year. They managed to get away but felt betrayed by their government’s failure to send reinforcements or supplies to their besieged post.

“We were with the regime, but when they didn’t come to defend us, we decided to desert,” Saleh said. The pair have been on the run since, finding occasional work, and now have saved enough for the trip.

Syria’s bitterly divisive politics are mostly forgotten in the dash to get to Europe.

“Syrians are disgusted by politics,” said a 24-year-old man who left Damascus last week and hopes to resume his law studies in Germany. He fought briefly with a government militia in 2013 and decided to leave Syria after he was summoned last month to join the army, part of a new, countrywide call-up of reservists that has contributed large numbers of young men from government-held areas to this latest exodus from Syria.

“I would have had to serve the regime and participate in killing civilians,” said the man, who asked to be identified only by his first name, Bashir. “Most Syrians are now convinced the war is pointless. We don’t know who is winning, and they are all just killing each other.”

Lying on a mat nearby was a group of men who had fought with the rebels and had traveled from the southern province of Daraa, the birthplace of the 2011 revolt that sparked the war that triggered the refugee crisis. Their 500-mile journey, an eight-day trek across the length of Syria and many of its front lines, guided by Bedouin smugglers, was more hazardous than any challenge they may encounter in Europe.

The first stretch took them through the government-held province of Suwayda, where the wife and six children of Abdul Kareem Mazen, traveling in a separate car, were detained by a local regime-backed militia. They were carrying the money for the journey and he is now stranded, Mazen said, without the means either to return to negotiate their release or press on to Europe.

The next stretch traversed the eastern desert provinces controlled by the Islamic State, whose fighters routinely stop the smuggler convoys, interrogate the travelers and take into custody anyone they suspect may have fought with the Free Syrian Army, as well as professionals such as doctors and lawyers, according to several of the refugees who took the route.

Those detained are sent to “repentance” camps, said Ayham Jarad, 38, who resisted threats of torture and did not admit his rebel affiliation. His friend did and was taken away.

“People don’t want to fight any more. They just want to eat,” said Abu Hamza, another former rebel who recently left Daraa and asked to be identified only by his nickname. “I sold everything I had just to get here — my fridge, my bed, everything.”

After successfully navigating government, rebel and Islamic State checkpoints, Abu Hamza and his party of nine men and three women were held up for days by Turkish guards who repeatedly turned them back. Eventually, one of the women, his brother’s wife, gave up and returned home, he said.

The others made it and now are living cheerfully under a big tree on one of the backstreets of Izmir, tracking down smugglers and negotiating their passage to Greece.