By refusing to clarify the scale of its military presence in Syria, Russia keeps the West fearing a considerable build-up to win a stronger bargaining position when world powers sit down to talks on the conflict, Western diplomats in Moscow said.

Those discussions could take place as soon as this month, when Russian President Vladimir Putin comes to the United States for the first time in some eight years, to speak at the annual United Nations General Assembly.

Russia’s central demand now is that its long-time ally, Syrian President Bashar al-Assad, should be included in international efforts to contain the militants who have called themselves Islamic State and control large tracts of Syria.

U.S. officials said on Wednesday Russia had sent two tank landing ships and additional aircraft to Syria and deployed a small number of forces there.

In Lebanon, sources said Russian forces are taking part in combat in Syria, where Assad has come under increasing pressure.

“It’s all about the General Assembly,” said one of the diplomats, who like other sources spoke on condition of anonymity.

“If there is a real new start in dialogue between Russia and the United States – we have a whole new situation, new quality.”

Moscow has signaled several times in recent weeks it is interested in a meeting between Putin and U.S. President Barack Obama in New York. The White House says it is not aware of any meeting planned at the moment.

Moscow would play up any such meeting for its domestic audiences to cast Putin as a peacemaker and an indispensable partner for Washington in tackling international crises, even at a time of high tensions over Ukraine.

“They want to push others to consider it more seriously,” said the expert, who is often critical of the Kremlin. “Or else fear that Moscow could use its forces there for other purposes.” 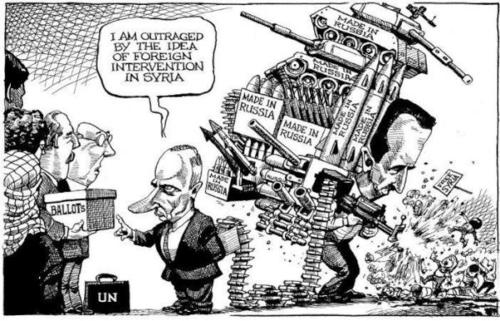 Washington expressed concern over the Russian military build-up in Syria and put pressure on countries nearby to deny their air space to Russian flights to the country.

Russia has decried the U.S. pressure over the flights as “international boorishness” and dismissed reports of a build-up in Syria in general terms.

But Russian officials have repeatedly dodged questions over whether there has been a recent increase in military assistance to Assad and Moscow has not unequivocally denied any build-up of its forces in Syria.

“First we were accused of providing arms to the so-called ‘bloody regime that was persecuting democratic activists’,” said Maria Zakharova, spokeswoman for the Russian foreign ministry.

“Now it’s a new edition – we are supposedly harming the fight against terrorism. That is complete rubbish.”

The Russian Emergencies Ministry has been sending flights to Syria several times a month throughout the conflict, saying they deliver humanitarian aid and help evacuate people.

The West fears Russia is using the flights to bring arms to Syria.

The fine line distinguishing “military experts” from trainers or troops capable of taking direct part in combat has added to Western worries.

The Russian navy has also been going back and forth to Syria recently. Russian bloggers have collated what they say are social media accounts of Russian soldiers, including marines, going to the Russian naval facility at Tartous on Syria’s Mediterranean coast.

Ivan Konovalov, a defense expert in Moscow, said problems with securing air routes for the Russian flights to Syria may be driving the increased navy activity.

Moscow has said in the past, including when the Syria conflict was already in full swing, that Tartous has long been manned by a minimal number of troops. Any build-up there would mark a major change in Russia’s strategy on the conflict.

It could both help Assad hold his power-base region and allow Russia to safeguard its interests if he were toppled.

Putin said last week it was “premature” to say Russia was ready to take part in combat operations in Syria and there was little feeling among sources in Moscow the Kremlin would go as far as sending meaningful ground forces there.

But the growing concerns have zeroed in on the Russian air force getting involved in Syria, where a U.S.-led coalition is already conducting air strikes against Islamic State.

Back in Moscow, some diplomats speculated that should Russia be able to improve its bargaining position with its moves on Syria, it could try to cut a geo-political deal in exchange for Western concessions on another conflict – Ukraine.

Others ruled out any such possibility. But the idea did not escape Russians, who shared a joke on Twitter about a Russian soldier’s worried mother who asked her son how he was doing on the front lines of Ukraine.

He replied: “Don’t worry mum, I am already in Damascus.”