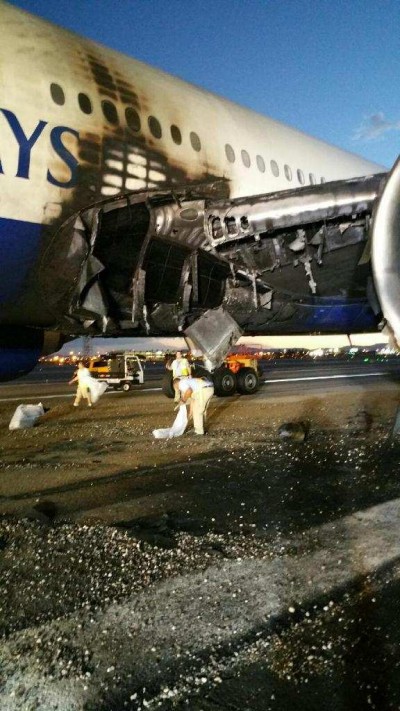 Fourteen people were taken to hospital Tuesday when a British Airways Boeing 777 suffered a major engine failure during takeoff at Las Vegas airport, starting an intense fire that triggered an emergency evacuation on the runway.

Thick clouds of black smoke billowed from the left engine of the plane as passengers used inflatable slides to escape the blaze.

The National Transportation Safety Board was sending a team to investigate the accident.

Witnesses said the fire was so intense that it melted windows on the plane, which was bound for London Gatwick.

Cockpit alarms can be heard on recordings of the pilots’ mayday call to air traffic controllers.

The Boeing 777 experienced an engine failure after being cleared for takeoff at around 4:13 p.m. (7:13 p.m. ET) at McCarran International Airport, the airport said.

“We were just about to take off,” London-based passenger Dominic Worthington told NBC News. He said smoke was seen on both sides of the plane, and then the evacuation chutes deployed.

There was a lot of smoke as passengers used the chutes, and they could see debris on the ground, Worthington said. At the bottom of the slide, passengers going down were bumping into each other amid the thick smoke, he said.

A total of 159 passengers were on board the Flight BA2276, along with three pilots and 10 cabin crew, the airline said.

Clark County Deputy Fire Chief Jon Klassen told The Associated Press that the fire didn’t appear to breach the cabin. The fire was out by 4:18 p.m., the airport said.

Worthington praised crew members who he said did a great job of communicating instructions to passengers.

“They were brilliant,” he said. “[The communication] was crystal clear.”

The fire shut down the runway until about midnight local time (3 a.m. ET) but three other runways remained in service.

Passengers were taken to area hotels.

The flight-tracking website FlightAware reported delays on departing flights of up to 45 minutes, and said incoming flights were also delayed by the fire.

Boeing Tuesday offered technical assistance to the NTSB. The plane was fitted with General Electric engines.

In a statement, British Airways said: “Our crew evacuated the aircraft safely and the fire was quickly extinguished by the emergency services at the airport. A small number of customers and our crew have been taken to hospital. All customers have been provided with hotel accommodation, and our colleagues are helping them with anything further they require.”