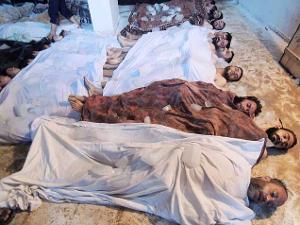 An international human rights group says on the anniversary of the deadly chemical attack outside Damascus that “justice remains elusive” for the victims and their families. (AP Photo)
Share:

Russia is delaying the launch of an international investigation aimed at assigning blame for chemical weapon attacks in Syria, U.N. Security Council diplomats said on Wednesday, though Moscow’s U.N. envoy said the holdup was for technical reasons.

In a letter to the 15-nation council last week, United Nations Secretary-General Ban Ki-moon outlined his plans for an investigation into toxic gas attacks in Syria, to be conducted by the United Nations and the Organization for the Prohibition of Chemical Weapons (OPCW).

The council was supposed to respond to Ban’s letter within five days. The deadline lapsed on Tuesday and no response has been sent.

Several council diplomats said Russia, which holds the rotating presidency of the Security Council this month, was hesitating. Asked about it at a news conference, Russian U.N. Ambassador Vitaly Churkin played down concerns about a delay.

“The most important thing is to make sure we know what is going to happen and the mechanism will work as effectively as it can,” he said.

Churkin said he had sought written clarifications from the United Nations on precisely how the investigation would proceed.

He described three areas of concern that needed written clarification, but only named one, involving voluntary contributions for financing of the investigation.

He said he had worried those voluntary contributions could be used to influence the investigation to “depart from the impartiality which we hope it will display in the course of its work.”

Western diplomats said the Russians had also raised the issue of Iraq and the possibility of expanding the U.N.-OPCW investigation’s work to include Iraqi territory, where there have been allegations of Islamic State militants using poison gas.

Churkin said this was an issue Russia was exploring with the Iraqi government.

Council diplomats said Moscow appeared to want the investigation to have a greater emphasis on alleged chemical attacks by Islamic State in Iraq and Syria.

Syria agreed to destroy its chemical weapons in 2013 in an effort to avert U.S. military strikes threatened over a sarin gas attack that killed hundreds of civilians. The OPCW has since found chlorine has been “systematically and repeatedly” used as a weapon, though it is not mandated to lay blame.