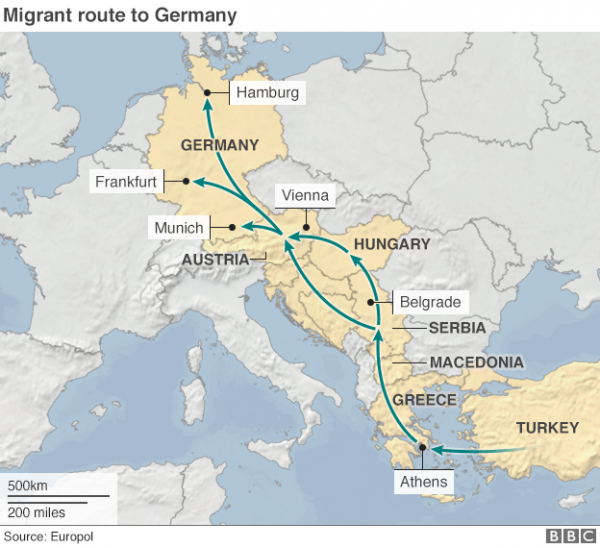 “Is this really our train? Is this the train to Germany?!” Maha screams with delight.

It is Monday evening in Vienna’s central train station and the 25-year-old Arabic teacher, carrying her one-year old son in her arms, can’t quite believe that her family’s harrowing journey from Syria may soon be over.

Maha and her husband Khalil decided to attempt the treacherous trek to Europe with two small children back in June, when Islamic State (IS) fighters entered their hometown of Kobani and began butchering people with knives.

In the span of a few hours, Khalil says, dozens of bodies were littering the streets and the family house had been ransacked. It was time to go, regardless of the risks.

“I used to have pictures of dead children from that massacre on my phone but I deleted them. I couldn’t look at them anymore,” he says.

Now Khalil, a tall, handsome English teacher, Maha, three-year-old Helan and baby Nour, are huddled on the platform in Vienna.

Their story illustrates the high hopes and crushing, often life-threatening, lows refugees face in their desperate attempts to reach Europe.

The family are among hundreds of migrants who were allowed onto trains in Budapest on Monday to cross into Austria, and then Germany.

Khalil and Maha’s goal is to make it to Hamburg in northern Germany, and then maybe on to Denmark, where Khalil’s sister lives.

They spoke at length about their journey from Syria to the heart of Europe with a Reuters reporter who accompanied them from Vienna to Passau in southern Germany.

Exhausted, scared and under-nourished, their tale mirrors those of thousands of refugees from Syria, Iraq, Afghanistan and other war-torn countries who have left their homes with little more than the clothes on their back in the hope of finding a better life.

But until they reach their final destination, knowing next to nothing of their official status in Europe, they can’t shake the fear that something could go horribly wrong — as it has for thousands who have died trying to cross the Mediterranean or at the hands of ruthless people traffickers.

As Khalil and Maha tell it, they crossed into Turkey 25 days ago, a number Maha keeps repeating, having religiously counted every night of their flight.

From there, they made their way to Bodrum on Turkey’s western coast, roaming through the woods until they found a smuggler with an inflatable boat.

Maha says the boat was meant to carry four people, but the smuggler packed the entire family and seven others on board. Several hundred meters off the coast, water began entering the boat and the group almost drowned, before turning around and making it back to land.

From there, they traveled north to Izmir to find a better way across the Aegean Sea, using money given to Khalil by his family to pay the 3,600 euro fee — 1,200 euros per adult and 600 per child — for transport to Mitilini on the island of Lesbos.

After two days on Lesbos, they reached the Greek mainland. Using smugglers, they then navigated the woods of Macedonia and Serbia and ended up in a camp just across the border in Hungary.

“We saw one man try to escape by climbing a fence,” said Maha. “They searched for him with planes and the police beat him when they caught him. I saw him bleed.”

There are dozens of Syrians on the train. One man who looks on the brink of exhaustion fears his brother may be among the 71 found dead in a refrigeration truck last week on an Austrian motorway. “It’s very difficult, very difficult,” he says.

Khalil and Maha are Kurds and proud of their heritage. A year ago, they say, they tried to escape the fighting in northern Syria by moving to Erbil in the autonomous Kurdistan region of Iraq. But they found it too expensive and were forced to return to Kobani.

Khalil takes pride in how the Kurds fought back IS militants there. He shows pictures on his phone of Kurdish women fighters, proof he says that Kurds are more like Westerners than Arabs.

As the train pulls into St. Poelten station in Austria, activists are waiting on the platform holding up banners of support for the refugees. But Maha is scared.

“Is this a protest against us?” she asks.

Gesturing wildly, they insist she get up. They have paid to use the bike racks and say they don’t care where the family comes from or how tired they are.

Minutes later, police with bullet-proof vests enter the train, waking up the refugees with flashlights and forcing them to disembark.

The glimmer of hope that Maha felt on the platform in Vienna hours earlier suddenly fades as they are herded into an open hangar area for assessing their nationalities. The sound of crying children resonates in the night air.

Tears in his eyes, Khalil worries that they will not be allowed to continue to Hamburg, and then on to his sister.

“What’s the name of this place?” Maha asks nervously. She has never heard of Passau.