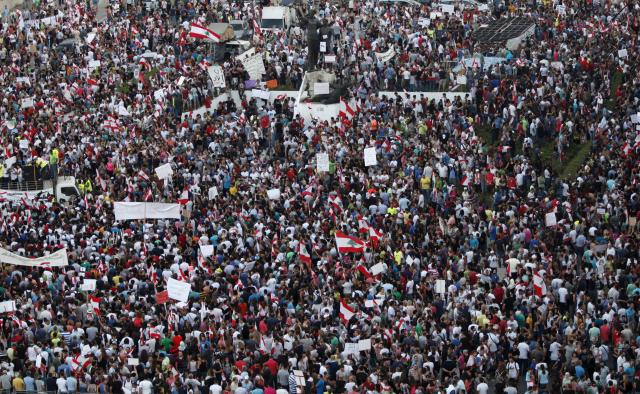 People carry Lebanese national flags and banners as they take part in the largest anti-government protest yet sparked by the garbage crisis at Martyrs’ Square in downtown Beirut, Lebanon August 29, 2015. REUTERS/Jamal Saidi
Share:

Beirut, Lebanon— Thousands rallied in downtown Beirut Saturday in the largest anti-government protest yet over a summer garbage crisis, chanting “revolution, revolution” and setting a three-day ultimatum for authorities to respond to demands, including the resignation of a Cabinet minister.

It signaled the most significant public outburst of anger against a dysfunctional system of government, but demonstrators have yet to chart a clear path toward change.

The government’s failure to resolve the trash crisis has evolved into wider protests against a political class that has dominated Lebanon since the end of the country’s civil war in 1990 and a government that has failed to provide even basic services to its people. Protesters filled up the square known as Martyrs’ Square, shouting anti-government slogans in a peaceful, carnival-like atmosphere.


“Today is a step on a long road,” said Fares Shoufani, a 48-year-old contractor. “We are depending on this movement. The more it advances forcefully, the more the people join. ”

The main group behind the protests is an activist group that calls itself “You Stink,” a catchy slogan playing off the garbage crisis that addresses Lebanese politicians. The group has attracted across the board support from ordinary Lebanese fed up with the system, and angered at the festering, uncollected garbage piling up near their homes.

In a speech before thousands of protesters in Beirut, “You Stink” representative Rasha Halabi gave the government 72 hours to respond to its demands, threatening to escalate protests by Tuesday evening if it doesn’t.

The group called for the resignation of the Lebanese environment minister and for the interior minister to be held accountable for police brutality against protesters last weekend. It also demanded an end to the garbage crisis. In longer term goals, the group called for new parliament elections and the election of a president to fill a post that has remained vacant for more than a year due to political squabbling.
“We are still in the beginning,” Halabi said to widespread cheers from the crowd.

The huge protest crowds were reminiscent of the massive rallies that took place in that same square in 2005, following the assassination of the late Prime Minister Rafik Hariri. Those protests, which united hundreds of thousands of Lebanese from all sects for a while, were focused against Syrian troops in Lebanon and their Lebanese allies, and succeeded in pressuring Damascus to pull out its troops following a decades-old presence.
The current protest movement is a rare instance of Lebanese mobilizing without backing from any political parties. Those who turned up Saturday where largely drawn from Lebanon’s middle class and across religious sects. A mix of civil society groups, activists and leftist groups took part, along with thousands of disgruntled Lebanese.

The groups consist of a variety of views and programs seeking different agendas, each with a specific demand. Many say they seek radical reforms including an end the patronage system that divvies up power among Lebanon’s multiple communities — Shiites, Sunnis, Christians, Druze and more. That system has been the center of Lebanese politics for decades and helped fuel the 15-year civil war. Others are looking for more modest goals, such as an end to water and electricity cuts.

Together they’re charting a comprehensive vision. One placard held at the protest read: “Go Home, You Have Failed in Everything!” with mug shots of Lebanese politicians on it.

It is not clear, however, whether the protesters, who are up against an entrenched political class for which there is no clear alternative, will be able to keep momentum and achieve results.

Mona Awali, a 30-year-old teacher from south Lebanon, said she doesn’t expect politicians to yield to the ultimatum issued, but said that would only increase the resolve of protesters. She said was impressed by the young, independent crowd that turned up.

“This is what we wanted. This is the public we want to reach,” she said.

Two protests last weekend outside the prime minister’s office drew up to 20,000 people and were generally peaceful. But the rallies turned violent when security forces used batons, tear gas and water cannons to disperse groups of people who tried to break the security cordon around the prime minister’s office. There was no official estimate for Saturday’s crowd, which appeared to be significantly larger.

To avoid friction with security forces, organizers of the protest shifted the location from Riyad Solh square opposite the government building known as the Grand Serail to Martyr’s Square, a major square a few hundred meters away. As night fell, a small group of protesters returned to Riyad Solh, pelting plastic bottles and fire crackers at security forces. A small group of masked youth repeatedly tried to break through the barbed wire.

“It is turning into — I won’t say revolution — but kind of an uprising. It would be great if we win on the rubbish issue because this will cause the beads to come undone,” said Alex Paulikevitch, a 33-year-old choreographer and protester.

Paulikevitch said he doesn’t think the protests will bring down the system, “but if we get one demand to solve the rubbish problem it will be great.”