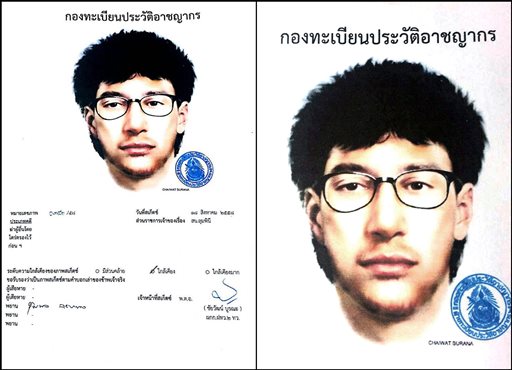 This combination of images released by the Royal Thai Police on Wednesday, Aug. 19, 2015, shows a detailed sketch of the a suspect in a bombing that killed a number of people at the Erawan shrine in downtown Bangkok, on Monday. Thailand’s national police chief said Wednesday that a deadly bombing at a central Bangkok shrine was carried out by “a network,” as investigators focused on a man seen in a grainy security video leaving a backpack behind just 20 minutes before the explosion. The message above the sketch says “Criminal record registration department.” (Royal Thai Police via AP)
Share:
Police in Thailand issued an arrest warrant on Wednesday for an “unidentified foreign man” shown in a security video leaving behind a backpack just minutes before a deadly bombing at a Bangkok shrine, but acknowledged they’re not sure he’s from another country.

Police also released a sketch of the suspect and offered a 1 million baht ($28,000) reward for help leading to the arrest of the man they believe carried out Monday’s bombing, which left 20 people dead and more than 120 injured. Authorities have called it the worst attack in Thai history.

But apart from the rough portrait that shows a young man with dark, bushy hair and eyeglasses, authorities have few solid leads.

National police spokesman Lt. Gen. Prawut Thavornsiri expressed uncertainty at a news conference about the man’s origin. He said the suspect “looks like a foreigner” but “might have been in a disguise and wearing a fake nose” to conceal his identity.

Prawut said the security video appears to show two possible accomplices standing in front of the man who are also considered suspects.

“He didn’t do it alone, for sure. It’s a network,” national police chief Somyot Poompanmoung told the same news conference, adding, “I believe there are some Thais involved.”

Two days after the attack, the open-air Erawan Shrine reopened to the public. No one has claimed responsibility for the blast at one of the capital’s busiest intersections during evening rush hour.

Authorities identified the suspect from a grainy security video that shows the man, wearing a yellow T-shirt and carrying a black backpack at the crowded shrine. He sits down on a bench, takes off the backpack and leaves it behind as he stands up and then walks away. Time stamps on the video show he left the shrine 15 minutes before the explosion, which struck just before 7 p.m.

“If citizens or anyone can give us information or clues that lead to the arrest of this man, I have set a reward of 1 million baht,” Somyot said.

Police composed the sketch based on the video and a description provided by a motorcycle taxi driver believed to have given him a ride on Monday night.

The attack has raised concerns about safety in a city that draws millions of tourists.

Prime Minister Prayuth Chan-ocha “is worried about the security of people and tourists in Thailand,” the police chief said.

Prayuth has called the attack “the worst incident that has ever happened in Thailand” and vowed to track down those responsible.

The Erawan Shrine is a revered spot among Thais and tourists that transcends religion. It is dedicated to the Hindu god Brahma, but is extremely popular among Thailand’s Buddhists as well as Chinese tourists.

Although Thailand is predominantly Buddhist, Hinduism has an influence on its religious practices and language. The shrine’s location adds to its popularity, offering an open-air place for prayer amid the capital’s gleaming shopping malls and five-star hotels.

On Wednesday morning, a stream of people arrived at the shrine, kneeling in prayer, lighting incense and placing flowers at the site where 36 hours earlier the explosion scattered body parts across one of the capital’s busiest intersections. Buddhist monks in saffron robes joined members of the public to chant prayers.

Among those who paid respects was an office worker, Nuansupha Sarunsikarin, who expressed shock and sadness over the attack.

“I’m depressed for those innocent people who had to pay for something they’re not involved with and now have no chance to live their lives,” Nuansupha said.

Thai authorities identified six victims as Thai and four as Malaysians, along with four Chinese, two people from Hong Kong including one British citizen, one Indonesian and one Singaporean. Two victims remain unidentified.

Bangkok was rattled by a second blast Tuesday at a popular ferry pier which exploded in the Chao Phraya River and caused no injuries. Prawut said the explosion at the Sathorn Pier frequented by river ferries and tourist boats also was caused by a pipe bomb and could be related to the shrine attack. Security video showed a sudden blast of water over a walkway at the pier as bystanders ran for safety.

Thailand has seen many violent attacks in recent years, particularly in a more-than-decade-long insurgency by Muslim separatists that has killed over 5,000 in the country’s south. Those attacks have never reached the capital, however.

Bangkok has seen politically charged violence in the past decade; the deadliest, in 2010, killed more than 90 over two months and was centered on the same intersection where Monday’s bomb went off. But none of those attacks included a bomb that seemed intended to produce mass casualties.