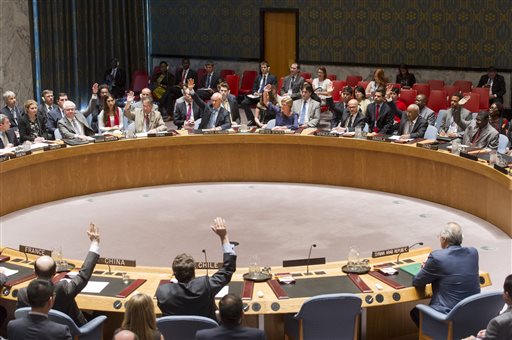 The U.N. Security Council unanimously adopted a resolution Friday aimed at identifying those responsible for using chlorine and other chemical weapons in attacks in Syria that have killed and injured a growing number of civilians over the past two years.

The resolution, negotiated primarily by the United States and Russia, establishes an international investigative body that would assign blame for any chemical weapons attacks during the Syrian conflict, now in its fifth year, so that the perpetrators can be brought to justice.

A chemical weapon attack on a Damascus suburb killed hundreds of civilians on Aug. 21, 2013 and led the Security Council to demand the destruction of Syria’s chemical weapons and the equipment used to produce them. But there have been numerous reports of continuing use of chemicals as weapons in Syria since then, especially chlorine-filled barrel bombs.

But the United States and other Western nations contend Syria’s government is to blame, especially for barrel bombs and other toxic agents dropped by helicopters, since the opposition doesn’t have aircraft.

“Pointing a finger matters,” U.S. Ambassador Samantha Power told the council. “This sends a clear and powerful message to all those involved in chemical weapons attacks in Syria that the (new investigative body) will identify you if you gas people.”

But she added that prosecuting perpetrators will take time because there is still no tribunal to investigate alleged crimes during the war in Syria, which has killed at least 250,000 people since it began in March 2011, according to the United Nations.

While Russia and the United States have failed to agree on a way to end the Syrian conflict, they have agreed on eliminating the country’s chemical weapons. Friday’s vote came just two days after U.S. Secretary of State John Kerry and Russian Foreign Minister Sergey Lavrov reached agreement on the final text of the resolution.

Power called for the unity that the council showed Friday “to urgently find a political solution to the Syrian crisis.”

The Organization for the Prohibition of Chemical Weapons, the global chemical weapons watchdog, has a mandate to carry out fact-finding missions to determine whether chemical attacks occurred in Syria. But neither the organization nor the United Nations has a mandate to determine responsibility. The resolution asks U.N. Secretary-General Ban Ki-moon, in coordination with OPCW, to work to establish a joint investigative mechanism that would have the power to identify the perpetrators.
Russia’s U.N. Ambassador Vitaly Churkin said Friday’s decision also aims to prevent the use of chemical weapons in Syria in the future and expressed hope that the joint investigative body “will work impartially, objectively and professionally.”

In March, the council approved a U.S.-drafted resolution that threatens measures, including sanctions, over the use of toxic chemicals as weapons in Syria.

The U.S. sponsored an informal Security Council meeting in April for council members to hear firsthand accounts of chemical weapons attacks. In early June, Syrian activists and doctors said chlorine had been increasingly used as a weapon. And in mid-July reports emerged that the Islamic State group, which controls about a third of Syria and Iraq, used projectile-delivered poison gas against Kurdish forces in both countries on several occasions in June.

Syria’s declared stockpile of 1,300 metric tons of chemicals has been destroyed, but the OPCW is investigating possible undeclared chemical weapons.

Chlorine is not officially considered a warfare agent and was not among the chemicals declared by Syria, but its use as a weapon is illegal.