U.S. launches armed flights over Syria from Turkish base for first time 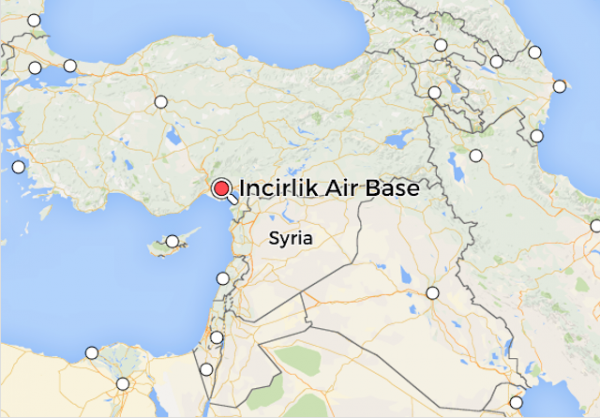 Incirlik air base in southern Turkey
Share:
By Missy Ryan

The U.S. military has begun flying armed aircraft over Syria from Turkey, the Pentagon said Monday, a move that could expand its ability to carry out airstrikes to protect U.S.-trained rebels in northern Syria.

Capt. Jeff Davis, a Pentagon spokesman, said that military officials had launched armed drones from Incirlik air base in southern Turkey over the weekend. Previously, Ankara had permitted the United States to use the base only to conduct surveillance flights over Syria.

“At this point, no actual strikes have been conducted, but they have begun flying armed,” Davis told reporters at the Pentagon. He said U.S. pilots would begin armed flights over Syria from the base as well.

A U.S. military official, speaking on the condition of anonymity to discuss operational planning, said the new flights from Incirlik, not far from northwest Syria, would increase the time that American aircraft could spend in Syrian airspace, collecting intelligence or dropping munitions.

“It’s proximity and it’s on-station duration, and it’s ability to respond in a timely manner,” the official said.

Last month’s agreement to expand U.S. operations out of the base is just one element of expanded U.S.-Turkish cooperation against the Islamic State, the extremist group that controls much of Iraq and Syria and that Ankara increasingly sees as a direct threat.

The two countries have also agreed to establish a de facto safe zone in northern Syria, which is intended to provide Turkey with a buffer from Syria’s civil war and create an area for displaced Syrians to take shelter from the brutal extremist group.

The Obama administration’s plans for standing up a new force to fight the Islamic State in Syria were dealt a blow last week when al-Qaeda’s Syrian affiliate, Jabhat al-Nusra, claimed to have captured the leader of Division 30, an opposition unit that has sent some of its members to Turkey to be trained by U.S. forces.

On Friday, U.S. aircraft took the unusual step of conducting strikes against fighters from Jabhat al-Nusra, which had reportedly attacked the U.S.-backed unit. The strikes signaled a shift in policy for the Obama administration, which had resisted committing to using air power to protect the U.S. trainees, known as the New Syrian Force, from anyone other than the Islamic State.

Over the weekend, military officials said the new authorization extended to the use of American aircraft to shield fighters from attacks by the forces of Syrian President Bashar al-Assad, which have used chemical weapons and barrel bombs against opponents. The move marks a potential escalation for the United States four years into the Syrian conflict, creating the prospect of a direct U.S. engagement with Assad’s forces.

The authorization against Assad forces was first reported by the Wall Street Journal.

Military officials played down that scenario Monday, saying that a confrontation with Assad’s units is unlikely in large part because the United States has sent members of the New Syrian Force — who number only about 55 so far — into areas not contested by the government.

“It’s important to remember that’s not what this is about,” Davis said. “We’re not at war with the Assad regime. The people who we are training and equipping are pledged to fight ISIL and only ISIL.” ISIL is another name for the Islamic State.

U.S. officials also believe that Assad’s power to strike out against U.S.-backed fighters is diminished. Assad recently made a rare public admission that his government had lost ground and was struggling to maintain a large enough force to hold off adversaries.

The recent attacks by Jabhat al-Nusra underscore the vulnerability of U.S.-trained forces in Syria and highlight the obstacles that military officials must overcome if the program, which began training cadets after a long buildup this spring, can succeed.

“Train and equip as currently construed is going to have a very, very difficult time meeting any of its objectives in terms of manpower,” said Fred Hof, a former U.S. official who is a senior fellow at the Atlantic Council.

Part of the reason that the number of trainees has been so low is that the United States has struggled to find Syrians, after four years of bloody battles, who will agree to fight only the Islamic State and not the Assad regime.

Military officials are pushing forward with the program, which aims to eventually establish training sites in Jordan, Saudi Arabia and Qatar.

More Syrians are being trained. Defense officials have declined to specify the size of the next cohort but concede it is not large. They say the intense vetting that has suppressed numbers is necessary to avoid arming the wrong people.

Hof said the program could have negligible impact unless it changes course.

“It could be that when we look at this . . . we may see it was absolutely the emptiest of gestures,” Hof said. “If it continues in its present form, that’s exactly the conclusion we’re going to reach.”