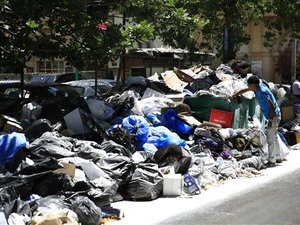 Residents of the town of Chhim Iqlim al-Kharroub district of the Shouf region blocked a vital road on Monday to protest the accumulation of garbage on the streets, as the entire country continued to reel from an unprecedented waste management crisis.

“A large group of residents blocked the main market’s road at 8:00 pm with the accumulating trash, in protest at the municipality’s failure to collect the garbage,” National News Agency reported.

It said the move “created a severe traffic jam, since the blocked road is vital for the Iqlim al-Kharroub region.”

Young men and residents also blocked the road at the town’s main entrance to protest the piling up of the garbage.

The roads were eventually reopened “after intensive contacts and efforts with the protesters,” NNA said, without elaborating on the identities of the mediators.

The growing garbage crisis erupted after the closure of the Naameh landfill on July 17.

The crisis has seen streets overflowing with waste and the air filled with the smell of rotting garbage for around two weeks. Residents have taken to the streets in areas across Lebanon to protest authorities’ failure to tackle the problem.

Experts have urged the government to devise a comprehensive waste management solution that would include more recycling and composting to reduce the amount of trash going into landfills.

But so far there has been no evidence of such a plan, and there is already opposition to temporary solutions proposed by the government.

Health Minister Wael Abou Faour highlighted on Monday the threats posed by the ongoing waste disposal problem in Lebanon, saying that the temporary dumps for Beirut’s garbage are nearing their capacity.

He urged during a press conference the government to “take the fastest solution to resolve the problem because time is not on our side.”

The cabinet has been studying the possibility of exporting the waste.

“It appears that we are facing a long-term problem over waste disposal,” he remarked.

He noted that the temporary dump established near Rafik Hariri International Airport poses a threat to nearby residential areas due to the hazardous fumes and stench.

It also poses a threat to aviation because of the increase in birds that are dangerous to planes, he explained.

The other dump for Beirut waste, said Abou Faour, is located in the Karantina area near a flour mill.

He warned that the mill will be exposed to the hazards of the garbage, such as rodents and other pests, which in turn will affect flour production and consequently create a bread shortage in the country.

Given these challenges, he called on the cabinet to reach an agreement on exporting the waste.

Until such an agreement is reached, the minister urged the people to exercise precautions and avoid burning the trash.

“Such a measure is a greater danger to the environment and will not influence the cabinet,” noted Abou Faour.

Burning the waste raises cancer, asthma, breathing risks, and other hazards, he warned.

In addition, the minister advised people against spraying pesticides on the garbage because, in the long-run, the pests will develop immunity against them.

The minister therefore urged them to continue on using the calcium powder at dump sites, saying it is the most effective.

Addressing reports of the possible spread of cholera due to the waste crisis, he explained that such threats existed before the problem began and that most cases were detected from travelers at the airport.

“These cases have been contained,” he reassured.

Moreover, he said that cholera can only be spread from one person to another and it is a virus that is linked to personal hygiene.

“The Health Ministry does not have a solution to the garbage crisis, but it has means to confront it,” he declared in conclusion.

“The political powers hold the solution to the crisis,” he stressed.

The smell of rotting garbage is getting worse with rising temperatures amid an unprecedented heat wave striking Lebanon and neighboring countries.

Officials have started to study the possibility of exporting the waste to Germany (possible other EU countries) at an extremely high cost of about $100 /metric . Germany uses the trash to generate electricity a commodity that is in short supply in Lebanon where power blackouts are daily affairs .

The piles of garbage serve as an uncomfortable reminder of a larger Lebanese political failure. The country has for many years faced nationwide infrastructure problems, including water shortage in addition to daily electricity cuts.

“We have come to realize that a mafia is controlling Lebanon and its funds”, Phalange party leader MP Sami Gemayel said after party’s weekly meeting last week.