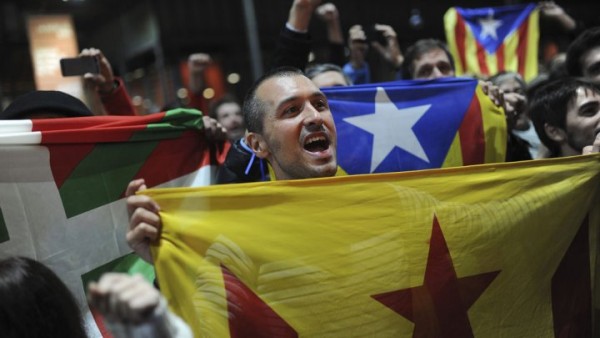 Catalan separatist campaigners defied Madrid and staged a symbolic vote on independence last November, AFP photo
Share:
Catalonia on Monday called early regional elections for September 27, polls that will serve as a proxy vote on independence from Spain and likely raise tensions with the central government in Madrid.

Catalan President Artur Mas, who has taken up the secession cause in recent years amid a surge in popular support, formally called the poll for September 27, shortly before a Spanish general election due by year-end.

The vote to elect a parliament in the wealthy northeastern region, a year earlier than necessary, ratchets up pressure on centre-right Spanish Prime Minister Mariano Rajoy, who has ruled out Catalan independence.

It also forces the issue to the forefront of the national campaigns.

“We all know these elections will be very different,” Mas said in a television address, after signing a decree to dissolve parliament and setting the long-flagged election in motion. “Politically they are a plebiscite on Catalan freedom and sovereignty.”

Separatist leaders have said in recent weeks that a victory for them in the election would launch a “roadmap” to Catalan independence within 18 months, although they have not said how they would overcome the staunch opposition from Madrid.

Spain’s Deputy Prime Minister Soraya Saenz de Santamaria told a news conference earlier on Monday that the government could legally challenge the decision to call the polls if Mas did not respect the law.

It has blocked attempts to hold a referendum on independence in the courts before.

Catalan separatist campaigners defied Madrid and staged a symbolic vote on independence last November, but the outcome was mixed.

About 80 percent of the 2.2 million people who voted backed secession, but the turnout was little more than 40 percent.

Polls suggest that some of the steam may have come out of the pro-independence campaign since then, with voters focusing on social and economic issues as the country emerges from recession.

The main Catalan parties supporting a split from Spain, including Mas’ centre-right Convergencia Democratica de Catalunya (CDC), have agreed to present a joint list of candidates to avoid splintering the pro-independence vote.

Hundreds of thousands of people filled the streets of Barcelona on September 11, 2014, calling for the right to vote on a potential split from Spain – a cause supported by a majority in the region, even those who oppose independence.

Their fervour was boosted by Scotland’s 2014 referendum on independence from Britain, even though it ended in a ‘no’ vote.