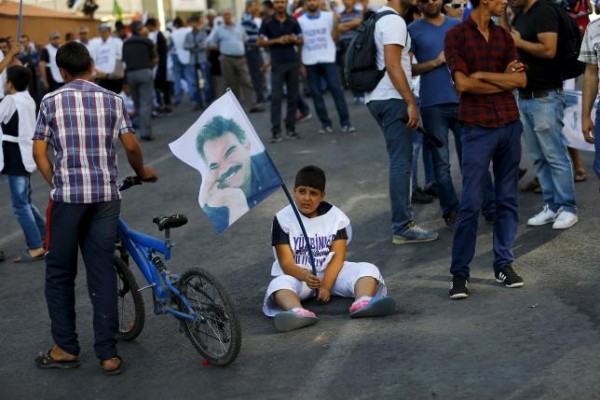 A demonstrator holds a portrait of Kurdistan Workers Party (PKK)’s jailed leader Abdullah Ocalan during a march in solidarity with him in Diyarbakir, Turkey, August 1, 2015. REUTERS/Umit Bektas
Share:

Two Turkish soldiers were killed and 24 were wounded early Sunday in a suicide bombing blamed on militants of the outlawed Kurdistan Workers Party (PKK) that ripped through their local headquarters in eastern Turkey, reports said.

A suicide bomber drove a tractor laden with explosives up to the military station in the Dogubayazit district of the eastern Agri province, the official Anatolia news agency reported, quoting the local governor’s office.

The soldiers were deployed with the local Jandarma (Gendarmerie), a branch of the army which looks after internal security in Turkey.

The attack was blamed on the PKK, which has stepped up attacks against the security forces in the last days as Turkish warplanes bomb its positions in northern Iraq.

In a separate incident also blamed on the PKK, one Turkish soldier was killed and four wounded early Sunday when a mine exploded as their convoy was travelling on a road in the Midyat district of the Mardin province in southeastern Turkey, Anatolia said.

The PKK’s insurgency for greater rights and powers for Turkey’s Kurdish minority has claimed tens of thousands of lives since it began more than 30 years ago. The current fighting has left a 2013 ceasefire in tatters.

According to an AFP toll, at least 17 members of the security forces have now been killed in attacks blamed on the PKK since the current crisis erupted last week.

The attack in Agri province is believed to be the first time the PKK is accused of deploying a suicide bomber in the current phase of the conflict, although it has used the tactic repeatedly in the past.

Ten suspected members of the PKK have also lost their lives in clashes during the current surge in tensions, according to Anatolia.

Barzani asks PKK to quit Iraq
In a related development Iraq’s Kurdish regional government called on the Kurdistan Worker’s Party to “withdraw” from Iraq’s Kurdish territory Saturday to prevent civilian deaths amid a campaign of Turkish airstrikes targeting the group.

A statement from the office of Kurdish President Massoud Barzani said the Kurdistan Workers’ Party, known as the PKK, “should withdraw its fighters from the Kurdish region so to ensure the civilians of Kurdistan don’t become victim of that fighting and conflict.”

The statement also condemned Turkey for bombing civilians, following reports that civilian homes were damaged in airstrikes in northwestern Iraq. The statement calls on both sides to resume peace talks.

“We condemn the bombing, which led to the martyrdom of the citizens of the Kurdish region, and we call on Turkey to not to repeat the bombing of civilians,” the statement added, and called upon both sides to resume a Kurdish peace process.

The statement also called on PKK rebels to move out of the region to prevent civilian casualties. “The PKK must keep the battlefield away from the Kurdistan region in order for civilians not to become victims of this war,” it said.

In an interview with the AFP, Kifah Mahmud, a Barzani adviser, noted that “if the PKK did not have bases inside the region, Turkey would not be bombing civilians.”

Tensions between Barzani’s Kurdish Democratic Party and the PKK of Abdullah Ocalan in Turkey date back decades. The two groups were opponents in a 1990s civil war, which ended in an accord that allowed PKK fighters to remain in Iraqi Kurdish territory. The U.S. State Department and the Turkish government regard the PKK as a terrorist organization because of its history of violence in Turkey.

Turkey launched airstrikes on Kurdish rebel camps in northern Iraq last week, its first such strikes since a peace process with the PKK was launched in 2012. The airstrikes began as the U.S. and Turkey announced the outlines of a deal to help push the Islamic State group back from a strip of territory it controls along the Syrian-Turkish border, replacing it with more-moderate rebels backed by Washington and Ankara.

The heaviest air strikes were on Thursday, when 80 Turkish aircraft hit 100 targets of the PKK, according to Turkish news agency Anatolia.

Without citing its sources, Anatolia said that among those wounded was Nurettin Demirtas, the brother of the leader of pro-Kurdish Peoples’ Democratic Party (HDP), Selahattin Demirtas.

The charismatic, young Demirtas led the HDP to a historic electoral victory in June, which saw the pro-Kurdish party cross the 10 percent vote threshold to enter parliament for the first time. Demirtas is widely viewed as the biggest political threat to Turkish President Recep Tayyip Erdogan ahead of likely early elections following the ruling AKP party’s inability to form a coalition government. The Turkish president frequently accuses the HDP of supporting the PKK, an accusation the party denies.