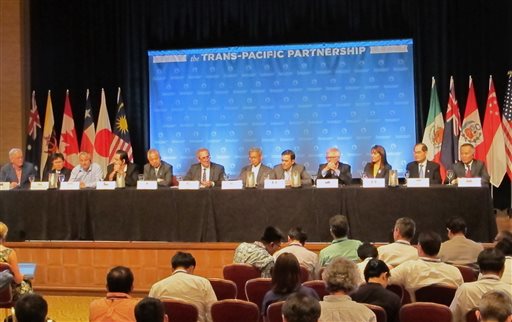 Froman, reading from a statement on behalf of all of the ministers, said the parties made significant progress and agreed to continue their discussions.

The countries haven’t yet set a date for future talks. Froman said some issues were bilateral in nature, and some will involve groups.

“I feel very gratified about the progress that’s been made and I am confident that through our continued intensive engagement that we’ll be able to tackle the remaining issues successfully,” Froman said in response to a reporter’s question about whether he was disappointed about the lack of a deal.

Japan’s economic and fiscal policy minister, Akira Amari, said he thought a deal would be reached with one more meeting.

The Trans-Pacific Partnership negotiations are aimed at erasing most tariffs and other barriers to trade and investment among participants. It would also clarify and standardize trade rules, making it easier for companies to sell goods and services in the Pacific Rim.

The wide-ranging discussions have addressed tariffs on autos, rice and dairy products, as well as intellectual property protections for pharmaceuticals.

The talks have also covered establishing environmental protections for participant nations, which range from developing countries such as Vietnam to industrial powers such as Japan.

The proposed deal is a central element of Obama’s efforts to boost U.S. influence in Asia and to serve as an economic counterweight to China.
Critics have complained that the deal is being negotiated in secret and that it favors multinational corporations over workers and consumers.

New Zealand Trade Minister Tim Groser said to reach a complicated trade agreement, parties must slowly resolve issues one by one until only one or two of the most difficult questions remain. He said dairy — of which New Zealand is a major exporter — is one of these difficult issues.

Groser didn’t provide details, in an effort to avoid causing problems for his negotiating partners, but said the countries have agreed to what he called “commercially meaningful access.” The definition of what that means is being negotiated, he said.

“I’m extremely confident that we will find that sweet spot and advance the interests of efficient dairy exporters around the world, not just mine, and yet find a way of dealing with the political complexities for those of our friends around the table who are less competitive,” Groser said.

Asked how the countries could address falling expectations for a deal, Amari said they should quickly reach an agreement.
He argued a pact by the 12 nations would become the standard for the Asia-Pacific region.

“There are countries already waiting to join. Their numbers will grow. With the World Trade Organization stuck, TPP may become the standard for the world,”Amari said.

The ministers held their latest round of negotiations at a hotel on Maui’s Kaanapali Beach for four days this week.

The U.S. came to Maui strengthened by the Obama administration’s successful legislative fight winning fast-track negotiating authority. This allows Congress to approve or reject trade agreements, but not change or delay them.

The agreement was proposed by Chile, New Zealand and Singapore in 2002, but Washington has taken the lead in promoting it since joining the talks in 2008.

China, the world’s second largest economy after the U.S., is not part of the talks. But there’s potential it could join the pact later.

Beijing has been negotiating a separate agreement with many of the same nations that’s called the Regional Comprehensive Economic Partnership. This pact would cover 16 countries, including the 10 members of the Association of Southeast Asian Nations as well as Australia, India, Japan, South Korea and New Zealand.