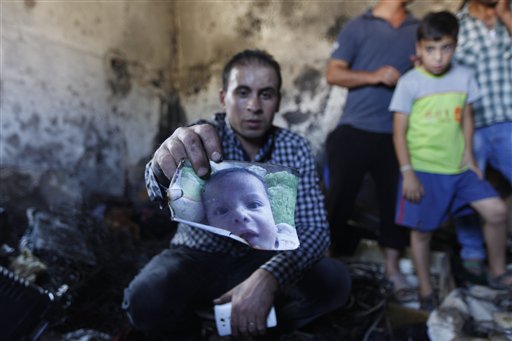 A relative holds up a photo of a one-and-a-half year old boy, Ali Dawabsheh, in a house that had been torched in a suspected attack by Jewish settlers in Duma village near the West Bank city of Nablus, Friday, July 31, 2015. The boy died in the fire, his four-year-old brother and parents were wounded, according to a Palestinian official from the Nablus area. (AP Photo/Majdi Mohammed)
Share:
Suspected Jewish assailants set fire to a West Bank home on Friday and burned a sleeping Palestinian toddler to death in an attack that drew Palestinian rage and widespread Israeli condemnation. The attack, which threatens to set off another violent escalation, shines a light on the growing lawlessness of extremist Jewish settlers that Israel is either unable or unwilling to contain.

The extremists have for years staged attacks against Palestinian property, as well as mosques, churches, dovish Israeli groups and even Israeli military bases. The attacks, known as “price tags” because they exact a price for Israeli steps seen as favorable to the Palestinians, have stirred fear in Palestinians and frustration among critics who say Israel has not done enough to quell the assaults.

Friday’s deadly attack comes as part of a larger trend of Jewish radicalization — one day after an anti-gay ultra-Orthodox extremist stabbed revelers at Jerusalem’s Gay Pride Parade and two days after Israeli authorities indicted two young Jewish activists for an arson attack on a famous Holy Land church. All have been strongly condemned across the Israeli political spectrum, though the recent spate of attacks has raised fears that a radicalized and violent ultraconservative fringe is growing from within the country’s hard-line national-religious camp.

Palestinian President Mahmoud Abbas called the attack a “war crime” and said the Palestinians would present it to the International Criminal Court as part of their case against Israel.

The extremist attacks, which most recently struck a famous church in northern Israel, have rarely caused fatal injuries, which made Friday’s incident, in which 18-month-old Ali Dawabsheh was killed and his parents and 4-year-old brother critically wounded, all the more worrying.

Witnesses and the Israeli military said that under cover of darkness, the attackers broke the windows of the family’s home in Duma, a small village near the West Bank city of Nablus. They lobbed a fire bomb into the sleeping family’s bedroom which exploded into a fireball that quickly consumed the home.

The suspects, who fled the scene, scribbled graffiti on the walls reading “Long live the Messiah,” “revenge” and “price tag,” as well as a Jewish star of David. The military said they were searching for the assailants.

Riham Dawabsheh, the boy’s mother, ran out of the house as she was engulfed by flames and a neighbor, Mohammed Ibrahim Dawabsheh, said he covered her in a sheet to try to extinguish the flames. She, as well as her husband Saed and son Ahmad, were taken to an Israeli hospital for treatment, where they remained in critical condition with severe burn wounds.

“We have no protection,” said Abdel Haleem Dawabsheh, a teacher from Duma, who like Mohammed Dawabsheh is a member of the same clan as the victims. “Settlers burned mosques, cars, trees, attacked people in our village and in the nearby villages but nothing happened to them.”

Israel says it does its best to track down the assailants and has launched recent drives to crack down on the “price tag” phenomenon. In the case of the Church of the Multiplication of the Loaves and Fishes arson in June, it arrested two suspects that belonged to an extremist settler youth group.

But critics say Israel doesn’t enforce the law when it comes to settlers because of the political power that the settlers wield in parliament and because they are still perceived in some circles as Zionist pioneers who are settling the land like the vanguards who established the Jewish state.

“This policy creates impunity for hate crimes, and encourages assailants to continue, leading to this morning’s horrific result,” Israeli rights group B’Tselem said in a statement.

The group said that in the past three years, Israeli civilians set fire to nine Palestinian homes in the West Bank and flung a fire bomb at a Palestinian taxi. It said no one was charged in any of the cases.

U.N. Secretary-General Ban Ki-moon said “continued failures to effectively address impunity for repeated acts of settler violence have led to another horrific incident involving the death of an innocent life,” his spokesman told reporters. “This must end.”

Israeli leaders rushed to condemn Friday’s attack, although B’Tselem said those words were mere rhetoric if the attacks were allowed to continue.

“I am shocked over this reprehensible and horrific act. This is a terror attack in every respect. The state of Israel takes a strong line against terrorism regardless of who the perpetrators are,” said Israeli Prime Minister Benjamin Netanyahu.

Defense Minister Moshe Yaalon, said Israel would not allow “Jewish terrorists” to carry out such acts. “We will fight against them firmly and with all means and tools at our disposal,” he said. Settler leaders and their representatives in parliament also distanced themselves from the attackers.

Condemnations also came from abroad, including the European Union, which called for “zero tolerance” for settler violence, while Stephane Dujarric, the spokesman for U.N. Secretary General Ban Ki-moon, called for the perpetrators to be “promptly brought to justice.” The U.S. State Department urged both sides to “maintain calm and avoid escalating tensions.”

The U.N. Security Council condemned “the vicious terrorist attack,” demanded that the perpetrators be brought to justice and encouraged all sides “to work to lower tension, reject violence, avoid all provocations, and seek a path toward peace.”

Israeli opposition leader Issac Herzog said Israel needed to take practical steps including arrest without trial or charge, as is done for Palestinian assailants, in order to stamp out the attacks.

“We are dealing with Jewish terror that we haven’t seen in a long time,” he said, at the hospital near Tel Aviv where Riham and Ahmad Dawabsheh were being treated. “This phenomenon must be uprooted.”

Other Israeli officials, including Netanyahu, visited the family at the hospital.

Herzog compared the attack to the killing last year of 16-year-old Palestinian Mohammed Abu Khdeir, who was burned alive last summer by Jewish extremists in a revenge attack for the kidnapping and murder of three Jewish teens. The violence eventually spiraled into what later became a 50-day war between Israel and Hamas militants in Gaza.

Tensions have been high since last year’s war and with no peace negotiations and the Palestinians taking their case to the international court, incidents such as Friday’s could easily spark wider unrest.

Friday’s attack forced those simmering tensions to boil over, with about 2,000 Palestinian protesters clashing with Israeli security forces in the West Bank city of Hebron at a previously planned demonstration, the military said. It added that forces fired into the rock-throwing crowd after it did not disperse and “a hit was confirmed,” without elaborating – a reference to someone being shot. Israeli forces shot at another Palestinian near the city of Ramallah, after he hurled a fire bomb at them, the military said. Palestinian hospital officials said he was in critical condition after being shot in the chest.

In Gaza, Palestinian health ministry spokesman Ashraf al-Qidra said the Israeli military shot and killed a Gazan man who had approached Israel’s security fence. The Israeli military said it did not know the man’s condition, but said troops opened fire at the man’s legs when he and another man neared the fence.

The Israeli military deployed troop reinforcements to the West Bank to quell further clashes and Netanyahu also placed a rare call to Abbas to express his outrage and call for calm.

In the village of Duma, the interior walls of the one-floor home were blackened and still radiated heat as Israeli police surveyed the scene Friday morning. A brown couch was covered in white ash as charred debris lay strewn around the property. A second house nearby, which was empty, was also set on fire.

Inside the torched home, relatives scraped through the ash and soot to salvage any belongings. They found a partly burnt photograph of the slain child and his bottle, still one-third full of milk.

“I never imagined that this could happen, that someone could come and burn people alive while they are sleeping,” said Hassan Dawabsheh, the slain child’s uncle. “I don’t know what those people were thinking. What do they have inside their hearts and minds?”