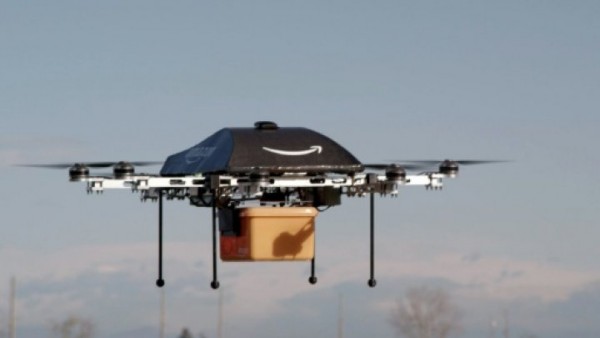 Online retail colossus Amazon wants to carve out a special zone of the sky to shuttle commercial drones that would deliver goods to its customers.

Kimchi proposed setting commercial drone zones between 200 and 400 feet (61 and 122 meters) above the ground, with a no-fly buffer of 100 feet above to keep them safely apart from other aircraft.

Less sophisticated drones, such as those used by hobbyists, could be given air space below that used by the faster, more sensor-equipped commercial models.

“Amazon believes the safest and most efficient model for sUAS (small Unmanned Aerial Systems) with mixed equipage and capabilities is in segregated airspace with a defined structure for operations below 500 feet,” said a written portion of the Amazon Prime Air presentation.

“The public and private sUAS industry should work together to realize this new concept of airspace operations if we are to bring the remarkable innovations of sUAS to bear in a safe and responsible way.”

Drones would need to meet technical standards to enter commercial drone zones, which would have their own air traffic control systems.

Amazon last month insisted on a significant change to proposed US drone regulations before it introduces 30-minute Prime Air parcel delivery by unmanned aerial vehicles to its American customers.

The online retail giant — a major player in the development of UAVs for civilian missions — acknowledged safety concerns as the Federal Aviation Administration hammers out a final set of commercial drone-flying rules.

But it balked at the FAA’s proposal, set out in a notice of proposed rule-making in February, that small UAVs fly only in full view of their operators on the ground — not at a distance beyond the line of sight.

Amazon disagrees with the FAA’s claim that flying drones beyond their operators’ line of sight is a major safety concern.

The FAA is poised to miss a September deadline for a long-awaited final set of rules to govern civilian drones in crowded US skies — prompting industry fears that the United States is falling behind other countries in developing high-value UAV technology.

As the world’s largest online retailer, Amazon raised eyebrows in late 2013 with its plan to airlift small parcels to customers by drone in select markets, less than 30 minutes after an order is received.

Frustrated by the lack of clear US rules, it has gone to other countries to flight-test its evolving technology, including a secret location in the western Canadian province of British Columbia.