What is Putin up to? Russian nuclear bombers flew within 40 miles of California coast 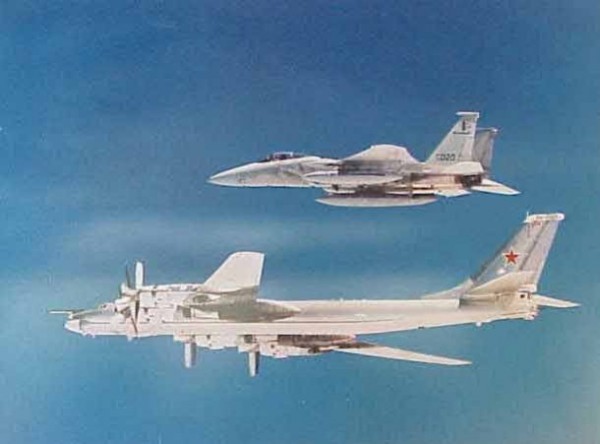 Two Russian nuclear bombers flew within 40 miles (64 km) of the California coast and one of the pilots relayed a veiled threat during the Fourth of July aerial incident, defense officials said.

“Good morning American pilots, we are here to greet you on your Fourth of July Independence Day,” a Russian Tu-95 Bear bomber crew member stated over the emergency aircraft channel.

Meanwhile, Russia’s across-the-board buildup of nuclear forces and revised doctrine are increasing the danger of a nuclear war, according to a think tank report on nuclear threats.

Defense officials and the Colorado-based U.S. Northern Command said this week that two U.S. F-15 jets intercepted the Russian bombers on July 4 as they flew as close as 39 miles from the coast of Mendocino County, north of San Francisco.

During the intercept, a crew member on one of the bombers issued a warning in a radio message, according to defense officials familiar with the incident this week.

Earlier the same day, the Bear bombers intruded on the U.S. air defense identification zone (ADIZ) near Alaska. The zone is a 200-mile controlled airspace patrolled by U.S. and Canadian jets under the North American Aerospace Defense Command (NORAD).

It was the second time the Russians conducted provocative bomber flights on the Fourth of July holiday. The last incident occurred on July 4, 2012, when two Bear bombers were intercepted off the California coast in what was then the closest such encounter near sovereign U.S. air space since the end of the Cold War.

A NORAD spokesman declined to comment on the exact distance from the coast the bombers had flown.

Two officials confirmed that the nature of the message from the Russian aircraft was a sardonic Independence Day greeting.

One official said the nuclear-capable bomber flights so close to U.S. shores are part of nuclear saber-rattling by Moscow, and much more of a concern than routine U.S. aerial surveillance missions near Russia’s coasts.

“These are nuclear-capable bombers and that is a big problem,” the official said.

A second official said the buzzing of the California coast coincided with a telephone call made that day from Russian President Putin to President Obama. The Russian leader called for more U.S.-Russia dialogue, Reuters reported.

NORAD said in a statement the Russian bomber flights were “potentially destabilizing.”

In the Alaska encounter earlier in the day, two U.S. F-22 fighters intercepted the Bear bombers along the south coast of Alaska near the Aleutian Islands around 10:30 A.M. eastern time.

The California bomber-fighter intercepts took place a half hour later as the propeller-powered aircraft moved south along the North American coast.

“Even though state aircraft are not required to file flight plans for flying through an ADIZ, such unannounced operations by Russian strategic bombers near the U.S. and Canada are potentially destabilizing,” a spokesman for NORAD said.

“The pattern of Russian provocative bomber flights is dangerous because it reflects a Russian view that nuclear attack threats can and should be used to get their way on whatever they are attempting to achieve,” he said.

Russia’s state-run Sputnik news reported Tuesday that despite its age, the Tu-95 is giving rise to fear in the NATO alliance because it “is capable of striking the United States with nuclear bombs.”

The report on nuclear threats, “Foreign Nuclear Developments: The Gathering Storm,” warns that Russia, China, North Korea, and Iran are substantially increasing nuclear weapons and delivery systems at a time when the United States is reducing its reliance on nuclear forces.

The report singles out Russia’s buildup of new missiles, bombers, and submarines, combined with aggression in Ukraine and its leaders’ public nuclear threats, as especially alarming.

Russia’s new military doctrine, unveiled in December 2014, states Moscow will use nuclear arms if attacked with either nuclear or conventional weapons.

The new doctrine has resulted in substantial increases in spending on new weapons, two new types of ICBMs—the Topol-M Variant 2 and the Yars—a new multi-warhead submarine missile called Bulava-30, a new class of missile submarines known as the Borey-class, upgrades for older bombers, and a new long-range strategic cruise missile called the Raduga.

The Raduga is viewed by U.S. military officials as a new strategic threat to the U.S. homeland.

“While many in the West believe that the end of the Cold War has meant the end of a confrontational and adversarial relationship with Russia, recent events suggest this hoped-for outcome is more the result of wishful thinking than of a sober and realistic assessment of the current geostrategic environment,” the report says.

“Under these circumstances, the possibility that Russia may trigger events leading to their actual use of nuclear weapons cannot be dismissed out of hand.”

Putin was quoted in Russian state media saying Moscow was set to place its nuclear forces on alert during the March 2014 annexation of Crimea.

The Russian leader also has said Moscow is “one of the world’s biggest nuclear powers. These are not just words—this is the reality.” And in March he said, “Our nukes are always ready for action.”

The report said Russian bombers have penetrated NATO airspace and overflown Japan, and Russian nuclear forces have conducted mock drills simulating coordinated strikes against the United States and its allies.

The Obama administration sought a “reset” in relations with Russia by offering concessions and adopting conciliatory policies. Instead of moderating Moscow’s policies, Russia under Vladimir Putin has become more aggressive and threatening.

“Senior Russian officials, including President Putin, have threatened that NATO allies may be targets for Russian nuclear forces, and President Putin has suggested he would have used nuclear weapons, if necessary, in the Russian invasion of Crimea,” the report says.

The report was produced by the Virginia-based National Institute for Public Policy whose experts include several former Pentagon strategic nuclear experts.

“This new report helps to explain the reality that ‎other states, particularly Russia, China, North Korea and Iran never bought into the West’s vision of a cooperative new world order and have continued to emphasize nuclear programs,” Payne said.

China also is becoming more threatening and building up its nuclear and missile forces.

“Chinese nuclear modernization is an element of a much broader military modernization program that is aimed ‘at winning short-duration, high-intensity conflicts against high-tech adversaries…’—considered to be the United States and its Asian allies,” the report said, adding that Chinese secrecy has successfully prevented an accurate count of its warheads.

Current estimates of Chinese warheads range from several hundred to more than 3,000.

Its missile forces are the largest in the world and include several thousand ballistic and cruise missiles with varying ranges, and many with multiple warheads.

North Korea’s nuclear forces also are expanding, with Pyongyang seeking an arsenal of between 100 and 200 weapons by 2020, and long-range missiles capable of hitting targets in the region and throughout the United States.

“North Korea’s training has recently exhibited more realism,” the report said. “Usually the North Korean regime is secretive about its exercises, but when expedient, it will talk about military preparations for a nuclear strike. Nuclear threats are sometimes made in the context of the North Korean leader observing or directing military exercises.”

Iran denies it is seeking nuclear weapons, however, regional states are concerned Tehran is continuing to put in place all the elements of a nuclear weapon force, including the infrastructure for building warheads and long-range missiles that can deliver them.

“The possession of nuclear weapons would permit more aggressive Iranian support of terrorism, which is already extensive. It would also provide Tehran a tool for coercion against its perceived enemies, while seeking to deter U.S. or allied actions,” the report said.

Recent Iranian missile exercises have demonstrated “salvo” strikes that are indications that Iran is developing tactics for nuclear attacks, the report said.

“Iran has substantial programs underway aimed at achieving a long-range nuclear strike capability,” the report said. “Due to years of cooperation with North Korea, Iran’s nuclear and missile programs are probably considerably more advanced than might be the case for a purely indigenous program.”

“Moreover, this does not even assume Iranian cheating on the agreement, which cannot be discounted in light of verification problems and previous Iranian behavior,” the report said. “Indeed, the end of sanctions against Iran could provide critical resources for more covert nuclear weapons activities.”

The report discussed U.S. and western efforts to produce a world free of nuclear weapons, noting that the efforts of Russia, China, North Korea, and Iran show that goal to be “further from reality than ever.”

The increased reliance on nuclear arms by America’s enemies, coupled with reduced U.S. emphasis on strategic nuclear forces, does not bode well for maintaining strategic nuclear deterrence, the report said. The authors urged policymakers to take heed of growing nuclear threats as they craft security policies for the 21st Century.

The report also disputed anti-nuclear advocates in favor of eliminating land-based U.S. missiles in favor of bomber-delivered and submarine-launched missile forces, and eliminating non-strategic nuclear arms and reducing investments in the nuclear arsenal.

Such advocates “appear to ignore the greater emphasis placed by others on nuclear weapons and their relative importance as a counter to U.S. conventional force dominance, a deterrent to U.S. military actions, and an enabler of their own aggressive policies,” the report said.

“As the Cold War recedes further into history, the nuclear threats posed by others to the United States and the West have not. In fact, the opposite appears to be the case,” the report concludes.