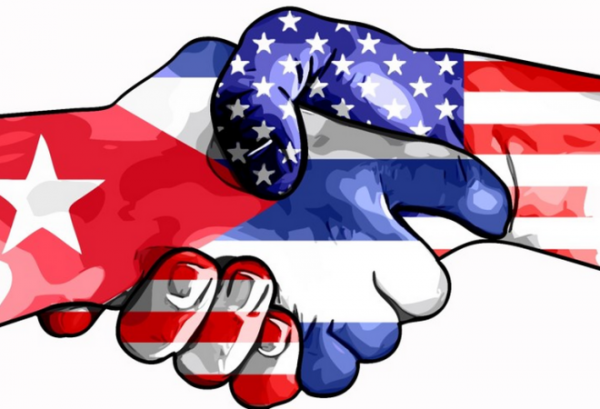 The United States and Cuba quietly ushered in a new era of post-Cold War relations on Monday, formally restoring diplomatic ties severed more than five decades ago and re-establishing embassies in each other’s capitals.

Just past the stroke of midnight, the two countries reached a new milestone in the historic thaw that began with a breakthrough announcement by U.S. President Barack Obama and Cuban President Raul Castro on Dec. 17.

Foreign Minister Bruno Rodriguez will preside around 10:30 a.m. over the raising of the Cuban flag for the first time in 54 years over a mansion that will again serve as Havana’s embassy in Washington.

The hugely symbolic event will be followed by a meeting at the State Department between Secretary of State John Kerry and Rodriguez, the first Cuban foreign minister on an official visit to Washington since the 1959 Cuban Revolution.

While the Cubans hold their ceremony, the U.S. Embassy in Havana will also reopen. But no American flag will fly there until a visit by Kerry expected next month. “We wanted the secretary to be there to oversee these important events,” a State Department official said.

Differences remain and efforts toward full normalization between the United States and the Communist-ruled island are expected to proceed slowly. Monday’s steps culminated more than two years of negotiations between governments that had long shunned each other.

More than 500 people will attend the Cubans’ festivities in Washington, including members of Congress. No invitations went out to hardline anti-Castro lawmakers. The U.S. delegation will be headed by Assistant Secretary of State Roberta Jacobson.

Kerry and Rodriguez last met in April at the Summit of the Americas in Panama, where Obama and Castro also held talks. Aides see the outreach to Cuba as a boost to Obama’s legacy.

The re-establishment of embassies, agreed to on July 1, opens a new chapter of engagement by easing government contacts heavily constrained since the United States broke off relations in 1961.

A full-service U.S. mission in Havana could offer some reassurance to companies interested in investing in Cuba and also help seed the way for more – although still heavily restricted – travel to the island by American citizens.

The normalization process has been slowed by lingering disputes, including over human rights, as well as Havana’s desire to keep a tight rein on its society and state-run economy.

A U.S. economic embargo against Cuba will remain in place, and only Congress can lift it.

Even so, before dawn on Monday, the State Department planned to hang a Cuban flag in its lobby among the banners of other countries with which Washington has relations.