Economists were right : The Euro has turned Into a liability 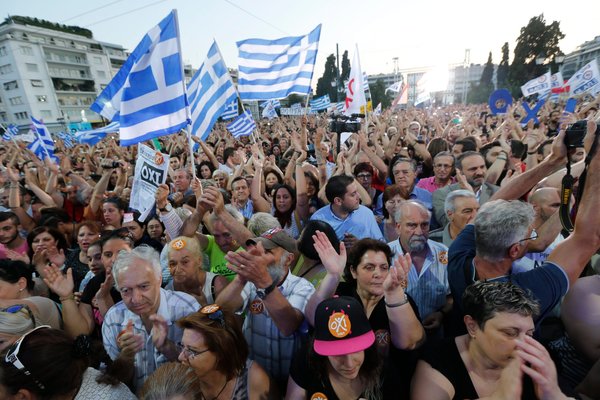 A demonstration in early July in Athens urging a “no” vote on the referendum on a bailout. Credit Armando Babani/European Pressphoto Agency
Share:
By N. GREGORY MANKIW
The continuing saga of Greece and its creditors is more tragic than comic. But watching it, I am reminded of that old line about the recurring travails of Laurel and Hardy: “Well, here’s another nice mess you’ve gotten me into!” For the problems facing Europe today are not sui generis. They are merely the latest installment of a story that has been unfolding for many decades.

Let’s begin by flashing back to the middle of the 1990s. If you travel around Europe, you find each nation with its own currency — francs in France, marks in Germany, pesetas in Spain, and drachmas in Greece. But change is in the works. Within a few years, much of Europe is trading a single currency, the euro. Over time, more nations join the currency union. Today 19 European nations use the euro as their sole currency, including (at least for now) Greece.

When the euro was introduced, many economists were skeptical about the change. One skeptic was Milton Friedman, the Nobel laureate who dominated much macroeconomic debate in the second half of the 20th century.

In 1997 he wrote: “Europe’s common market exemplifies a situation that is unfavorable to a common currency. It is composed of separate nations, whose residents speak different languages, have different customs and have far greater loyalty and attachment to their own country than to the common market or to the idea of ‘Europe.’ ”
Mr. Friedman concluded that the adoption of the euro “would exacerbate political tensions by converting divergent shocks that could have been readily accommodated by exchange rate changes into divisive political issues.”

Another euro skeptic was Martin Feldstein, my colleague in the Harvard economics department and, from 1982 to 1984, chief economist to President Ronald Reagan. Also writing in 1997, Mr. Feldstein called the euro “an economic liability.”

But why? Monetary union works well in the United States. No economist suggests that New York, New Jersey and Connecticut should each have its own currency, and indeed it would be highly inconvenient if they did. Why can’t Europeans enjoy the conveniences of a common currency?

As a result, Mr. Friedman and Mr. Feldstein contended that the nations of Europe needed a policy tool to deal with national recessions. That tool was a national monetary policy coupled with flexible exchange rates. Rather than heed their counsel, however, Europe adopted a common currency for much of the Continent and threw national monetary policy into the trash bin of history.

The motive was more political than economic. Europeans believed that their continent, once united with a common market and currency, would provide a better counterweight to American hegemony in world affairs. They also hoped that a united Europe in the 21st century would damp down the nationalist sentiments that led to two world wars in the 20th.

Now flash back even further, to 1919. World War I is over, and the great British economist John Maynard Keynes publishes “The Economic Consequences of the Peace,” an extended critique of the Treaty of Versailles. His main concern is that the treaty left Germany saddled with too much debt.

Supporters of the treaty, including President Woodrow Wilson, are adamant that Germany pay sizable reparations for its previous misbehavior. Mr. Keynes, however, is looking forward rather than backward, and he is more concerned about ensuring prosperity for all European nations. While Wilson seeks contrition, Keynes seeks mercy.

In the light of subsequent history, including the fall of the Weimar Republic and the rise of the Third Reich, Mr. Keynes seemed to have had the better argument. That fact was not lost on policy makers. At the end of World War II, the victors were more interested in bringing Germany and Japan into the community of nations than in seeking retribution for past sins.

Flash-forward to today. Greece finds itself overwhelmed by its accumulated debts. To be sure, it bears primary responsibility. The Greek government borrowed too much, and for years it hid its fiscal problems from its creditors. Once the truth came to light, a large dose of austerity was the only course left. The result was an economic downturn with a quarter of the Greek labor force now unemployed.

Making matters worse, however, was the common currency. In an earlier era, Greece could have devalued the drachma, making its exports more competitive on world markets. Easy monetary policy would have offset some of the pain from tight fiscal policy. Mr. Friedman and Mr. Feldstein were right: The euro has turned into an economic liability that has exacerbated political tensions. For this, the European elites who pushed for the currency union bear some responsibility.

As creditor nations and international institutions sort through the wreckage, it is worth bearing in mind the lessons from Mr. Keynes. A nation can withstand only so much economic pain before the political fallout becomes ugly. And that fallout can extend beyond the border of the problem nation.

Yes, the Greeks have every reason to be contrite. But it might also be wise for the rest of the world to show some mercy.
THE NEW YORK TIMES