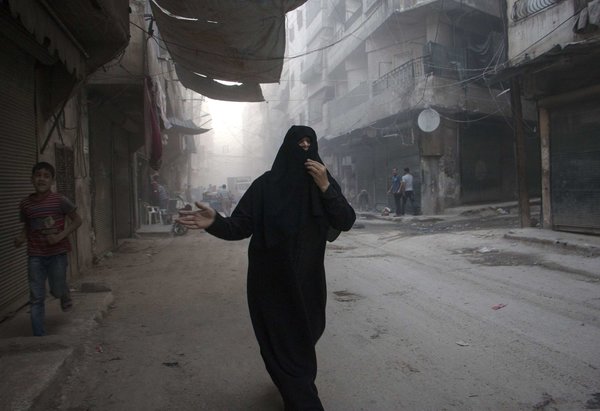 A woman and a boy fleeing in Aleppo, Syria, after a reported barrel bomb attack. The country’s civil war has been going on for four and a half years and has claimed more than 230,000 lives. Credit Karam Al-Masri/Agence France-Presse — Getty Images
Share:

BEIRUT, Lebanon — Syria is falling apart, as warring groups carve it into de facto fiefs, and it is increasingly hard to see how its disintegration can be reversed.

Within the country, no single group can muster enough territory or popularity to win an increasingly fragmented war — or even to negotiate and enforce an eventual peace. From outside, regional and global powers tug at the country in a proxy fight for their own interests, but none of them have the influence or, apparently, the will to reunite Syria.

In the crucible of war, as the Middle East undergoes its broadest reshaping since the collapse of the Ottoman Empire in the early 20th century, de facto spheres of influence and control are crystallizing, even as official borders remain unchanged.

The militant group Islamic State, also called ISIS or ISIL, is solidifying its rule in Syria’s eastern half, alongside its territory in neighboring Iraq. The local affiliate of Al Qaeda, the Nusra Front, and other insurgent groups — mostly Islamist, some relatively secular — are staking out territory in the northwest and the south.

To the northeast, Kurdish militias, increasingly backed by American air power against the Islamic State, are testing how far they can expand their semiautonomous areas. The Lebanese Shiite militant group, Hezbollah, allied with Iran and the Syrian government, is taking control in more areas along the Lebanese border, most recently attacking the insurgent-held town of Zabadani.

President Bashar al-Assad has lately focused less on holding or retaking outlying areas and more on fortifying his most defensible stretch of territory, from Damascus to the Mediterranean coast. That makes it newly conceivable that the Syrian government could end up withdrawing to a rump state there.

That prospect has even the government’s most powerful ally, Russia, worried about how extremist groups might exploit a sudden collapse, President Obama said in an interview on Tuesday. President Vladimir V. Putin was concerned enough, Mr. Obama said, to reach out to him “a couple of weeks ago” to talk about Syria.

“That offers us an opportunity to have a serious conversation with him,” Mr. Obama added, suggesting that Russian worries could lead to new cooperation on Syria.

At the same time, Mr. Assad’s allies in Hezbollah are acting to preserve their interests regardless of Mr. Assad’s fate. They are taking control in more areas near the Lebanese border, taking the lead in battle in the places most important to them and their patrons in Tehran, rather than counting on Mr. Assad’s stretched forces.

Syrian Army troops are being whipsawed between gestures at trying to hold the whole country — sometimes making last stands in far-flung places — and surprisingly quick withdrawals from areas outside the government’s core territories.

And there is little sign that even the world’s most powerful countries wield enough influence to control events on the ground. The United States and its Arab allies have often done more to divide than to unite the insurgent groups they back to varying degrees.

Mr. Assad has more reliable allies, but their help is no closer to producing victory. Russia has shown little progress in efforts to restart peace talks, and is increasingly concerned about gains by the Islamic State.

“I think they get a sense that the Assad regime is losing its grip over greater and greater swaths of territory inside of Syria,” Mr. Obama said in the interview, “and that the prospects for an Al Nusra or ISIL takeover or rout of the Syrian regime is not imminent but becomes a greater and greater threat by the day.”

Even Iran, the Syrian government’s closest ally and arguably the most engaged of the foreign players, has only so much ability to steer the conflict, despite the new confidence it has gained from the deal on its nuclear program.

On the ground, Iran’s recent moves suggest that it is turning toward what analysts in the region call “Iran’s Plan B,” conserving resources to defend the strip that includes the coast, the Lebanese border and Damascus.

That theory gained currency among both supporters and opponents of Mr. Assad in recent months, as a series of routs and retreats made the government look more strained than it has since late 2012, before Iran and Hezbollah came forcefully to its aid.

The cascading new developments began in March, when the Nusra Front and other insurgents took the provincial capital of Idlib, and continued in May as the Islamic State seized the city of Palmyra.

The precipitous government withdrawals, and the lack of Hezbollah fighters on those fronts, gave rise to speculation among Syrians that Iran and Hezbollah were unwilling to help the increasingly dependent Mr. Assad hold heavily Sunni areas that were of little strategic importance to them.

“People are starting to say, where is Iran, where is Hezbollah?” said a Syrian with close ties to the security establishment, who spoke on the condition of anonymity for his safety.

Many veterans of Mr. Assad’s government and army — like many of their counterparts who defected to the insurgency after the government cracked down on protesters — consider themselves Syrian patriots duty-bound to hold the country together.

But the top strategic concern of Iran and Hezbollah is to keep control over the Lebanese border, which they need to preserve the corridor for delivering the Iranian arms that give Hezbollah its clout against Israel and in Lebanon.

Hezbollah’s leader, Hassan Nasrallah, as recently as last weekend reaffirmed the group’s commitment to fighting anywhere it is needed in Syria. But its main deployments remain in the priority zone.

Iran, which has kept the Syrian government afloat with billions of dollars of credit and other aid, has the clout to insist on its priorities. Some loyalists even wondered if the latest $1 billion credit line, signed on May 19, was conditioned on the withdrawal from Palmyra, which fell the next day. While there is no evidence of a direct link, the speculation illustrated a deepening mistrust.

At the same time, there were unconfirmed reports from loyalists on the coast of a large new force arriving there, numbering as many as 10,000 to 20,000 fighters, from Iran. The Syrian government is building a new force called Coastal Shield, allowing residents of the coast to serve there instead of reporting to the army on more distant front lines.

Few Syrians on any side say they want to break up the country. Even the Islamic State, battling both rival insurgents and the government, dreams of ruling all the country and beyond. But in practice each group is digging into its strongholds, sketching a provisional set of new informal boundaries within Syria.

“The Assad government is weakening, but it isn’t going to disappear, and there is sharp competition between the armed factions, with none strong enough to vanquish the others,” Robert S. Ford, a former American ambassador to Syria and a senior fellow at the Middle East Institute, wrote recently.

Nevertheless, military strategists are making contingency plans for the government’s sudden collapse or retreat from Damascus.

Gen. Martin E. Dempsey, the chairman of the Joint Chiefs of Staff, said last week that the Pentagon was mulling what to do if Mr. Assad abandoned the capital, leaving an array of insurgents and rump pro-government militias to fight for Damascus, an ancient city at the heart of the Arab world.

He said that military officials in Jordan and Israel “very much believe” such a situation is possible.

“We don’t want this to be a foot race, if it occurs, between Al Nusra and ISIL, all of these other groups converging on Damascus,” he said. “We’re in consultations, even as I sit here with the Turks, the Israelis and the Jordanians about that scenario.”