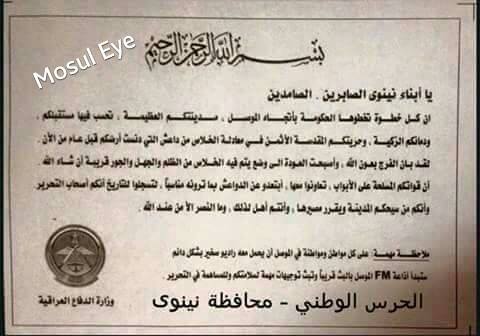 Iraqi jets dropped leaflets over Mosul telling residents that Islamic State fighters would soon be driven from the northern city, saying details of the operation would be broadcast on a new radio station.

The city has been under Islamic State control since the Islamist militants took over in June last year, sweeping through most of Iraq’s Sunni Muslim provinces towards Baghdad.

The Shi’ite-led government has promised a military offensive to retake Mosul but progress has been slow, in part because of Islamic State gains elsewhere. In May, they drove the army out of the city of Ramadi, capital of the western province of Anbar.

“The solution, with God’s help, is close,” said the leaflets, which were issued in the name of the Iraqi army and were dropped over Mosul on Friday. “Your armed forces are at the gate, cooperate with them.”

Despite that promise, there has been no sign of an imminent military operation against Islamic State in Mosul.

The leaflets also promised a new radio station, Mosul FM, would start broadcasting soon and urged residents to carry a small radio with them at all times to receive instructions about the battle for Mosul.

Mosul residents contacted by telephone said Islamic State fighters were deployed in the areas of the city where the leaflets were dropped, telling passers-by to stay away.