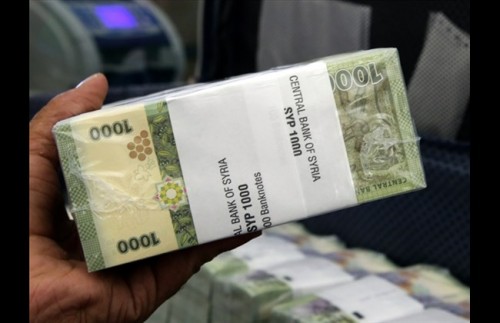 During a press conference held at the CBS’s headquarters, Governor Adib Mayyaleh said the bank started issuing new banknotes of SYP 50, 100, 200 and 500 since 2010 ” with the aim of improving  the  quality of paper currency in circulation and  help maintain its  integrity .”

The new banknotes will be put at ATMs in the provinces of Damascus, Lattakia and Tartous on Wednesday, and successively in all other provinces, the SANA report added

On August 1st, 2014, the CBS put into circulation a new SYP 500 banknote and withdrew by the same number and value the old and worn-out currency from the market to avoid imbalance in exchange rates and inflation.

Mayyaleh  noted that the new banknotes have been printed in Russia and that they are of high quality in terms of the materials used and the technical specifications to prevent counterfeiting.

He  also pointed out that the CBS is studying the market’s need for issuing a new SYP 2,000 banknote.

The new SYP 1,000 banknote  does not carry the image of former president Hafez al Assad . It has  the  image of the ancient Roman Theatre at Bosra featured on its front side and the Roman mosaic painting discovered in Sweida on its back side.